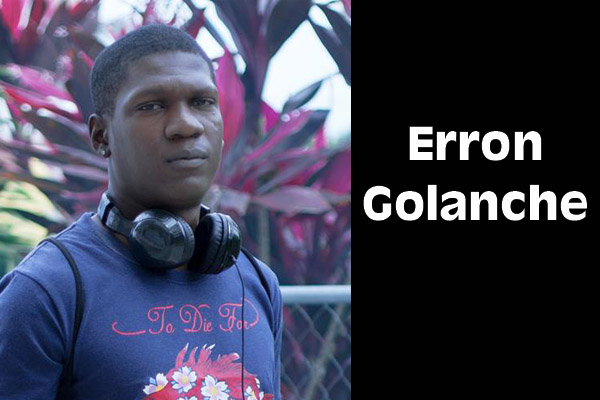 A well-known young artist who was originally from Belize City and who had a very promising future because of his natural, raw talent, lost his life at the hands of a drunken driver in Orange Walk Town on Independence Day eve. His untimely death was as a result of a hit-and-run accident in which he and another man were violently flung from a scooter that he was driving.

According to eyewitness accounts, Erron Golanche, 25, popularly known as “The Human Beat Box,” was reportedly returning to his Orange Walk Town residence after making a trip to a convenience store sometime before 11:00 p.m. on Friday, September 20, 2013, when he and his companion, Fernando Ical, were suddenly hit by a Dodge Ram pickup truck. Ical is the brother of Golanche’s common-law wife, Love FM reporter Dalila Ical.

After hitting the scooter, the pickup’s driver, who was reportedly highly intoxicated, continued on his destructive journey in a daze, dragging portions of the extensively damaged scooter under his vehicle for almost a quarter mile, or about 400 feet, after which he was forced to come to a halt. This was because a piece of the wrecked scooter obstructed the Dodge Ram from continuing on its path.

Thwarted, but determined to abandon the accident scene, the allegedly drunken driver exited the vehicle and made good his escape. Meanwhile, back at the scene of the accident, Fernando Ical had suffered a broken left leg and multiple head injuries, but Golanche’s injuries had been fatal.

Dennis Arnold, O.C. Orange Walk Police, told Amandala that they are currently seeking the driver of the pickup, who has been identified as Freddy Herman Villeda, in connection with the incident.

Amandala spoke with Golanche’s sister, Elva Yearwood, who told us that they were first notified about the incident sometime after 11:00 on Friday night but they did not receive the full details of what happened until Saturday morning. She mentioned that there was a van traveling ahead of her brother, and the pickup was traveling behind. She said that two women who were the occupants of the van driving ahead of Golanche said that they had seen that the pickup was swerving across the road, and this prompted them to drift to the side of the road and park. Then they noticed that the driver of the pickup swerved out again. This is when he ran into the two men on the motorcycle. She noted that the women mentioned that after causing the accident, the driver continued driving even though he must have known that pieces of the motorcycle were under his vehicle. After the driver realized that he had knocked down the two men, he reportedly stopped in the middle of the road and ran away from his vehicle.

An emotional Yearwood told us that the death of her brother was unexpected, and she doesn’t believe that he deserved to die in such a manner. She said that his death has taken a huge toll on her family and affected them tremendously, because they underwent a similar experience, which has gone unsolved, within the last two years. They fear that Golanche’s death may go unsolved as well, especially since they have heard that the driver is a Central American national.

Yearwood has conceded that nothing can bring back her brother at this point in time, but they are seeking justice for his death. She mentioned that Golanche was an easygoing individual who never had any conflicts with anyone and was always willing to help.

Yearwood told us that she does not have anything to say to the driver responsible for her brother’s death, because everyone has a heart, a mind and a conscience, and although it may not bother him right now, his crime will linger in his thoughts and burden his conscience in the future, especially if he remains a fugitive.

Yearwood also took the opportunity to remind drivers who have a habit of driving under the influence of alcohol to heed their conscience, since they are aware that they put the lives of others at risk when they drink and drive.

Erron Golanche was a graphic designer at Nokturnal Studios located in Orange Walk. He also appeared on numerous talent shows – most recently on Channel 5’s Be The Next Superstar. He was also a member of the music group, “Acafellas,” in which he “beat boxed” to the tune of his fellow rap musicians. Erron will surely be dearly missed by his family, friends and loved ones in Belize City and Orange Walk Town.

His family is requesting some assistance with burial expenses, and they hope to move on with their lives, even though it will not be the same.