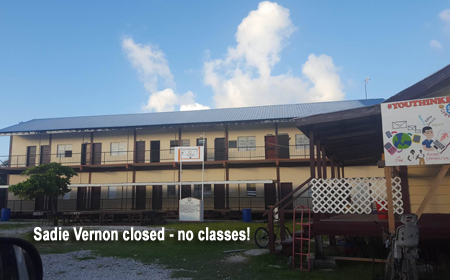 BELIZE CITY, Thurs. Jan. 5, 2017–In a memo issued at the end of last year, the Ministry of Education and the Managing authorities of pre-primary, primary and secondary schools, indicated that students and teachers should return to their classrooms on Tuesday, January 3, to make up for time lost during last year’s eleven days of protests.

Despite that official announcement, the usual stampede of uniformed students trafficking through the streets of the old capital en route to school was not observed this week.

Instead, a majority of teachers and students enjoyed the full three weeks due during the Christmas break, as endorsed by the Belize National Teachers’ Union (BNTU), which called for a return to classrooms on Monday, January 9, instead.

According to a principal who spoke with our newspaper today, Thursday, this week was another victory for the BNTU, which stood firm against the Ministry.

When Amandala asked how time would be made up, she told us: “the only next option to make up time is to have a 9th class session added to the daily school schedule.”

The school’s managing authorities and the Ministry of Education have not sent any further instructions to teachers, she explained.

Tonight, our newspaper contacted Education Minister and Deputy Prime Minister, Patrick Faber, but he claimed that he was out of the country and was not abreast of recent happenings.

He told us that upon his return to the country on Monday, he will speak with the media.

With strained relations between the Ministry and the BNTU, teachers, student and parents, as well as bus operators and vendors, have been impacted.

Floyd Myvett, 28, a bus driver for almost 7 years, said that the bulk of bus fares are made from students.

On an average trip during rush-hour, he would carry as many as 50 students. However, since Tuesday, there have been 15 students on average.

Vendors are also seeing slower days. A vendor who sells food at a high school on the south side of Belize City told our newspaper that every midday, the school where she sells had been dismissing its students from classes because few students and teachers appeared.