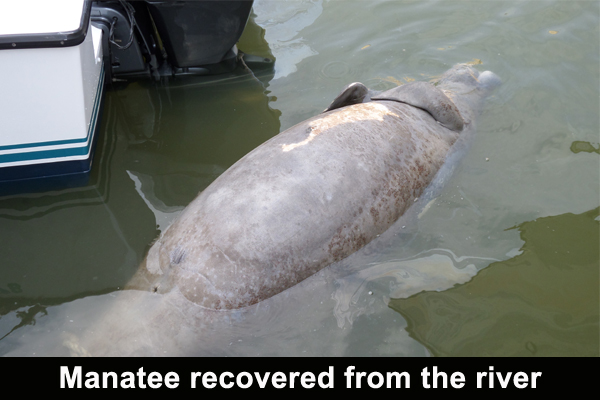 Too many manatees killed within too short a space of time

Despite the plea of the Fisheries Department and other agencies to boat operators travelling in the Haulover River to be very careful in order to avoid hitting or killing the slow-moving manatee with their boats, a total of four large manatees – members of an endangered species that is protected by law – were killed this week. The most recent discovery was made in the area of the Tourism Village, where a large manatee was found dead, where the Haulover Creek meets the sea, by the crew on a boat on Friday morning.

The animal was seen with chop wounds on the back, caused by a boat propeller.

Gilbert Pike, 35, a worker on the Kremandala compound, said that on his arrival in the area of the Water Taxi Terminal on Friday morning, he saw the manatee floating in the river. He immediately recovered the dead animal and secured it to the wharf near the Caye Caulker Water Taxi, opposite the Tourism Village, to prevent any possible boat collision with the carcass. The animal was buried later that same day.

Jamal Galvez, program coordinator of the Belize Manatee Conservation Program, said that the death of four manatees within just a week is alarming.

Three of the manatees were killed by boats hitting them in the no-wake zone near Haulover Bridge, where boats should be travelling especially slowly, and the fourth one, seen by Galvez, was killed by a boat near the cruise terminal. He thinks that this manatee died almost immediately from the huge chop wounds that it sustained across the back, which penetrated some of its vital organs.

Galvez continues to appeal to boat users travelling in the Haulover River and other areas where manatees are known to be present, to be very careful, and to be on the lookout for them and avoid hitting them.

If any of the animals are seen injured, the Belize Manatee Conservation Program should be alerted.