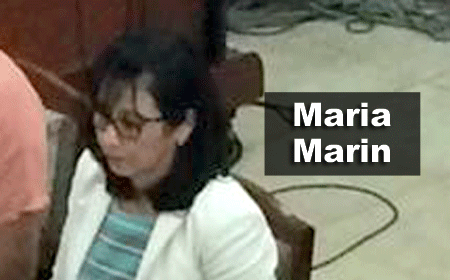 BELMOPAN, Cayo District, Wed. Nov. 29, 2017–During her appearance before the Senate Special Select Committee today, former Director of the Immigration and Nationality Department, Maria Marin, revealed that the first thing she did when she was handed the reins of the department was to implement a new visa application process.

She said that the process prior to her taking charge was, “a very haphazard one,” in which applicants recommended by UDP Ministers and caretakers bypassed certain required procedures.

Marin was quizzed by the committee for more details. Here is the exchange that took place:

Senator Mark Lizarraga: “There were certain applications that came from certain people, from ministers and caretakers, that did not go through the full process?”

Maria Marin: “Apparently. Before I came to that desk, that seemed to be the case.”

Senator Lizarraga: “But you were insistent that the process now be put in place.”

Marin: “And that every application follows that process.”

Senator Lizarraga: “And that did not bode well?”

Marin: “In my opinion, that did not bode well because there were many complaints, and there were many indications that many people considered me inflexible or unreasonable or petty.”

Senator Elena Smith: “You state… ‘all applications supported by ministers, caretakers, would come to the ministry for initial vetting, and the ministry would then hand over to the Director of Immigration under confidential cover’. Could you expound on that please?”

Marin: “That is a quote taken from a document that was provided to me by the substantive minister, where he outlined the indications, step by step…if you allow me I will read from the document. It says, ‘discussion was held among the abovementioned persons with a view to determining a straightforward way of processing visa applications. After much discussion, the following was decided: All applications supported by ministers/caretakers would come to the ministry for initial vetting. The ministry will then hand them over to the Director of Immigration under confidential cover. Ministers or caretakers shall not act as agents or sponsors, but simply as support for the applicant or sponsor’.”
Senator Smith: “And was that the normal process that these applications go to, to the ministry?”

Marin: “No, that was not the normal process.”

Senator Smith: “And so when you refer here as ‘confidential cover’, what exactly do you mean?”

Marin: “They would come under cover memo and addressed directly from the CEO to the acting Director.”

Smith: “So that would go directly to the acting Director at the time?”

Marin: “That’s the instructions that this document is giving.”

Senator Smith: “Right. So you are agreeing that they disregarded the process for these specific ones?”

Marin: “Yes, because the application should have come to the department.”

Senator Lizarraga: “What I’m hearing is that basically, if a recommendation for a visa, or a request for assistance for a visa, came by way of a minister or a caretaker, as we’ve seen the lists and the letters, they were never refused. That was your instruction—they were not to be refused.”

Lizarraga: “In other words?”

Marin: “It would go to the Ministry for initial vetting and then it would come to me. My insistence was that these applications would have to go through the normal process while at the Department.”

Senator Lizarraga: “But these people got to the head of the line, so to speak?”

Marin: “Basically that was the consideration, because the ministry had asked that we expedite, and so we were conceding to the expediting within the 5 days as a consideration to the ministers.”

Senator Lizarraga: “But you are saying—under your time, at no time did that 5 working day limitation stop you from doing full vetting?”

Senator Lizarraga: “You did not shortcut that process?”

Senator Lizarraga: “And if the 5 days were not enough, what would happen?”

Marin: “We would just have to wait.”

Senator Lizarraga:”But you ensured that the full process was completed during your period?”
Marin: “Yes.”

After two hours, the testimony of Maria Marin, former Director of the Immigration and Nationality Department, came to an end. The next, and final witness to appear before the committee, will be Auditor General Dorothy Bradley.