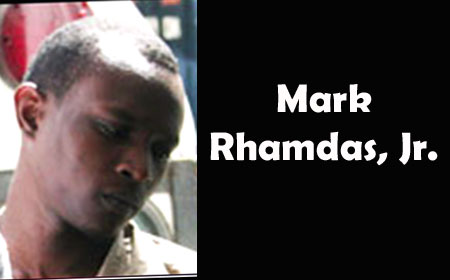 BELIZE CITY, Thurs. Apr. 9, 2015–The gun violence in Belize City has again claimed a life. Mark Anthony Rhamdas, Jr., 25, a resident of Albert Street West, was shot in the chest and abdomen at about 6:00 last night by an unknown killer who ambushed him and his girlfriend, Etheline Mejia, 21, also of Albert Street, as they were traveling on his motorcycle through an unnamed alley between Southside Meat Shop and U2 Shop.

Both Rhamdas, the father of four children, and his girlfriend were hit by the shots fired by the unknown assailant, and the killer then escaped out of the area.

Rhamdas, who is well-known to police, was a former “tumbler” who participated for many years in acrobatic performances, known locally as “tumbling”, during parades or other events in the city.

Reports are that Rhamdas ran out of the alley into Albert Street West holding his chest and shouted that he had been shot. He collapsed at the entrance to the alley and people in the area rushed him and his girlfriend to the Karl Heusner Memorial Hospital, where he was pronounced dead on arrival.

His girlfriend was admitted to ward in a serious but stable condition; she had been shot once in the left foot and twice in the left buttocks.

Police Superintendent Hilberto Romero said that they are reviewing camera footage of the area, and conducting interviews. One person has been detained, but so far, no one has been arrested.

Romero said that Rhamdas had been a suspect in connection with reported incidents of robbery, shooting and drug possession, but the motive for his murder is unknown, and they cannot say whether the shooting which led to his death is gang-related.

He said that Rhamdas and Jaimie Chavarria, who was shot dead on Berkeley Street on the night of March 30, were friends, but he is not sure if there was any link between the two deaths.

Police reports are that on February 21, 2012, Mark Ramdas pleaded guilty to drug trafficking, and was remanded for armed robbery after he appeared in the Magistrate’s Court.

The Gang Suppression Unit had conducted a search at his house on Albert Street West, while he was at home with his girlfriend and mother-in-law, and when police began searching the yard, Rhamdas told the officers that he was in possession of marijuana.

When the officers found a plastic bag containing marijuana, all three of them were arrested and jointly charged with drug trafficking.

In court Rhamdas pleaded guilty to the charge, but when Senior Magistrate Sharon Frazer asked him if he knew that the offence carried a maximum penalty of 3 years imprisonment and a $10,000 fine, he explained to the magistrate that he was only making the plea so that his girlfriend and her mother could be freed of the charge.

However, while in court, an additional charge of armed robbery was brought against him. Police alleged that on February 18, 2012, Rhamdas robbed Fredrick Trapp of $750 at gunpoint.

For the marijuana charge, Rhamdas was remanded into custody until April 10, 2012, while his girlfriend and mother-in-law were granted bail of $6,000 plus two sureties.

Romero said that the area where the shooting occurred is frequently patrolled by the tourism police, but he believes the shooter took the opportunity to ambush Rhamdas when the police left the area briefly.