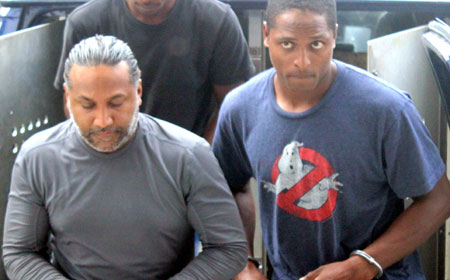 BELIZE CITY, Tues. July 19, 2016–Five men accused of a bizarre homicide appeared this morning in Chief Magistrate Ann Marie Smith’s courtroom for a second attempt at charging them in court for the murder of Pastor Llewellyn Lucas, whose decapitated head was found in their possession when police searched a vehicle in Belmopan last Friday, July 15.

The accused men — William Donny Mason, 46, aka “Ted Aoellett”, said to be the mastermind; and his co-conspirators Ernest Castillo, 20; Keron Fernandez, 29; Ashton Vanegas, 29; and Terence Fernandez, 30 — are all being represented by attorney Herbert Panton from the law firm of Lindo and Company. 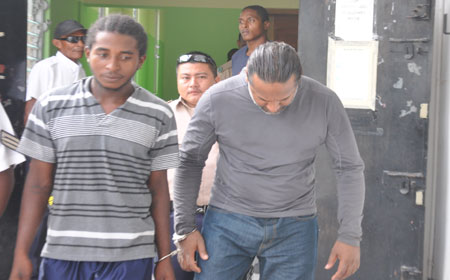 Yesterday, the men appeared before Magistrate Ladonna John in the Belmopan Magistrate’s Court, but the they were not arraigned on the charges because Panton objected to the Magistrate reading the charges to them on the ground that the men were not given proper disclosure of the evidence against them under the new rules laid out by the Supreme Court that came into effect earlier this year.

In addressing the court this morning, Panton described the prosecution’s attempt to have the charges read to the accused men as “nothing more than forum shopping.”

Panton then went into a lengthy submission about the quality of the police’s evidence and attempted to urge the court not to read the charges, but to stand down the matter for two weeks until the prosecution “can arrange the facts and put its ducks in a row.”

“It is the highest measure of injustice to charge these men,” Panton told the court, and added, “these facts go no further way in putting a prima facie case before Your Honor.”

He said that the prosecution’s evidence that has been provided so far is a hodgepodge of made-up stories.

Panton spoke about the kidnapping of two other persons, how they were blindfolded and asked to leave Mason’s farm, but did not dwell on the fact that police had found Pastor Llewellyn Lucas’ “freshly-cut” head in the possession of the accused men.

“We are not asking for anything to be thrown out; we are simple asking the court to abide by the criminal procedure rules,” Panton explained. 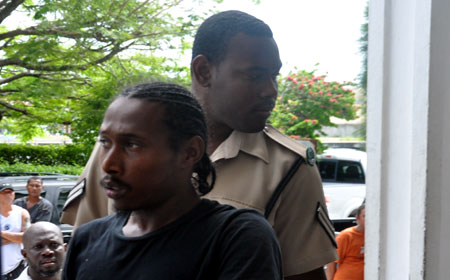 The police prosecutor who handled the arraignment this morning was Assistant Commissioner of Police Chester Williams, a trained attorney.

After Panton had engaged the court with his objection to having the charges read to his clients, Williams methodically stressed that the evidence that the police have so far amounts to prima facie evidence against the accused men.

Williams also pointed out to the court that police have taken samples, believed to be charred humans remains, from William Mason’s farm in La Democracia near Mile 31 on the George Price Highway.

William Mason, a Guyanese national who is the prime suspect in the kidnapping and murder of Pastor Lucas, was found with Lucas’ head in a bucket inside his pickup truck when police searched it Friday in Belmopan.

ACP Williams described how Sergeant Soloman Westby saw the men arriving in a Ford F-150 pickup truck and realizing that Mason was wanted for questioning by police, decided to call for police backup before approaching him.

A corporal and two other police officers came on the scene and conducted a search on Mason, during which a licensed .9mm handgun was found.

When the search began, ACP Williams told the court, Mason began acting in a suspicious manner and police eventually had to break into the vehicle from the driver’s side, which led to the discovery of one pump action 12-gauge shotgun and Pastor Lucas’ head in a bucket.

“If the counsel for the defense thinks that there is not sufficient evidence, that cherry is not to be h 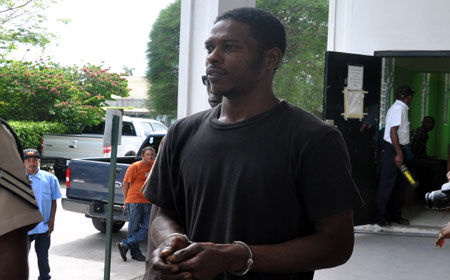 ad here. That cherry is to be had at the Supreme Court,” ACP Williams told the court. 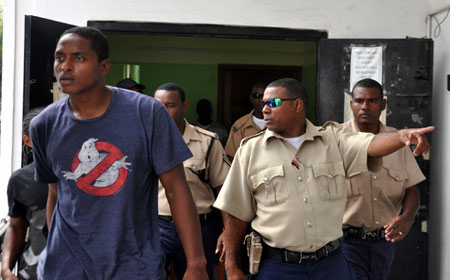 The Chief Magistrate said that the fact sheet that was provided yesterday (Monday) was woefully lacking, and added, “I do agree with Ms. John. We will proceed to arraign.”

The charges for the kidnapping and conspiracy to commit kidnapping, since those occurred at Mason’s Belmopan house, will be dealt with in the Belmopan Magistrate’s Court, and the murder and conspiracy to commit murder charges will be dealt with in Belize (City Court), because the offenses occurred in the Belize judicial district.

The accused were remanded to prison until September 14.

The court agreed on a case management date, which was set for October 6, and a disclosure date that was set for September 6.