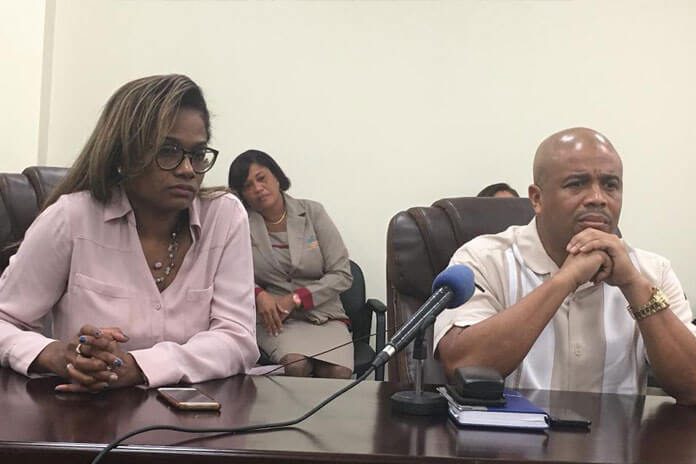 BELIZE CITY, Thurs. Jan. 30, 2020– The relations between City Hall and the media have been strained for several months, after media representatives decided to quit a WhatsApp group that the Council PR Department had set up so that there could be easy communication between the media and City Hall.

Belize City Mayor, Bernard Wagner, reached out to the media with a breakfast meeting, following which there were frank discussions between City Hall and the media. During the three- hour-long discussion, a number of topics were discussed and Mayor Wagner answered questions from reporters about various undertakings of his City Council.

The breakfast meeting got underway with remarks from Mayor Wagner, who said that he appreciated the presence of the media, who do an important job in keeping politicians in check. Remarks were also made by the City Council’s Senior Public Relations Officer, Erin Garnett, who also introduced the public relations team at City Hall.

Garnett said that in moving forward they would want the relationship with the media to reflect their mission statement to serve the people with efficiency, transparency and enthusiasm. “I think you will all agree that we would want a relationship that reflects that,” she said.

In keeping with the council’s aim of transparency and accountability, Mayor Wagner invited the media to the work station of Ryan White, who monitors a bank of cameras that keep an eye on the traffic flowing past the traffic lights at Central American Boulevard. There is also a bank of 54 cameras that is set up around the City Hall building. The council also keeps track of its fleet of vehicles through video cameras that are hooked up to tracking devices. The tracking devices are able to pinpoint the exact location of all of the council’s fleet of vehicles. Mayor Wagner remarked that unlike the previous City Council, which didn’t build up its assets, his council has been investing in assets for the city, which they account for.

Following the demonstration of the council’s tracking system, everyone moved into the council’s conference room, where a frank discussion was held about the relationship between the City Council and the media.

Channel 7’s Jules Vasquez told the council that it is the media’s job to hold them accountable. Marisol Amaya from KREM News stressed that after media members exited the WhatsApp chat group, there was only one interview with City Hall.

Mayor Wagner, speaking in defense of his PR team, said that he acknowledges that the PR team could work on having better timing. He said he takes a hands-on attitude in managing the affairs of the city, and the City Council now has a PR team which understands the importance of communicating.

“I promise to be more accessible. My PR team is behind me now, and they will bring everything on the table. I have no issue with the media; we came in on the backs of the media. I promise that from now on I will be more accessible to you all. We are answerable to the people,” Mayor Wagner said.

After taking care of the necessary house-cleaning issues, the meeting went into a question and answer session.

The first question the media asked was about the status of the municipal bond. Mayor Wagner explained that the municipal bond was in its final stage, and that they had exceeded the amount that they had expected for the bond. He said the City Council had floated a bond for $6 million, but the bond is oversubscribed and now stands at $8 million.
Mayor Wagner said that the City Council had to get an audit done, and this audit was done by Cedric Flowers, CPA. “The finding of this audit is interesting,” the Mayor said.

Mayor Wagner said that the first bond had deprived the City Council of its subvention from Central Government until the year 2023.

Under the watch of Mayor Darrell Bradley, the City Council had floated a bond of $40 million in 2012. Mayor Wagner said the council at that time should have used the secondary market for its bond. “No thought was put into that bond,” Mayor Wagner pointed out.

The Mayor said that in all of the City Council’s line items, taxes and so on, they are doing exceptionally well. He said that the previous council had a deficit of over $800,000, and his council has more social programs and is operating with a surplus.

Councilor Candice Pitts said that the management of our resources is only as good as the managers of those resources.

Councilor Allan Pollard explained that when it comes to the programs at City Hall, they give and take, and that they appreciate the Mayor’s fiscal management style.

Mayor Wagner said that because they don’t have the luxury of “running and knocking on big brother’s door” (Central Government), they have to exercise fiscal prudence and stick to the programs that are in their strategic plan.

Mayor Wagner informed that additional traffic lights will come on stream in the near future. “The traffic lights are in partnership with the Embassy of Taiwan,” Mayor Wagner said. In addition to the traffic lights, the City Council has been inviting tenders for the repairs and resurfacing of a number of the city’s streets. Councilor Albert Vaughan was asked about the status of the Council’s tar truck, and he explained that they still have the truck, but they don’t have a spreader. He said they have to rent that piece of equipment whenever the need arises.

The question of the state of the Belize City Swing Bridge also came up, and Mayor Wagner said that he will knock on every door out there to find funding for the repair of the bridge.
Mayor Wagner said that the council has full intentions of living up to the promises that were made in their manifesto.

He informed the media that the court order payment for the former City Administrator, Candice Miller, is up to date.