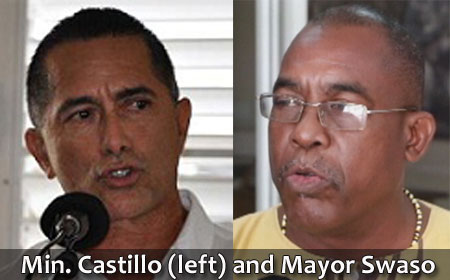 DANGRIGA–After having been delayed for a lengthy period on account of a major setback that was reportedly the result of a sizeable chunk of its funding having been allegedly siphoned off by former employees of the Social Investment Fund (SIF), the government entity that was in charge of the project, the long awaited renovation of the Dangriga market has finally been completed and yesterday, amongst political fireworks, it was handed over to the Dangriga Town Council.

The market project had been launched in May of 2012 and was slated to be completed a little over a year later; however, in September of 2013, it was struck with controversy which resulted in a change of contractor, termination of at least four SIF officials, including the executive director, and reallocation of financing in order for the market to be completed.

All that, coupled with the fact that the market was delivered 15 months past its scheduled completion date and $400,000 over its proposed budget, apparently caused Dangriga Mayor, Gilbert Swazo, to lash out at SIF and Government officials during the opening ceremony yesterday in the “Culture Capital”, Dangriga.

Swazo said, “We handed over our market to SIF and the Government of Belize [GOB] in May of 2012, and we were expecting that it be handed over back to us in July of 2013. Nearing the expected end of July 2013, we noticed that the market was less than about 30% completed and we said SIF had failed us. Ladies and gentlemen, July 2013 came and passed. With all the troubles, no apology. Our council, like the rest of the world, learned that the contract for the then contractor Mr. Kennard Smart was terminated. We now know the story very well, don’t we? Corruption. Corruption caused the contract to be terminated. SIF, whose mission is well-articulated, had failed in Dangriga. In April, the people of Dangriga were dealt another serious and devastating blow. This overt frontal assault took the form of a reallocation of funds. The funds of a minimum of about $400,000 were reallocated. $400,000 was taken from our Phase Two project to rehabilitate our streets. We have been made poorer as a result of 30 months of waiting. Mr. Government of Belize, you may expect forgiveness; however, your actions towards the people of Dangriga speaks volumes. You have not uttered a word of apology, so your silence to us is also communicating a message.”

Swazo further commented to his audience, “Our Honorable Prime Minister refused to meet with your Mayor. SIF, the Minister of Economic Development and Finance, no one on behalf of SIF or on behalf of the Government of Belize had found it prudent, or have the empathy, to apologize to the people of Dangriga, for all the pain, the suffering, the disrespect, and economic loss. I also firmly believe that our people, our Dangrigans, will remember the truth of what happened here. They will remember the pain. Our people will remember the suffering that you have caused them”.

One of the people to whom the Mayor’s comments were directed was Minister of State in the Ministry of Finance, Hon. Santiago Castillo, Jr., under whose portfolio the Social Investment Fund lies.

Castillo, who stepped up to the podium after Swazo had vented indefatigably at GOB and SIF for their misdeeds, replied by saying that Swazo never asked to meet with him.

“I will say that the Honorable Mayor never did ask to meet with me at any time, and I am the Minister under which SIF falls, not the Prime Minister. So let me take this opportunity to offer my profound apology to the people of Dangriga, for the inconvenience caused by the unfortunate delay in the completion of the market due to problems with the original contractor. I respectfully thank you for your patience; however, man, in construction, I’ve been in business for so long that I’ve had contractors that tell me a building is done for two million, and it ends up at two and a half million. And indeed, one contractor could tell you he could build this for half a million and the next one would take $800,000 to build it”, Castillo mentioned.

“Do we have a perfect system at SIF? No. Are we working to devise a better system? You bet we are,” said Castillo.

In an interview with the media after the ceremony, SIF’s Project Supervisor, Ernest Raymond, Sr., refuted the Mayor’s claims that the organization, which acts as a poverty alleviation program, has instead contributed to the impoverishment of his townspeople. (Swazo based these claims on the assertion that market vendors had been losing 25% of their revenue because of delays, while the town council’s revenue collections were falling by 30% as a result, after $62,300 in contributions were paid by the council to assist in completing the market.)

“That is not the case. It is not a situation where $400,000 was removed from one project to complete another project. We operate on the basis of an allocation for each town council and there is an overall budget for the project … It’s how he feels. It’s free speech in this country, you know; you say how you feel. It is his feelings. I can’t tell him he is either wrong or right, but in the matter of facts, yes, I can correct information that is either factual or not factual, and if you want to raise any of them I can, [but] there are some things [in which] he is factually incorrect,” Raymond said.

At the end of the day, Mayor Swazo, who earlier this week had been threatening not to acknowledge the finished product, citing no signs of value for money, accepted the refurbished market and signed the handing-over documents, but on the condition that certain irregularities in construction be addressed in black and white. According to SIF, a 12-month Defects Liability Period will follow the opening of the market, and the contractor must fix any defects that emerge within this period.

The market will be opened for business on November 1, and the Dangriga Town Council stated that the rental fee will not change; however, we understand that the 22 vendors will have to pay a trade license fee of $300 per year.