Media denied use of electronic devices at US Embassy roundtable 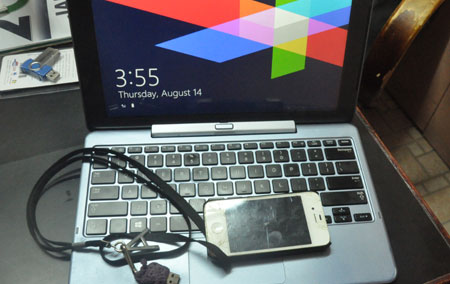 BELMOPAN—Last Tuesday, August 5, our newspaper received an invitation from the US Embassy in Belmopan to a media roundtable convened by US Ambassador to Belize, H.E. Carlos Moreno. In that e-mail, we were advised that only questions and topics submitted by the Wednesday, August 7 deadline would be entertained—a position to which our newspaper took strong objection, given the fluid nature of the news industry.

We take even stronger objection, though, to the surprise the media got this morning when we were told at the US Embassy that we could not take any of our electronic devices into the meeting room, “for security purposes.”

Today, we were like fishermen who went to sea and came back with our lines and bait—but no fish

Having electronic tools at our fingertips is tantamount to efficiency in 2014, especially for our newspaper, for which Thursday is a deadline day. Channel 5’s cameraman had to be turned back at the Embassy, and Plus TV’s reporter/cameraman had to stash his video equipment in the trunk of a media colleague’s car. I was told that not even my flash drive would be allowed behind the security checkpoint.

All this took most of us by surprise, and our newspaper had only received one correspondence from the Embassy asking us to pre-submit questions and topics, but absolutely no indication of any restrictions on the use of our electronic reporting devices.

In fact, a media colleague had received an e-mail from the Embassy stating, “This event is a reporting event for reporters/journalist. No videoing will be allowed, however, you can do voice recording. Sorry for any inconvenience caused.” [Emphasis ours.]

Another colleague told us this morning that she had likewise been advised that while no video recording would be allowed, audio recordings would.

Strangely, another Embassy rep insisted this morning when we showed up for the roundtable that the media had been notified of the blanket restrictions that absolutely no electronic devices would be allowed, but perhaps the information “had not gotten around.” For sure, it was never transmitted to us until we arrived at the Embassy for the roundtable.

The Embassy refused to bend the rules, but assured us that we would be provided within an hour of the meeting’s conclusion with a mobile version of the video, and as soon as possible later in the day with higher-quality video. We were also told that their photos would be e-mailed to us, since (not having our cameras) we could not take any for ourselves.

As a token of appreciation for us being the only ones to meet the deadline for submitting questions, we were afforded a seat close to the Ambassador at this morning’s roundtable, which began 35 minutes after its scheduled time of 10:00 a.m. The Ambassador apologized for the late start, made introductory remarks and gave us the first chance to ask questions.

The meeting concluded around noon, and at the time of this report (3:37 p.m.) we had received nothing from the Embassy. A colleague from a television station expressed frustration over the situation. Whereas as a newspaper journalist I can work from my handwritten notes to create a story, television news broadcasts require meaningful imagery, and two hours before their deadline, they have none.

This morning, the Ambassador was kind enough to pledge regular meetings with the media, but we sincerely hope that we will have no more meetings or briefings under such restrictive circumstances.

The Ambassador spoke of the value of a free press in a healthy democracy. A free press should be allowed to do its proper work, unimpeded, with its required tools in hand. Today, we were like fishermen who went to sea and came back with our lines and bait but no fish.

We were told that we would be allowed only pen and notepad for recording – this in 2014, when ICT and mobile devices rule the day!

I usually type what I can on the spot, because it saves me time and allows me to turn in my stories more quickly. I felt today that I was forced back in time by at least a decade, when mobile devices were merely a figment of someone’s wild imagination.

(After we wrote this report, the Embassy informed us that the video of today’s roundtable won’t be ready until tomorrow.)