The mesmerizing tale of how Belize got its name 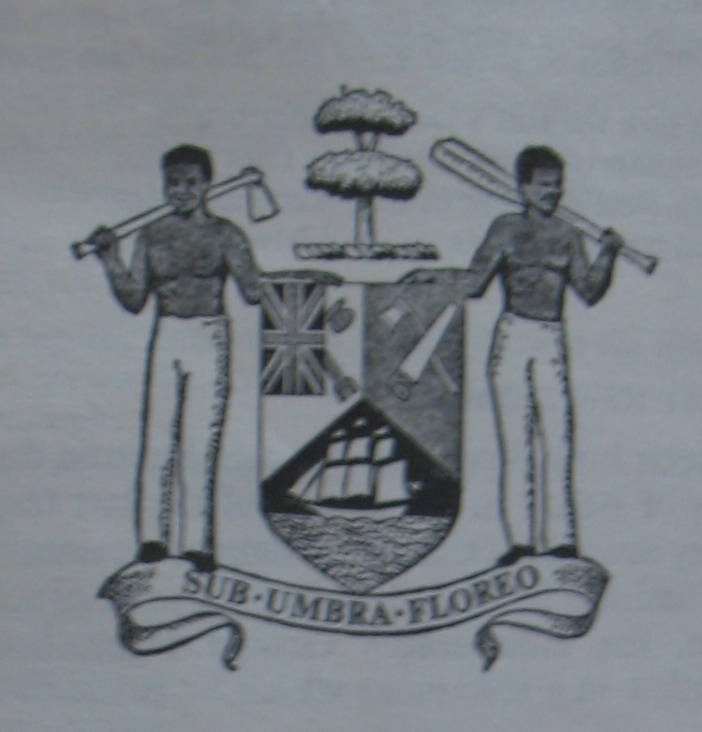 With numerous discussions circulating about the Battle of St. George’s Caye and our first settlers, as a Belizean, have you ever wondered how the country got its name “Belize”?  Many Belizeans are aware that the country was formerly known as British Honduras, then in 1973 its name was officially changed to Belize. The name of our country “Belize”, as many tourists have noted, is very exotic and unique and over the years has generated various “origin” stories.  The origin of the name is unclear; however, as you will clearly see in the facts stated below, there exist two popularly espoused possibilities of the etymology of the name Belize.

The first, one of the more logical origin stories, was probably derived from the earliest records of the settlement found in a journal dated back to 1677 belonging to a Dominican priest named Fray Jose Delgado, as noted in Alan Twigg’s book, Understanding Belize: A Historical Guide.   Since the Mayans were the first settlers of the country, it is believed that the name was provided by the priest’s translator and originated from the Mayan word “Balix,” which means “muddy waters,” referring to the Belize River, or from another derivation of the Mayan word “Belikin,” meaning “land facing the sea,” referring to the coast — both of which were names of popular settlements of the ancient Mayas.

Another possibility, noted in the Encyclopedia Britannica, is that the name was assigned by the Scottish buccaneer Captain Peter Wallace, who was credited in the 1827 Almanack with discovering the mouth of the Belize River. He used the river as a place of retreat and began a settlement around Belize River ca. 1638.  The story goes that Wallace, or his followers, gave his own name to Belize, but since the Spaniards could not pronounce “w,” it was substituted with a “v,” creating “Vallis,” which was changed to “b,” thus resulting in “Balise”.

The timeline of the origin of the name was also noted on the below image, which was shared by Belize Archives & Records Service (BARS) on Facebook on July 19, 2011. According to BARS this image was scanned from a framed document donated by Stephen Fairweather from a book; however, the name of the book, its author and the creator of the image are unknown.    Photocopied records from Spanish archives refer to the settlement as Wallix (1796-1798), while Belize’s records state the name of the settlement as Bay of Honduras or British Honduras and possibly Belize. Other maps and correspondence during this time had a complicated range of different names stated on the documents.

Upon analyzing the image, it can noted that the recorded dates in the document are not in order and contradict the creator’s timeline for the deterioration of the name.   Interestingly enough, you can clearly see a scanned copy of the portion of the journal belonging to the priest Delgado on the fifth image from the top.   But, if one should rearrange the image and reference the names in the proper chronological order, it will result as follows:

Bullys: 1705 — Extracted from John Fingas’ letter to the Council of Trade

Valis: 1724 — Report in Madrid of the number of English settlers 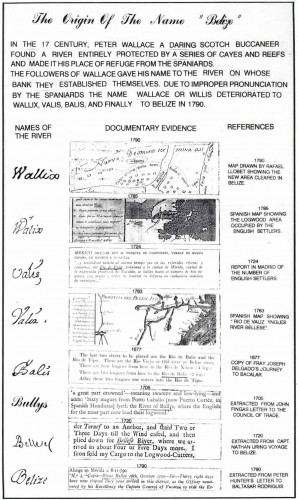 Therefore, in the correct chronological order, one can clearly see that although not in the proper order, the creator of the image is somewhat accurate in his determination that the name was derived from Balis (Mayan) and Walis (Wallance).

It is fascinating to see how many origin stories exist for Belize, The Jewel of the Caribbean. Whichever the case of the Belize etymology, Belizeans should be proud of our long heritage of settlers, ranging from the Maya and British buccaneers in the past to the current presence of various ethnic groups from all over the world, who are spread throughout the country.  By peeping into our past, we can truly appreciate our present.