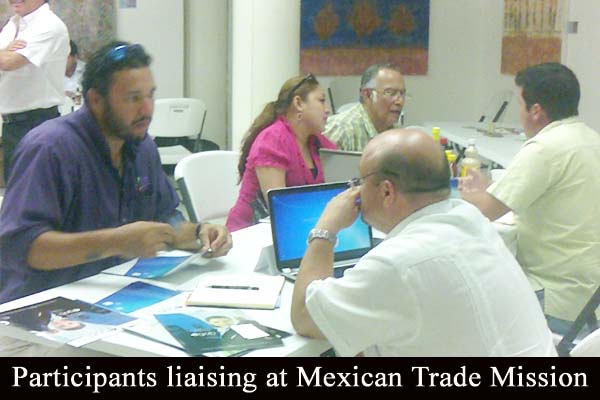 Apart from strengthening Mexican and Belizean trade relations, the objective of the session was to identify potential buyers and suppliers of a variety of products and/or services, as well as to facilitate possible investment opportunities for both countries.

Amandala was on hand for the event, and we spoke to Javier Aguilar, the Head of Trade, Investment and Tourism Affairs at the Mexican Embassy to Belize, who told us that a total of 8 companies, mainly from the Mexican cities of Yucatan and Quintana Roo, have come to offer their wide array of products and services to Belizean companies, and likewise, there are opportunities for Belizean companies to provide certain products and services to the Mexican market.

He said, “The companies that came from Mexico are related to the food industry, such as HPS Deli, Lanita, and Distributadora Azucar. We also have other software companies like Systemas en Punta and Blue Ocean Technologies, as well as Maderas Mac which specializes in high retardant curing processes for lumber, and another company which sells industrial products and chemicals. They are all speaking with interpreters from Belize to find opportunities either to offer or buy products or services in both Belize and Mexico.”

Aguilar emphasized that Belize is considered as an important ally and neighbor to Mexico, and since the Mexican companies from Yucatan and Quintana Roo are “right next to Belize”, he believes that the trade mission could also foster bi-national integration through establishing links between entrepreneurs from Belize and Mexico so as to promote regional development.

ProMexico is an agency of the Mexican Government that is based in Merida, and is the equivalent entity to BELTRAIDE in Belize. Its director, Jose Manuel Rodriguez, told us that the goal of the meeting is to promote exports, attract foreign investment, and assist Mexican companies that wish to establish relationships abroad.

He stated, “We brought in 8 companies in what is called a commercial mission in order to create trade opportunities and present their products to Belizean establishments, but they are also open to hear about products that can be exported to Mexico. Four of these companies are from the state of Yucatan, three are from Quinatana Roo, and one from Mexico City. The products they are presenting are mainly processed fruit which include fruit juice concentrates, vanilla, jam concentrates, vinegar, chili pepper sauces, ketchup, achiote marinade as well as white powdered sugar and sausages.

“One company makes wines and spirits for cocktails, as well as chemicals for cleaning like muriatic acid, environmental sanitizers, chemical products for water treatment, industrial solvents, stainless steel polish and drain cleaners, and non-chlorinated degreasers. One of the companies also provides Global Positioning Systems (GPS) and Customer Relationship Management (CRM) software administration solutions, which can be used by Government to determine how much income they receive, and how to manage spending and human resources.

“Another company provides chemicals to protect the timber and retard flames in wood so that it won’t be easily burned by fire, and they are also interested in exporting timber from Belize to Mexico.”

Rodriguez mentioned that this is the beginning of a relationship through which the two countries can partner for business purposes while sharing and adapting technological concepts, such as modern road construction.

He said that talks between some of the companies are scheduled to continue after today’s session with the hope that in a short time, more companies within Belize and Mexico will be doing business together.

“We believe that there is more work to be done regarding these joint ventures because the region is slowly being integrated and these efforts help to bring us in that direction”, Rodriguez asserted.