M/Health shuts down Estrella’s Pharmacy and Clinic in Independence 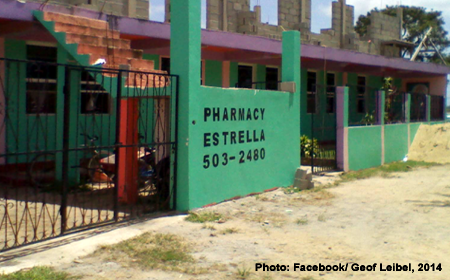 INDEPENDENCE, Stann Creek District, Mon. May 8, 2017–Health authorities have moved to shut down a private pharmacy and clinic which was allegedly being operated by an unlicensed nurse after an official investigation found that a medication mix-up could have contributed to the death of Ricardo Quintero, a 5-month-old baby of San Pablo, a farming community in Toledo.

The boy died en route to the Independence Polyclinic while his parents were trying to seek emergency medical care for him. By the time they arrived at the public clinic, the baby was already dead. A post-mortem conducted by Dr. Loyden Ken in Ladyville marked the time of death as 7:04 a.m. on Saturday, March 4, although the case only recently became public.

The cause of death was said to be acute respiratory failure. The exam also found that the baby had suffered bronchial pulmonary aspiration of gastric contents, possibly from the inhalation of vomit.

Administrator at the clinic, Ms. Eugenie Gabourel, told our newspaper that the public clinic had “absolutely nothing to do with the baby’s death.” She said that whenever any child under the age of 5 dies, an investigation is launched to determine what led to the baby’s death.

In this case, the parents reported that they had gone to a private clinic in Independence, Stann Creek, where they were given medication for the baby. The baby reportedly had diarrhea and vomiting, and appeared to have also suffered dehydration.

Following an investigation by health authorities, the medications held for sale at the pharmacy were confiscated near the end of April, and a verbal warning was given for the medical facility to cease operations. The fairly new private facility is Estrella Pharmacy, Clinic and Hotel.

The Department of Health Services said that their investigations revealed that it was a foreign nurse, the wife of a doctor, who had prescribed medication for the baby. There was no pharmacist at the clinic, he told us.

As for the doctor in question, Jose Rodrigo Estrella, he told our newspaper that he exited the enterprise three years ago, but it continued to be run by his estranged wife, Maria, a national of Honduras. According to Estrella, she studied in Chetumal, her hometown, and had also passed her nursing exam here in Belize, but he could not explain to us why she did not have a license to operate. Our attempt to reach Maria via the listed phone number proved futile, and an automatic message said that the number is “not in service.”

According to Director of Health Services, Dr. Marvin Manzanero, the clinic was last issued a one-year license to operate in June 2016, but since there was no licensed nurse or pharmacist, and no doctor at the clinic, they were not to be offering medical services to the public.

Manzanero said that nurses get their licenses from the Nursing Council; pharmacists from the pharmacists’ board; and doctors from the Medical Council.

In this case, the doctor who had been operating at the clinic, Dr. Estrella, told the Ministry of Health that he doesn’t conduct clinics there anymore. Estrella is the main doctor operating out of the Independence Poly Clinic, and he is the contracted provider under the National Health Insurance (NHI) Scheme. The administrator of the Independence Poly Clinic confirmed that Dr. Estrella has been working at the public clinic full-time.

Dr. Estrella told us that he migrated to Belize 38 years ago, in 1979. He has been working with the clinic for 18 years and is now based in Bella Vista, he said.

According to DHS Manzanero, there are 120 pharmacies operating countrywide, based on their last count. He said that there are checks made by the Ministry of Health and if they find anything amiss, the facility is given time, usually 6 weeks, to take specified corrective action.

He said that the investigation into the baby’s death ran parallel to an investigation which had been launched by the drug inspectorate team which unearthed problems with the labeling of drugs at Estrella’s Pharmacy.

In the case of Quintero’s death, there are no toxicology assessments to establish which drugs were actually in the baby’s system when he turned fatally ill.