Home Highlights Ministry of Finance Meets with the BCCI
Highlights

Ministry of Finance Meets with the BCCI 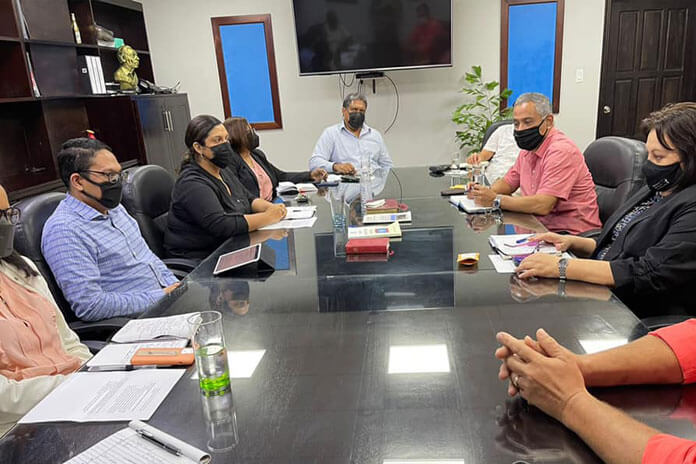 BELIZE CITY, Wed. Nov. 24, 2021 — Last Wednesday the Prime Minister invited members of the Belize Chamber of Commerce and Industry (BCCI) to his office at the Charter House, where he had a discussion with them about several changes to affect the business sector in the near future. The Minister of State in the Ministry of Finance, Economic Development and Investment, Hon. Christopher Coye, and the Chief Executive Officer of that Ministry, Narda Garcia, were also a part of the discussions.

According to an update shared on the Government of Belize Press Office website, the meeting centered on the impending reopening of Belize’s land borders, which have been closed since the onset of the pandemic back in the first quarter of 2020. According to that update on the website, “The Prime Minister informed the council that Cabinet, after much discussion and considering several important factors, had decided that the land borders would be opened in early 2022. The details of the reopening are to be further discussed in Cabinet and protocols would be announced to the public as soon as these are finalized”. The Prime Minister has reportedly committed to considering the recommendations made by the BCCI regarding the reopening, and also plans to present these recommendations to Cabinet for further review.

During the meeting, the BCCI and the GOB also engaged in discussions regarding the country’s ongoing response to COVID-19. As reported, the Prime Minister has gone on record to say that the Ministry of Health and Wellness (MOHW) has been doing its best to contain the spread of the virus and promote the vaccination campaign; however, the most recent vaccination report shows that as of November 26, 2021, only 193,934 Belizeans were fully vaccinated. The most recent Covid-19 report indicates that a total of 30,165 Covid-19 cases have been documented in the country, with a total of 570 deaths and a mortality rate of 1.89%.

Additionally, during their meeting, members of the BCCI and the Ministry of Finance also discussed the numerous ongoing reforms being introduced by the government and plans to introduce other reforms that are intended to “improve the business environment”.

At the conclusion of the meeting, it was agreed that consultations between both parties would continue into the coming year.