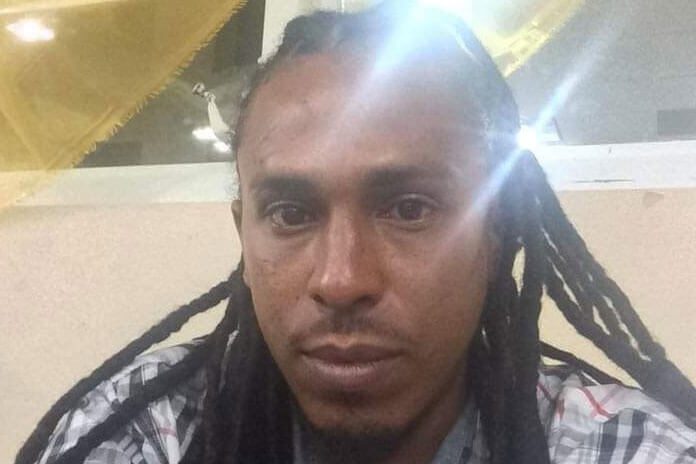 BELIZE CITY, Mon. Dec. 16, 2019– Densmore Bowman’s family has been in turmoil ever since the 34-year-old Belmopan resident went missing on November 30. Bowman’s family went on an all-out investigation comparable to what’s conducted by the Belize Police Department in their search for him.

This morning, their determination to find him and bring closure to the saddest chapter of their lives paid off when his cell phone and slippers were found between Miles 25 and 26 on the George Price Highway.

Bowman’s body was found about 100 yards into the bushes off the highway. Family members had recovered several of his personal items from the area prior to this morning’s discovery of his chopped up, badly decomposed body.

Mary Coleman was scheduled to return to her home in Arizona, United States today, but she had to make one last, final push to locate her missing son. This morning, Coleman began walking on the George Price Highway in search of something, anything that could help her find Bowman.

The family had been combing the general area along the George Price Highway where messages to them had indicated that his body may have been dumped.

Coleman told Amandala, “I am happy that I found him, and that will bring closure to me and my family. I was supposed to leave at 5:30 this evening.”

Coleman said that she prayed to God to help her find her son before she left. “I am a God-fearing person and God has been good to me,” Coleman said, obviously fighting her emotions to avoid breaking down in tears.

“I know if I go without finding him, I would be a total wreck after I get home,” Coleman offered, “God answered my prayers and I am so grateful.”

Coleman went on to relate, “I was just walking along the road to where the smell is, and when I looked, I saw the phone and the slippers.”

We asked Coleman to speak to us about the friends with whom her son was last seen.

Coleman added, “I don’t have hatred for them. All I beg them to do is to make peace with God.”

“Do you think that the police will make an arrest for your son’s murder?” we asked.

“Most likely; I don’t know about the police. I pray that they do something so that those guys don’t hurt another family,” Coleman replied.

Coleman said that her son lived for his family and his five children.

“He was a very loving person; his family meant everything to him,” she said.

Bowman was last seen on a video with his friends at Lucky’s Store in Roaring Creek. We asked Tiffany Cadle, a sister of Densmore Bowman, how she got to know that her brother’s body was at the location where it was found.

“My brother went missing on 30th November, and he had a cell phone and we were able to track his cell phone. When we tracked the phone, it said Mile 23, in this area, and we started looking for him since then. We thought that if they wanted to get rid of his body, we figured the garbage dump. We didn’t come down this way. We got a tip from someone who told us to go to Mile 23. ‘Don’t give up, your brother’s body is out there.’ We don’t know who the person is, but we were told to go across from the Chinese village at Mile 23,” she said.

Cadle told us that they went to the area several times and found his belongings near the garbage transfer station.

“We found his social security card, his bank card, and some of his clothing, so we knew we were onto the right location,” Cadle said.

“But we kept getting different locations by the ones who are involved, who were also helping us to look for this body,” Cadle added, “I woke up Saturday morning around 3, and I prayed again, asking God to please help me find my brother. And the person messaged me again and gave me the information.”

Cadle went on to explain that their family did a lot of investigation and were able to trace every single step of her brother since he went missing. “We have the video of the persons he was last seen with,” Cadle said.

The family was out in full force in the area this morning, and Cadle said she got a call from her mother, who had picked up her brother’s cell phone and a pair of slippers he was wearing when he left home.

“We passed all the information to the police, asking them to pick up these people, but they did nothing,” Cadle said.

We asked Cadle what she thinks happened with her brother and the persons with whom he was last seen.

“I think they injured him in the car, it was a Nissan Altima car, and they were trying to get him to the garbage dump. When they hit this curve, my brother managed to get out of the vehicle and run, and then he fell, and when he fell, that’s when they chopped him up. I know that he didn’t go down like that. That’s not in him.