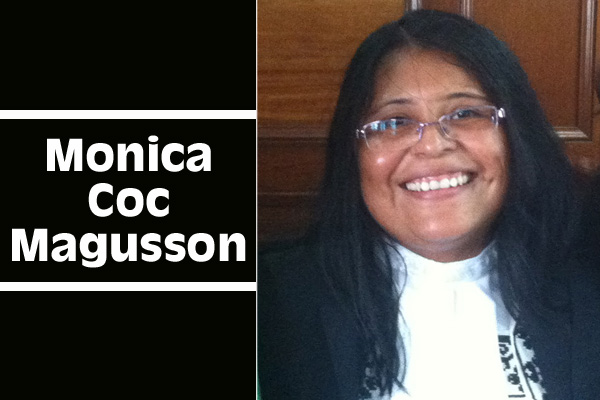 The Maya of Toledo will have their first indigenous lawyer serving in Belize. She is Monica Coc Magnusson, 34, sister of Cristina Coc, who is a lead activist in the Maya land rights movement – a movement in which Magnusson herself has been quietly involved for several years, having done much of the legal leg work even while training at a US law school.

Coc Magnusson was today called to the Bar of Belize after Chief Justice Kenneth Benjamin accepted a motion filed on her behalf by Senior Counsel Antoinette Moore, who handed over to Coc Magnusson her black robe that is over 20 years old, perhaps symbolic of the role that the newcomer will now play as a part of the legal defense team for the Toledo Maya – a role which Moore has led since the first Maya land rights case in 2007, when Chief Justice Conteh ruled favorably in the first Maya land rights case filed for Conejo and Santa Cruz.

Moore told the court that Magnusson is the first indigenous Maya from Toledo to have completed law school, to obtain a legal education certificate and to now be called to the Bar of Belize.

At the time of the first Maya land rights case, Monica Magnusson was an intern at the Indiana University School of Law in Indianapolis, from which she attained her JD – Doctors of Jurisprudence. On April 25, 2014, she completed the requisite program at Norman Manley Law School at the University of the West Indies to attain her certificate of legal education, which qualifies her to now practice in Belize. 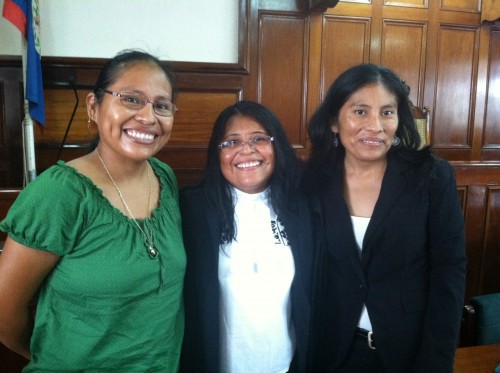 Monica with her sisters, Cristina and Martha

In court this morning, Senior Counsel Moore told CJ Benjamin that Magnusson had met all the requirements, including having lodged her certificate of good conduct and receipts, showing that she is a legal practitioner. Two affidavits from practicing lawyers in Belize were also presented. Those affidavits were sworn by Lisa Shoman, SC, and Audrey Matura-Shepherd, who both indicated that they are acquainted with Magnusson and that to their knowledge, she is a person of honesty, integrity and good conduct.

Moore also gave her own attestation to the court, noting that she had known Magnusson for at least the last 10 years, and that while Magnusson has been residing in the US, she frequently returns home to Belize and whenever she is home, she is always actively engaged in her community in rural Toledo, where she has worked in various capacities on the Maya land rights case.

“This is how I came to know her. Even while in law school and practicing law in the US, she remained committed to Belize,” said Moore.

She added that Magnusson had helped voluntarily with research and also traveled from village to village interviewing claimants and helping to draft affidavits for court, all on a pro bono basis. Moore described Magnusson as “meticulous.”

“With this distinction, she has a heavy responsibility to shoulder, but she can handle it. She will set a fine example for those who come after her,” Moore said.

In deliberating on the motion, Chief Justice Benjamin noted that Magnusson had met the revenue and academic requirements, and that she had satisfied the eligibility and suitability requirements, with her application having been supported by Shoman, Matura-Shepherd and Moore.

Benjamin said that although Magnusson had been admitted to the bar elsewhere, she “must be especially proud to serve her native country.”

He added, though, that, Magnusson should “always remember” that if she has an interest in a case, that she should hand over the case to another attorney; otherwise, her vision will be clouded on how the case should be presented, as she may get carried away by emotions, which makes it difficult to “see the forest from the trees.”

He also reminded the newly admitted attorney of the need to provide pro bono work from time to time, as a social service.

“I have heard it said that she is the first from [the] Toledo community admitted to practice in Belize. I think that is the source of great pride,” said Benjamin, in congratulating Magnusson.

He said that she is beginning a challenging process that will see other young aspirants on the same path.

“I have greatest confidence in your ability to make your contribution here in Belize – not only to the Bar but to the community in general,” Benjamin added.

After Benjamin accepted her motion to be admitted to the Bar, Magnusson thanked the court, as well as Senior Counsel Moore, her family and friends, who encouraged her through the process.

“I am honored to be a member of this institution and will do everything I can, to the best of my ability to uphold the Constitution and the Laws of Belize. I am grateful for this opportunity and moment in time, and I hope I can make my community proud,” Magnusson said.

After the court session, Magnusson told Amandala that she was inspired to pursue the legal profession while being on the sidelines of the land rights movement led by the late Maya activist, Julian Cho.

The 1997 graduate of Toledo Community College and subsequent graduate of St. John’s Junior College won a Jesuit scholarship which enabled her to begin her studies overseas, at Le Moyne College in upstate New York.

Magnusson, who is a mother of one child, 16 months old, told us that she and her husband, a native of Michigan whom she met while she was growing up in Toledo, Belize, intend to move back home to Toledo, where she intends to set up her law office.

More notable is Magnusson’s intention to appear for the Maya of Belize as they continue their court battle at the Caribbean Court of Justice.

In response to the CJ’s admonition against taking on cases in which she has an interest, Magnusson expressed the view that she could be balanced enough to take on such a case.

“Having an interest or being emotionally attached does not necessarily mean that you cannot be objective and I’ve been interested in the Maya land rights case, and I would be remiss to say that I don’t have emotional attachments, because it is something that directly impacts and affects the livelihood of my community. However, I don’t think that emotion necessarily clouds my judgment in that regard,” Magnusson told us.

She said that when she started law school, it was always her intention to come back to her roots.

“The more involved I became with the case down here, the more I felt that I needed to come back and it just felt like the right time,” Magnusson said.