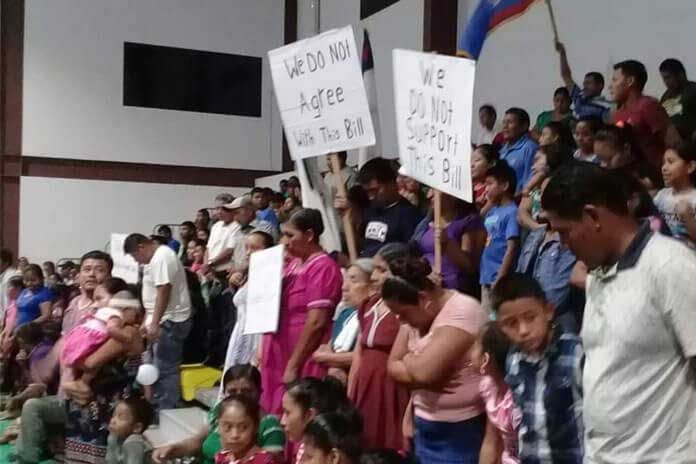 BELIZE CITY, Thurs. Feb. 6, 2020– While the community still has mixed emotions concerning the Equal Opportunities Bill, new entities are joining the band of those not in favor. Since January, the Anti-Discrimination Steering Committee, through the efforts of the Special Envoy of Women and Children, The National AIDS Commission and other partners, has made numerous attempts to build transparency and support for the bill.

These attempts include the countrywide public consultations which took place from January 11th-18th, a media breakfast with the Belize Council of Churches on January 21, a Q&A meeting with the Ministry of Education on January 30 and a series of informative posts on social media.

Despite these efforts, the National Evangelical Association remains firm in their outright rejection of the bill and have been petitioning to have it thrown out. There was widespread objection to the bill by the Belizeans of Toledo, and according to the president of the Southern Evangelical Association, Pastor Vic Hernandez, a letter was sent to the National AIDS Commission last Thursday, reiterating their lack of support for the bill.

The letter was accompanied by a petition with signatures from five thousand one hundred and thirty six (5,136) persons who are in favor of throwing out the bill.

On a telephone interview with News5, Mr. Hernandez clearly outlined the reasons that the Evangelical Association could not support the bill:

“One of them we looked at as, we believe that the freedom that we now enjoy and that our Constitution allows us to enjoy is in jeopardy. We also firmly believe as people of faith that this bill is designed to empower the LGBT community and to take away the freedom from our churches. Also this bill is dangerous because it forms a commission and a tribunal again to take away that freedom,” he said.

In the midst of this, the BNTU issued their own press release on Monday, February 3, stating their concerns about the “fast pace at which the presentations and consultations are being carried out.”

At a press conference that same day, BNTU president Elena Smith told the media more about the concerns of the unions:

“… we are calling for a slowdown of the way in which they are addressing the matter of that bill. And if the case we look at it as being going very quickly and persons don’t really have a chance for them to properly digest what the bill is, to understand it, it and make meaningful contributions. So we are requesting that that be slowed down,” she said.

The five thousand plus petition signatures were reportedly obtained from fifty five communities and over one hundred churches and were stamped by alcaldes of Toledo.