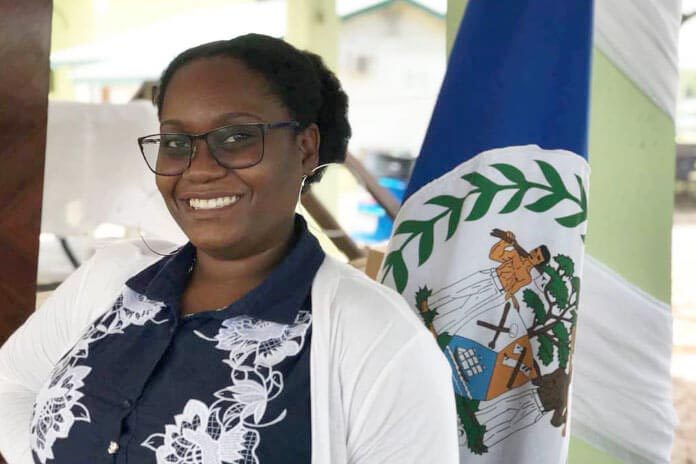 Recently, it was announced that a brilliant Belizean young woman, Abbie Godoy, was granted a Rhodes scholarship to attend Oxford University. She hopes to pursue an MPhil in Development Studies. Abbie is a fiery Belizean youth, a lady riot, whom I first met as an Informed Teen Reporter of the National Committee For Families and Children as she and her team reported on the World Youth Conference that happened in Belize some years ago.
I also know of two protests that Ms. Godoy has led — the first being successive climate change protests in front of the National Assembly building in Belmopan and the second, more recent protest being a walkout from classes at the University of Belize that was organized by her, along with other members of the student government of the University of Belize, when the administration of the university refused to cancel classes to facilitate students attending the “Only the People Can Save the People” national march and rally.

This young woman is indeed a beacon of light that represents hope for all of us in Belize and I wish her the absolute best in this endeavour. You have my support, always.

I wanted to highlight the words of another young Rhodes Scholar 2020 recipient, one from Bermuda, Mr. Ryan Perinchief. I met Ryan as a fellow national delegate at a Commonwealth Heads of Government meeting in London and we’ve been kindred spirits since. He is the founder and director of Bermuda Future Leaders Bermuda, whose mission statement says it all: “In all our activities, we encourage independent thought with a community-centred and social justice-minded approach that will enable students to gain a better understanding of themselves, disrupt the status quo, and take charge over their futures.”

I present to you his reflection on being awarded the Rhodes, Scholarship:

In light of the news regarding Bermuda’s 2020 Rhodes Scholar, I am forced to consider the legacy of Cecil Rhodes and whether it is reconcilable to accept an opportunity founded upon a legacy of genocide and colonialism. I post these thoughts not in direct response to any particular criticism (I have been overwhelmed with support), but to share my own internal reflections on the conflict which has been playing out in my own head long before the announcement.
——————————————
My first name: Ryan, Irish
My mother’s name: Robinson, English
My father’s name: Perinchief. Something to do with French, but we don’t really know because we can’t trace our ancestry beyond a free man from St. Kitts & Nevis
My nationality: British Overseas Territories Citizen. Holder of “Bermuda status”. Juan de Bermudez, Spanish

The black experience is an incredibly complex contradiction

When Cecil Rhodes established the Rhodes Trust, he did not envision that it would be taken up by people who look or think like me. Even today, the perceived “success” of many individuals seems to be almost directly proportionate to the extent by which they are willing to compromise and contradict their own identities.

No doubt, it is the same story everywhere.

Choosing Howard over Oxford would have offered little relief; For even such a historically black prestigious institution owes its name to an Oliver Otis Howard – a General who became famous for unspeakable acts against Native American men, women and children. My high school, Bermuda’s most historic, is named after an Anglo-Irish bishop whose philosophies were steeped in colonialism. “Westward the course of empire takes its way”, George Berkeley declared. His mission to create schools for colonists and Native Americans reeks of Manifest Destiny. I say this not to cast judgment on these institutions, but simply to illustrate that whether it be a Rhodes, Scholarship or a Bank of N.T. Butterfield one, an Oxford course or Howard, a job at Colonial or an insurance policy there, the difference is only a matter of degree, not of kind. They are all different branches of the same root.

——————————————
In the end, I won’t argue against anyone who says that attending the University of Oxford on a scholarship named after one of the most ruthless individuals in modern history is contradictory and problematic.

The nature of colonialism and imperialism is such that its legacy is inescapable and full of discrepancies. And every day, we are forced to make decisions about how best to navigate the world using the cards we’ve been dealt, without losing ourselves entirely. W.E.B Du Bois described this dilemma as “the double consciousness” – the internal conflict experienced by subordinated groups in an oppressive society.

In “A Fanonian Perspective on Double Consciousness”, T. Owens Moore writes: “In an attempt to be mentally healthy in this insane society, the oppressed or exploited can develop adaptive as well as maladaptive responses. An adaptive response might entail an accommodating mentality that vacillates between being a ‘Negro’ or an American. A maladaptive response could be to change your reality and to take on the characteristics of the oppressor. In the midst of these two diametric positions is mental conflict.

To ward off mental conflict, one must generate a fever of resistance.”

——————————————
And so, it is important for me to affirm openly, as many other Rhodes Scholars have also done, that in the end, this scholarship does not buy my silence. On the contrary, it was paid for in my ancestors’ blood. I pledge to continue to honour them, God, my community, and those who have supported me in making use of whatever tools and benefits may come from it.

Ultimately, I do not think this question will be reconciled in my lifetime. It has been debated by much greater black intellectuals, long before me. If we consider the policy of “survival pending revolution”, perhaps it is not right or wrong. It just is.

All I can ask is that I be judged not by what opportunities I am given, but how I use them instead.
——————————————
#themarathoncontinues
Thank you for being a part of this journey with me, and allowing me to share some of my innermost thoughts.
And thanks to the village, for your continued support.
‘Peace if possible, compromise our principles never, freedom by any means necessary.’
Additional reading:
“The Dilemma of the Black Intellectual”, Cornel West
“Black Skin, White Masks”, Frantz Fanon
“The Souls of Black Folk”, WEB Du Bois.
Stay Curious.