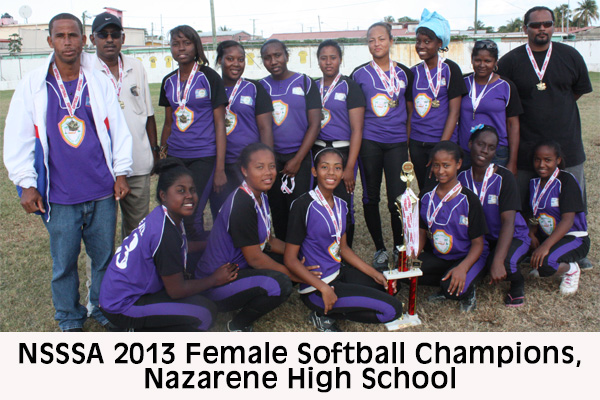 The National Secondary Schools Sports Association (NSSSA) held its high school softball Nationals on Friday and Saturday, March 15-16, at Rogers Stadium in Belize City, and it was pitchers Ashley Lucas of Nazarene girls and Konrad Gonzalez of San Pedro boys who stole the show with their outstanding performance, leading their teams to the national high school softball championship and securing MVP honors in the process. CODICADER Gold medalist Ashley Lucas was thoroughly dominant, and ably supported by her team, conceding only 2 runs total in the two games played. And young Konrad Gonzalez was a sensation with the female fans, as he struck out a tournament high 20 batters in two games played.

Next was the female championship game, and (F) Nazarene High, with their ace Ashley Lucas, was too much for Belize Rural High, beating them, 17-2; WP – Ashley Lucas, LP – Sabrina Campos. The male championship game turned into a real duel, with the score tied 3-3 going into the bottom of the 5th inning; but (M) San Pedro High pulled out the 4-3 win over Belmopan Comprehensive; WP – Konrad Gonzalez, LP – Kyle Thomas.

Hall of Famer Gretel Lashley handed out the medals and trophies to the winners after the games. Female MVP was Ashley Lucas of Nazarene High, and Male MVP was Konrad Gonzalez of San Pedro High. Top pitching performances in their two games pitched were: for the females – Ashley Lucas of Nazarene High (10 strikeouts); and for the males Konrad Gonzalez of San Pedro High (20 strikeouts) and Greg Almendarez of Independence High (14 strikeouts).