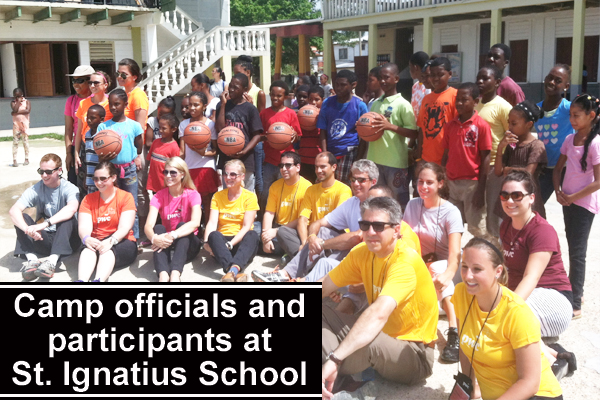 Belizean students participating in the Financial Literacy and Entrepreneurship camps, which are being held in Belize City for the past two weeks by the Ministry of Education and its U.S. partners: Peacework, a U.S. NGO, and PricewaterhouseCoopers LLP (PwC), a Delaware-based firm, were treated today to a gift of 60 official or regulation basketballs courtesy the National Basketball Association (NBA), made available under the initiative dubbed “NBA Cares”.

The NBA says that the initiative is “the league’s global community outreach initiative that addresses important social issues such as education, youth and family development, and health and wellness.”

We caught up with some of the camp officials and participants at St. Ignatius R.C. School in Belize City on Tuesday. Among them was Shannon Schuyler, PwC partner and corporate responsibility leader, who said that she has been to Belize 17 times since 2007 as a part of Project Belize. Schuyler told our newspaper that the NBA does a lot of their non-profit work using players (men and women) who talk with youth about financial literacy and what it means to save money and spend money.

“They currently travel a lot in the US to different programs that are exactly like the one in Belize, and in the future, we are thinking about what it might look like to get a couple of them down here to help us teach financial literacy and to help the students to get to know more of the NBA players,” Schuyler told Amandala.

Dr. Sheldon Samuels of the Ministry of Education, who has been working with Project Belize for the past four years, told our newspaper that he would love to see a particular NBA star come to Belize.

“It has always been a dream of mine to see …Kobe Bryant, or maybe another NBA player, come to Belize, to see Belize as a destination where they can come to help and mentor and to support children. I know they have NBA [Basketball] Without Borders. I think maybe one day Belize can be a part of that, where they can come and provide some kind of support for our children,” Samuels said.

Belizean photographer, Richard Holder, has been taking photos of the events, and some of those photos taken today will be shared with the NBA.

Sawdye said that while she does not know whether Belize is on the NBA’s agenda, she will “let them know that Belize is interested to have more than basketballs…” She noted that the NBA has two outreach initiatives: Basketball Without Borders and NBA Care.

The PwC’s CFO had high praises for the happy campers whom she has seen at the 6 schools participating in the camp this week.

“They’ve been totally engaging. I’m really enthusiastic about the financial literacy program. They’ve really been interacting a lot with our folks and it’s amazing the kind of bond they build in such a short amount of time with our people,” said Sawdye.

Sawdye said that the Belize initiative is part of PwC’s Earn Your Future Campaign, a $160 million program through the Clinton Global Initiative. Belize is the only country outside of the US where the PwC and its partners are conducting the program, she told us.

Dr. Samuels said that the overall goal of the program is for children to become better money managers. He said young people should start developing more of a business mentality: working for themselves, rather than believing that they have to work for someone else.

Two of the happy campers we had a chance to interview told us that they are looking forward to doing just that.

Anikah, a 3rd form student of Wesley College who is interested in cosmetology, said that this is her second year in the camp, and she has learned valuable information on how to save and budget, and how to form her own business.

Denzel Carr, a Std. 6 student of James Garbutt School, who said that this is his 4th year in the camp, is interested in having his own recreation business. He said that they have been learning how to handle their own money.

Carr said that he is not good at basketball, but he is good at football. He plays forward for his school team and wears no. 10. Needless to say, his recreational business model features his favorite sport.

While the camp has focused on Belize District schools, the organizers say that their hope is to eventually reach out to the districts.

She also told us that they will reach out to other corporate sponsors, in the hope they could connect them with Project Belize.