BELIZE CITY, Fri. Apr. 28, 2017–The 2017 NEBL playoffs are finally here, and the one thing we all know for sure is that there will be a new champion. Who it will be, of course, is anyone’s guess, but we will try to provide some insights into which of the four remaining teams we consider has the best chance to emerge as the 2017 NEBL Champion.

From roles to strategy to performance, the playoffs always supply change at every level, and this undoubtedly will be manifested tomorrow night in the #1 versus the #4 bracket. Since 2014, the Tiger Sharks, arguably, has been the closest thing to a modern day dynasty in the newly re-structured NEBL, so to speak. They boast a resume of having played in 3 consecutive finals, winning two championships, and come tomorrow night, will commence their quest to win a third such title. Standing between them and that championship, however, is their arch-rival from Cayo, the Western Ballaz, led by Darwin “Puppy” Leslie. Obviously, much intrigue is here and, numbers aside, this series runs deep in terms of personalities and relationships.

To give a brief background, it was not long ago that Leslie led this same Tiger Sharks team to back-to-back championships in 2014 and 2015. Since then, he has left the Tiger Sharks and, for good measure, stuck it to them last year, leading the Belize City Hurricanes to their first championship over these same Tiger Sharks. Tomorrow, he (Leslie) will be seeking an encore, looking to win, from a personal point of view, his fourth consecutive championship, amazingly with three different teams, this time at the age of 36. This is historical, and, to the best of our knowledge, has never been achieved before in Belize’s basketball. Ironically, our records show that, aside from a couple senior championships won with the Christian Ambassadors team in his early years; prior to 2014, Leslie, in his first 16 years or so of competition, had captured only two major basketball championships, those being with the 2004 semi-pro BTL Nets and the 2011 Interoffice Bulldogs. Talking about storylines, this series certainly has it. 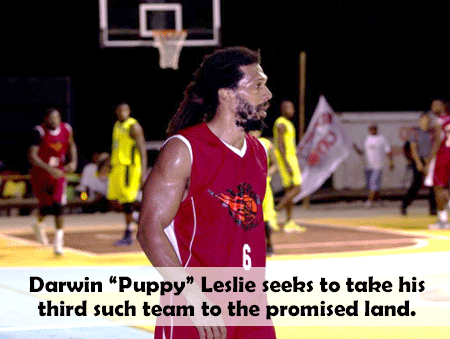 Getting inside the numbers, though, there’s a lot to unpack here. While the Ballaz come into this series with a highly potent offence of 76.2 points per game, second only to the Bandits, they will be without the services of their number two scorer in Richard Troyer, who, we understand, has returned to the United States for personal reasons. This, obviously, should have some adverse impact on team chemistry, and will undoubtedly shorten their bench. In a short series there is no room for error; the Ballaz must quickly find a reliable secondary scorer. Good for them, they have a cluster of talent to choose from in the likes of Daniel Nolberto, Elsworth Itza, Brandon Flowers, James Milton and Belizean American Gene Myvett.

Generally speaking, the Sharks have owned the Ballaz, and this has held to form during the course of 2017, with the Sharks winning convincingly in both games by an average margin of 19.5 points. They essentially outplayed the Ballaz in all facets of the game: offensive efficiency, rebounding, ball distribution, and team defense. Contributing significantly to the Sharks’ success was the league’s MVP, George Williams, who had his way in the two games, averaging 21 points per game, while dishing out 4.5 assist per game. On the flipside, Leslie has had sub-par performances, averaging a mere 9.5 points per game and 4.0 rebounds per game. This clearly will not get it done; even more so, given the loss of Troyer, who had a big game (22 points 5 rebounds) in their last meeting.

To summarize, we’ve got a perennial NEBL powerhouse in the Tiger Sharks, with their eyes affixed on a third championship; and an aging super-star in Leslie playing for keeps, as he pursues a fourth consecutive championship, which should put him in a class all by himself in Belize’s basketball history books. These plots make for a very entertaining semi-final round, and if we would base our analysis on the way this series has been one-sided, we would infer a very short series. But these are the playoffs, and super-stars traditionally have risen to the challenge.

The two teams in this bracket, the Belmopan Bandits and Dangriga Dream Ballers have identical (8-4) records, they both play well on the road, have excellent talent and team depth; but that’s where the comparison ends.

They split this year’s series, with both earning wins on the road, the Ballers 90-81 at Belmopan, the Bandits 69-65 at Dangriga. The Ballers, as they do against everyone, outrebounded the Bandits in their head-to-head match-ups this year, averaging 55.0 rebounds per game, compared to 45.0 rebounds per game for the Bandits, and, additionally, have protected the interior, averaging 5 blocks per game, to the Bandits 1 block per game. The Bandits clearly will need to mitigate some of its rebounding issues, defend the interior, and find easy ways to score. Their newest acquisition, Devin Daly should assist in this area, and when teamed up with the likes of Farron Louriano and Richard Smith III, should provide a formidable front court, with enough left on the bench to provide that extra oomph.

The Ballers, on the other end, have a very competitive roster; their backcourt in Lisbey Castillo and Dillmore Conorquie complements the front court of Tahj Wells and Quinton Bowen. Wells is a Bandit killer, averaging 22 ppg 14.5 rpg in the two games played against the Bandits, while his teammate Conorquie averaged 18 ppg 7.5 rpg.

By and large, the Bandits have a definite depth advantage and a variety of scorers, further bolstered by the on-boarding of Devin Daly, and it will take defensive discipline and the occasional scoring bursts on the part of the Ballers to get this job done. It doesn’t get any better than this in NEBL playoffs, the #1 offense going up against the #1 defense. The winner of this series should become the 2017 NEBL champions. Take that to the bank!!!! 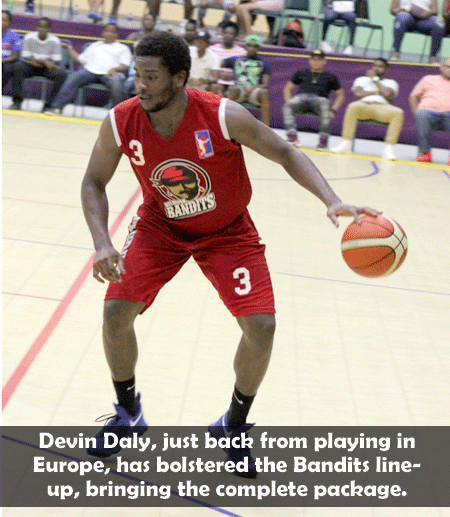 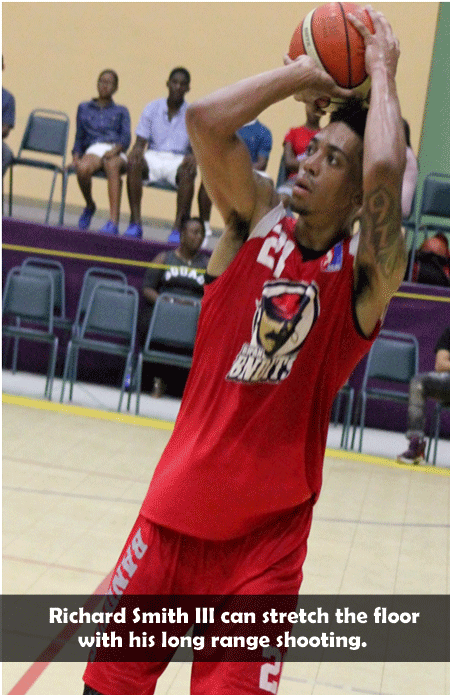 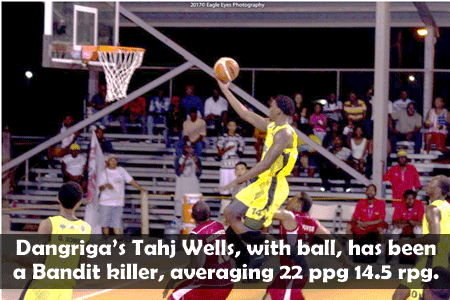