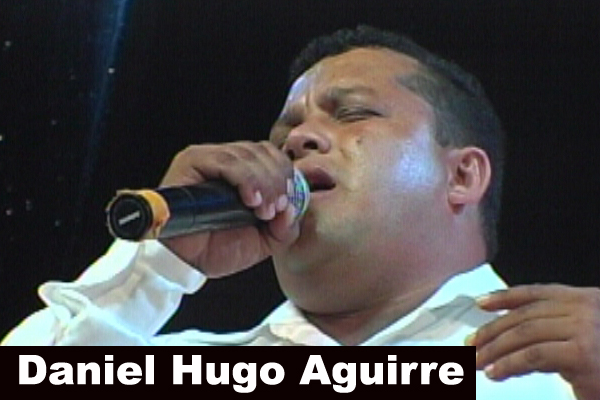 Aguirre, found burned to death in his taxi, was National Karaoke Latino champion

Justice might be on the horizon for the family of murdered and burned taxi driver, Daniel Hugo Aguirre, 37, the 2011 National Karaoke Latino Champion of San Martin, Belmopan. The charred remains of Aguirre were found about 6:00 Saturday morning in the Arizona area of Teakettle, Cayo District in his taxi, which had been destroyed by fire.

Police are convinced that a man who has been found with Aguirre’s licensed 9mm pistol is the person who carried out the grisly murder.

Noel Alexander Torres, 29, who is from the Arizona area but was residing at an Iguana Street address in Belize City, was arrested and charged for keeping an unlicensed firearm and ammunition, and handling stolen goods on Monday.

He was taken today to the Belmopan Magistrate’s Court, where he pleaded guilty to the offenses and was sentenced to 5 years for gun possession, 5 years for the possession of ammunition, and 1 year for handling stolen goods. The Magistrate however, ordered the sentences to run concurrently. Torres was then sent to the Belize Central Prison, to begin serving his jail sentence.

Police are convinced, however, that Torres murdered Daniel Aguirre and burned his body in the early morning hours of Saturday, September 7. If it is determined that the evidence they’ve gathered through their investigation can confirm this, they will bring charges of murder, arson, and destruction of property against him. The file has been forwarded to the Director of Public Prosecution, for her directives, and advice, after which Aguirre is to be brought back to court, and the charges levied against him.

The investigation into the murder was launched by Assistant Superintendent of Police Sinquest Martinez, Commander of the Belmopan Police, almost immediately after the smoldering car and the charred remains of Aguirre were found Saturday morning. With the help of witnesses and residents of the area, Martinez’s team of officers got valuable information that led to the arrest of Torres. The investigators from Belmopan went to Belize City and took him into custody about 1:00 Sunday morning, and transported him to Belmopan that same morning.

On Monday, he took the policemen to his family home in the Arizona area, in Teakettle, where he showed them where he stashed the licensed CZ-75 Compact 9mm pistol, which is the property of Daniel Aguirre, which was loaded with 20 rounds. The gun was stashed in the area of the latrine.

Police said that with Torres’ cooperation, they were also able to recover a butcher knife, which they believe was used to kill Aguirre.

Torres’ uncle, Miguel Dominguez, 49, of Arizona area, Teakettle; his wife, Blanca Dominguez, a 41-yr-old domestic of Teakettle, and his son, Miguel Dominguez, Jr., were present in the home at the time of the search, and they were also arrested and charged for keeping a firearm and ammunition without a gun license.

The three were taken to court and were all remanded to prison until December 12.

Torres’s girlfriend told Amandala that she and Torres were sleeping at their home in a building with several rooms occupied by different tenants on Antelope Street Extension, when about 1:00 Sunday morning police went to the house and awakened them. She said that all the tenants were also awakened and their rooms searched.

Her boyfriend, Noel Alexander Torres, was roughly arrested and cuffed and the apartment searched. Her passport was found, and on looking at its contents, the officers noted that she was a Nicaraguan national and had overstayed 8 days. She was also taken into custody and taken to Belmopan along with Torres, but instead of being charged, she was handed over to the Immigration Department which conducted an investigation. She was released today after her mother, a Belizean, vouched for her and paid for an extension visa for her, for a further stay of one month.

Torres’s girlfriend said that on Friday morning, Torres had left home, saying he was going to Belmopan, and did not return until Saturday. On his return he announced that he had a gun he wanted to sell. When asked where the gun was located, he reportedly replied that it was in Belmopan. She said that he was composed, and did not show any type of anxiety, or fear.

On the evening of the arrest, she had reportedly gone to meet him after work, and they had gone to a Chinese restaurant, where he had drunk several beers, and had also bought beers for some men who were in the restaurant.

They had later made some purchases at the market before going home. The girlfriend, who claims that she and Torres had been in a relationship for 3 months, said that she was alarmed when police came to her house to arrest him, and was horrified when she was informed that he was wanted for killing and burning a man. She strongly denied knowing about his whereabouts in Belmopan and is adamant that she did not know of his activities.

She said that she will not miss him, but feels sorry for his aunt, uncle and cousin, who are now locked away in prison until December 12. She said that his aunt is ill and not feeling well.

Commander Martinez said that dedication, persistence and commitment, along with the cooperation of witnesses, led to his team solving the case.

At about 6:00 Saturday morning, September 7, police received information of a burnt car with human remains that were burnt beyond recognition on its back seat on the Roaring Creek River Road about four miles behind Teakettle, in the Arizona area. The discovery had been made by a man who was driving on the road that morning.

When he spotted the burnt car, he emerged from his vehicle to take a closer look, and that was when he saw the charred body of a person on the back seat.

The man immediately returned home and called his elder brother, and they returned to the scene for a further inspection.

After further examination of the car and its license plates, they realized that the car belonged to Daniel Aguirre.

The man quickly went back to his house, where he called police, who went to the area shortly after.

The man, who knows Aguirre well, strongly believes that Aguirre was killed because the assailant wanted to steal his firearm, which was a licensed 9mm pistol.

Aguirre is the second taxi driver to be killed and robbed in the Belmopan area. Taxi driver Jose Mario Aguilar Umana disappeared on Saturday morning, July 13, and at about 4:30 Wednesday afternoon, July 17, his partially decomposed body was found in the new housing area off the George Price Boulevard in the City of Belmopan. However, this case has not yet been solved.