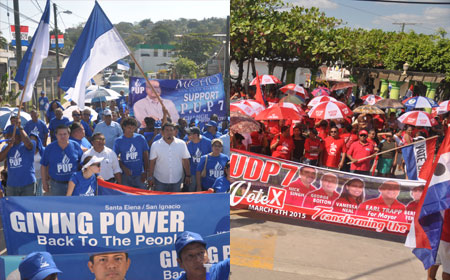 BELIZE CITY, Wed. Feb. 11, 2015–The incumbent United Democratic Party (UDP) and the Opposition, the People’s United Party (PUP), took their war machines into the streets of the twin towns of Santa Elena and San Ignacio for Nomination Day today. Both parties flexed their campaign muscles in parades that commenced in Santa Elena, then traversed the Mopan River into San Ignacio before stopping in front of the town’s police station, where nomination papers were signed upstairs in the Magistrate’s Court.

Shortly after 8:00 a.m., PUP supporters began assembling in front of standard bearer Dan Silva’s office in Santa Elena. Then, as the 10:00 a.m. hour approached, the crowd began to move off.

Quiroz said that apart from the issues of sanitation and street maintenance, the residents of the twin towns need employment. “There is a major unemployment issue affecting our towns”, Quiroz said.

In the last Town Council elections, Quiroz was defeated by the UDP’s John August.

This time around, Quiroz says, he is confident that he and his team will deliver victory to the PUP on March 4, elections day.

Later in the day, just before 2:00 p.m., the colors in the street changed from blue to red, as the UDP candidates and supporters began moving from in front of Hon. Rene Montero’s office in Santa Elena Town.

Their procession was accompanied by the sounds pulsing from a number of large speakers that were positioned on two flatbed trucks. UDP mayoral candidate Earl Trapp admitted to Amandala that employment for the residents of the twin towns is a concern that his town council would tackle if elected.

And like the PUP mayoral candidate who is confident of victory, Trapp said that he is confident that his team will emerge victorious, because the people of the twin towns have told him that they want to continue the progress made under the UDP stewardship of their towns.

Trapp said that one of their big plans is to start a tourist infrastructure project that would bring employment to many people and that some of the residents who have left the towns in search of employment at the cayes and in other parts of the country would be able to return home and find employment.