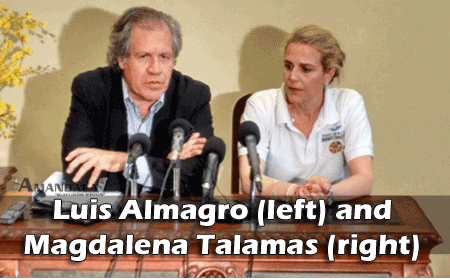 BELIZE CITY, Thurs. Apr. 21, 2016–The first visit to Belize by the Secretary General of the Organization of American States (OAS), Luis Almagro, has come to a close with little opportunity for the Belizean public to engage him in dialogue about the OAS’ controversial role in Belize.

During his visit, limited mostly to meetings with government officials, Almagro again announced the OAS’s unequivocal support for going to the International Court of Justice (ICJ) to get a ruling on Guatemala’s territorial claim to portions of Belize. The fact that the OAS refers to the ICJ as a “top priority these days,” despite the lack of community consultation or a referendum on the issue, begs the question if the OAS is truly, in a democratic fashion, addressing the desires of the majority.

The OAS visit seems to have been one in which only officials were addressed. No meetings were scheduled with unionists or community organizations that reject the ICJ as the path to peace. Perhaps more alarming was the time officially allotted for the Secretary General to meet the press, which was ultimately less than 15 minutes despite the crucial importance of the press in informing the public.

The OAS visit immediately follows the Guatemalan state’s rejection of the 11-point proposal put forward by Belize in efforts to formalize protocol in the Sarstoon River, which is divided between the two nations. The need for the formality has been sparked by the increase in Guatemalan militarization in the area and the forceful restrictions they have placed on unarmed Belizean civilians and even BDF soldiers.

Some of these actions by the Guatemalan military have been called “hostile and threatening” by the Belize Government. This is not surprising, considering that the Guatemalan military’s historic human rights record includes genocide and their current record includes violent evictions in Alta Verapaz, of people, including many children, whom the OAS Peace Fund claims to protect.

It is likely that the tensions in the Sarstoon were discussed during Almagro’s meetings with the Prime Minister and the Ministry of Foreign Affairs, all of which took place shortly after the rejection of the proposal was reported. The details of those meetings remain private and when Almagro was asked for his comment during the ten-minute long press briefing, he explained, “it is not in our mandate to reveal points of the negotiation…The situation you are referring [to] is something that happens in the way of the negotiations of the two countries. In any case, I don’t think we should have an opinion in relation to negotiations that have not ended, that have not finished. It’s very clear that we should be very confidential about that.”

The rejection of the Belizean proposal was reportedly met with a counterproposal from Guatemala that would require Belize to notify the Guatemalan forces before entering the shared river. Belizean authorities have noted that this counterproposal is not in accordance with the Boundary Treaty of 1859.

The fact that the negotiations are ongoing, as reported by Almagro, might reflect tension between the respective Foreign Ministries despite the fact that Foreign Affairs Minister Wilfred Elrington and HE Morales have in the past shown only camaraderie and wholehearted agreement on a change to the Referendum Act and a resulting arbitration by the ICJ.

That the OAS claims to remain “neutral” despite the well-documented violations in the Sarstoon River, is worrying to many dissenting voices, which include union members, members of the Belize diaspora, Citizens Organized for Liberty through Action (COLA), and the Belize Territorial Volunteers (BTV). The “neutrality” is called into question in other regions also.

During the short press briefing, when prompted about reports of a Guatemalan man and his two children being shot while planting in the Cebada area of the Chiquibul, the Secretary General Almagro said, “We have a problem there that we need the countries to ask us to make the verification of this problem. We cannot go voluntarily and spontaneously and assume the program… Both countries have said that they will ask for our verification—but we have not received any formal… request about that, yet.” Relying on formal requests might limit interventionism, but in Cebada and in those many cases on the Sarstoon, if the Belizean or Guatemalan government does not formally invite the OAS, then they, by mandate, cannot respond.

This might be cause for concern for those who make up the Belize Territorial Volunteers. If the governments do not agree to ask for a verification (and the official characterizations of the group may prevent this), the OAS might not “verify” even serious unconscionable violations.

What is in a mandate? There exist examples in our Central American and Caribbean regions in which the OAS has failed to protect democracy, or worse. Historic ones include excluding Cuba from its membership in 1962, accepting the membership of Argentina under Videla and working with Chile under Pinochet.

More recently, in Haiti (which has suffered inaction by the OAS during coups), leaked documents revealed that the OAS and the US State Department under Hilary Clinton worked together to push forward a presidential candidate despite the fact that he did not have the number of votes to legally be in the running.

Michel “Sweet Micky” Martelly, a former tonton macoute, became president and since, Haiti has seen the neoliberalization of the economy, widespread corruption, a continued occupation by UN-MINUSTAH, violence and the flourishing of big business.

In January, reports told of thousands taking to the streets in the capital of Port-au-Prince to protest the arrival of the OAS mission, still remembered for its undemocratic role in promoting Martelly (often quoted for desiring a dictatorial “Fujimori-solution” for Haiti). The OAS mission was called upon by Martelly supposedly to protect democracy, although under Martelly, the parliament was dissolved and local elections were postponed for years.

The OAS has also recently received criticism from neighboring Honduras where, shortly after meeting with the family of assassinated Lenca organizer Berta Caceres, OAS Secretary General Almagro tweeted that MAACIH would investigate, although the family members and Caceres’ organization COPINH specifically called for the Inter-American Commission on Human Rights (IACHR) to investigate her murder.

When asked about this today in the VIP Room at the Philip Goldson International Airport, Almagro, visibly frustrated with the question, said that this was “wrong” and explained that he has written in a communique and personal and organization twitters that, “if there is an angle about corruption in that case, we are going to investigate, but the rest of the case is fully for Inter-American Human Rights Commission.… And if they want to create a group based on that, I am very glad about that, and I am extremely helpful about that. And I have said that opinion at least three times before. I don’t know where… that is not understood. There is a lack of good faith in the information that is being distributed about that matter, because I cannot say it more times.”

Berta Caceres’ family has said, “We do not want MACCIH involvement at all… Almagro’s statement is muddying the waters and providing cover for the Honduran government.”

Not only in Belize, Haiti and Honduras, but also in Almagro’s home country of Uruguay he and the OAS have received harsh criticism for ignoring the wishes of those on the frontlines of defending democracy. In November of last year, the former Uruguayan president Jose Mujica publicly denounced Almagro’s failure to objectively assess the Venezuelan electoral process.

Almagro penned an 18-page letter expressing concern for the Venezuelan electoral process, but on December 6 when the right wing, largely funded by US business interests and multinationals, won the first parliamentary election in almost two decades and Venezuelan President Maduro accepted the results, Almagro and the OAS made no similar multi-page comment about the supposed undemocratic process, again raising concerns about whether the OAS is truly dedicated to the democratic process.

The first visit to Belize by this Secretary General Almagro, mostly with youthful participants of the OAS Peace Fund and with government officials, may not mean the end to the debate. When asked if he and the OAS had any intention to meet with those who are not in support of going to the ICJ, Almagro said, “I am open to have conversations about these matters with everybody. In Washington, or here. Everyone that asks for an appointment with me, he or she has it. So, there is not a problem with that. I am extremely open, and the Mission here is extremely open about that.”

BELIZE CITY, Mon. Nov. 23, 2020-- For the first time in seven years, Belize is projected to record a decrease in the yearly number...
Read more
Highlights

BELIZE CITY, Mon. Nov. 23, 2020-- In the early growth years of the Belize fishing industry back in the 1960s when cooperatives were just...
Read more
- Advertisment -