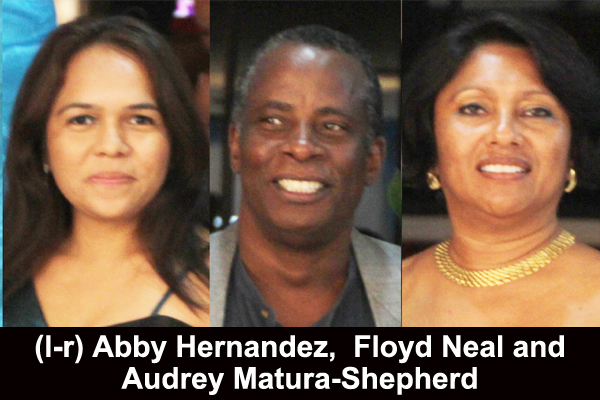 There are concerns, as we go to press this evening, that the existing staff of Oceana in Belize, who were hired under the leadership of former Oceana in Belize vice president, Audrey Matura-Shepherd, may be relieved of their jobs after a vacancy appeared online advertising for a new office administrator – this when the current administrative director, Floyd Neal, still remains in that post, holding over the headship of the Belize office after Matura-Shepherd demitted office last week.

The Oceana staff has been a handful – and it includes Abby Hernandez, accounts clerk and office coordinator.

Alex Munoz, Vice President for Oceana in South America, who now has responsibility for the Belize office and who is leading the search for a replacement for Matura-Shepherd, dismissed suggestions today that the existing staff—who may be deemed loyalists to Matura-Shepherd—would be imminently replaced.

Munoz told the media—at a press conference held at the Radisson Fort George Hotel in Belize City Thursday afternoon, where he was accompanied by Courtney Sakai, Chief of Staff—that the new office leader will have the opportunity to decide what staff they need; however, he suggested that more staff would be added to the Belize office. He also said that it is not true that the existing staff will be removed.

The staff were, however, conspicuously absent from today’s press conference, and when asked about them, Munoz said they were working at the office.

On the question of the ad for a new office administrator for the Belize office, Munoz said that Neal (who we understand returned home from the US to work with Oceana, beginning March 2011) is “free to apply,” but he made it clear that it is not a guarantee that Neal would get that position.

One notable change Oceana is making is that the Belize office will no longer be headed by a VP, the post which it had, in the beginning, advertised as vacant. The new head will be a country director. The second in command would be the office administrator.

If a new person were to be chosen for the administrator position, Neal could be deemed redundant, since, as Munoz confirmed today, the post Neal now holds and the new post would overlap. Munoz said that the office administrator would be given more responsibility than the administrative director now has.

Munoz said that they will respect the labor laws in Belize; and the new person—who he hopes would assume office by the end of 2013—will have leverage to decide staff needs.

The VP indicated that there have been more than 30 applications, primarily from locals, to head Oceana in Belize; but he would neither confirm nor deny reports that UNIBAM attorney Lisa Shoman, who publicly complained that the Oceana VP had made published comments against homosexuality and a move to overturn anti-sodomy laws, had submitted hers in the batch.

Munoz said that Oceana cannot afford to lose support, which it gets from people of diverse backgrounds. He told us that they don’t make an issue of people’s personal preferences.

As for the office changes, Munoz said that Oceana—which has offices in the US, Belize, Europe and Chile—has decided to change its executive structure, and so the country director will report directly to him. Previously, Matura-Shepherd reported to executives in the USA. He also said that “the new leader will be as autonomous as the first vice president.”

Oceana wants to stay and grow in Belize, said Munoz, who told the media that their focus will continue to be oceans, and the new country head would be expected to support their total commitment to fighting offshore drilling, illegal fishing, environmental pollution and other such causes in an effort to preserve the oceans.

Munoz also spoke of plans to bring in a communications specialist from overseas. We asked him to address the concerns of those who may see this as a form of damage control – given the fallout between Oceana and Matura-Shepherd over her activism against the LGBT agenda, and comments she penned in her Amandala column – “Right to the Point.”

Munoz said that bringing that person onboard is “completely normal,” as Belizeans will appreciate more resources and more professionals being here to improve efficiency.