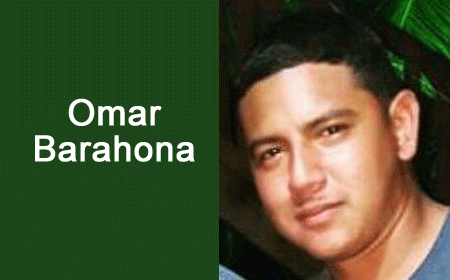 COTTON TREE, Cayo District, Mon. June 12, 2017–Death and heartache came to the home of Omar Barahona, 21, a driver of Cotton Tree village, at about 9:00 Saturday night, when a vicious gunman shot him in the back of the head in what his family says is a case of mistaken idenity.

Barahona was wearing a white T-shirt and was sitting on a motorcycle talking to his friend, Devon Alexander Brooks, 23, also of Cotton Tree.

We were told that Brooks had been seen driving through the village on a motorcycle, in a white T-shirt, and people believe that when the gunman went to kill him, he saw a man wearing a white T-shirt on the motorcycle and opened fire, not knowing that the man was Barahona and not Brooks.

Barahona had gotten employment in the United States to work with a lumber company and was getting well-wishes and farewells, as he celebrated with his family and friends in his yard in the village before his scheduled departure from the country, today, Monday, for the USA.

According to reports, Brooks had driven up on his motorcycle to tell Barahona goodbye. Barahona came out and they began to talk in front of the yard. Brooks got off the motorcycle, and Barahona sat on it, while Brooks stood beside him.

Then, a man came out of the bushes from across the road and fired a shot at Barahona, hitting him in the back of the head. As Brooks ran for cover, the gunman fired at him and hit him in the leg, but Brooks was able to escape.

The gunman then reportedly came up and stood over Barahona, who was lying on the ground, and shot him seven more times, and then he escaped.

There was confusion among Barahona’s friends and relatives, and they ran into the house. A family member told us that they saw the killer shoot Barahona at close range, but they were unable to help him.

After the killer escaped, they picked up Barahona and rushed him to the Western Regional Hospital, but he was declared dead on arrival. Today, his body was brought down to the Karl Heusner Memorial Hospital for an autopsy.

Nonetheless, according to police, the killer has been identified and police are on the hunt for him. Commander Gillett said that the shooting was prompted by a quarrel between the killer and Brooks – both of whom are known to police.

Barahona’s grandmother told us that the family is deeply shaken by this death. It happened right in front of them, and they are grieved that no one was able to help him. His brother is so overwhelmed with grief that that he said that he wanted to lie on the road so that a vehicle could run over him.

Barahona’s grandmother said that Barahona did not deserve such cruelty. She had been celebrating with him and had just returned to her home, about 200 meters away. Within 10 minutes, however, she heard a gunshot from the direction of his house, then more gunshots erupted.

She quickly called his house, but got no response — only sounds of hysteria, and then she heard his niece tell her to come, because Barahona had been killed.

She then rushed to the house, but they had already taken him to the hospital through a back road.

Facebook
Twitter
Pinterest
WhatsApp
Print
Previous articleUS Chargé d’Affaires of the US Embassy, Adrienne Galanek, speaks to media, but doesn’t say much
Next articleFrom the Publisher