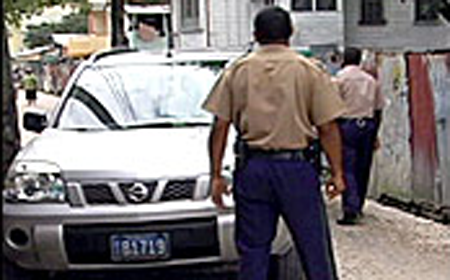 BELIZE CITY, Fri. Jan. 30, 2015–At about 9:30 a.m. today, a brazen crook made a failed attempt to make off with a government-issued grey Nissan X-Terra SUV belonging to Ombudsman Lionel Arzu.

The incident occurred in front of Fair Brothers Pawn Shop at the corner of Mahogany Street and Central American Boulevard. An employee of the Ombudsman’s Office had reportedly been using the vehicle at the time.

According to police, the employee left the engine running with the keys in the ignition and asked the security guard at the pawn shop to keep an eye on it, but an opportunistic thief who was apparently lurking in the area jumped into the SUV and took off.

While on his joy ride through the city, however, the thief crashed the vehicle on Glynn Street, which is located behind the Raymond Parks Night Shelter in the Mesopotamia area.

Deputy Commander of Eastern Division, Senior Superintendent of Police, Edward Broaster, informed the media during a press briefing today that the vehicle has been recovered and the suspect is being sought by police.

Police said that the suspect is known to them and as soon as he is apprehended, he will be charged for theft of a motor vehicle and damage to property.