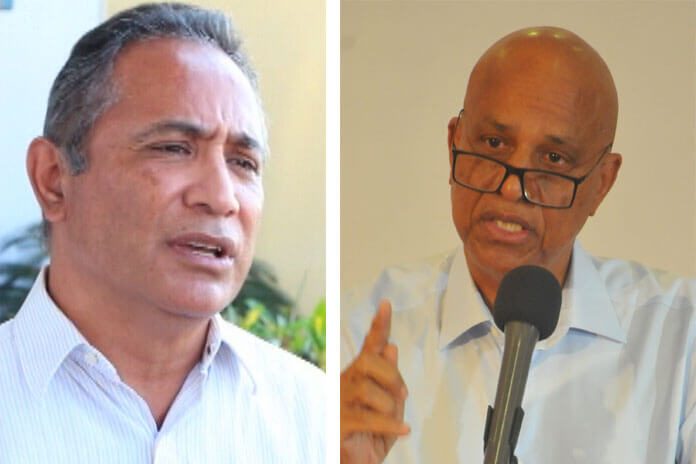 BELIZE CITY, Thurs. Dec. 5, 2019– The governing United Democratic Party (UDP) has placed heavy reliance on their claim that they are building the country’s infrastructure. The building of infrastructure, however, inevitably involves the awarding of large contracts.

One contractor who has gotten several multi-million dollar contracts from the Dean Barrow-led government, has been Imer Hernandez, a close relative of former Lands Minister and former Deputy Prime Minister Gaspar Vega.

Hernandez’s company has built several roads, of which the integrity of the construction work has been called into question. That, however, has not deterred the government from awarding him more multi-million-dollar contracts.

At the House of Representatives meeting yesterday, Wednesday, the Leader of the Opposition, Hon. John Briceño, area representative for the Orange Walk Central constituency, speaking on the adjournment, told the House that so far, Hernandez has been awarded 259 million dollars’ worth of contracts.

“Madam Speaker, he was driving a dump truck in 2008,” Briceño told the House.

Briceño went on to list some of the work that Hernandez’s company has done that subsequently was shown to have deficiencies after the completion of the construction work.
Briceño cited the Belize City Municipal Airstrip as one example of poor construction. “The airstrip had to close down because it was wavy and unsafe for the planes to land,” Briceño said. “It was the same thing with the Caye Caulker airstrip,” he said.

Briceño said the road at the northern border has been cracking, and the cement on the roundabout has been “breaking up”. “It is a shame that this is the first thing that visitors to our country are going to be meeting,” Briceño said.

Briceño went on to inform the House that they had written to the International Development Bank (IDB) because they wanted to record their concerns about the workmanship of Imer Hernandez’s company.

“I am calling on the British to review their decision, based on the track record of Imer Hernandez and Company, and the allegations of impropriety. I am also calling on the Caribbean Development Bank. They should know better. Eleven million dollars was given to this man to do the work on the Santa Elena border, and they know that the thing broke up. They know that the roundabout is breaking up and they will continue to give more contracts to this company. I want to let everybody know that the new PUP government will review these contracts with a view of canceling these contracts,” Briceño told the House.

In his response to Briceño, Prime Minister Dean Barrow suggested that the Leader of the Opposition had to have been smoking or drinking something to convince himself that he could cancel an international contract awarded by the British, or the CDB.

Barrow emphasized that the new contracts that Imer Hernandez and Company was getting were not given by the United Democratic Party administration. He said that they are international contracts awarded by international governments and financial institutions — the IDB, CDB, British, OFID, OPEC — after a process that has to pass the greatest possible degree of internal scrutiny. He said that after such scrutiny, every single one of these entities continue to give contracts to Imer Hernandez.

“I am glad that you called on the British, because you are telling the sovereign British government that you will cancel contracts awarded by them,” Barrow said.
Barrow insisted that Hernandez continues to do good work.