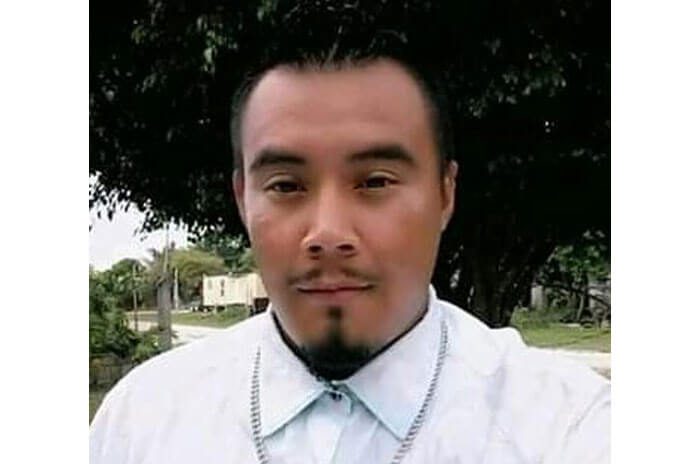 CAYE CAULKER, Belize District, Fri. Dec. 27, 2019– Oscar Cornel, 30, a member of the Trial Farm village council in the Orange Walk District, was found floating face-down in the sea near Hicks Caye (about 3 miles away from Caye Caulker) on Friday, after he was involved in a boat collision at about 7:30 on Thursday night, December 26. Cornel’s brother-in-law, Mario Rosales, 36, the boat’s captain, fell overboard due to the impact of the collision and was found at about 11:00 Friday night on an island about 8 miles from Caye Caulker. Rosales was taken to the San Pedro Polyclinic, where he is recovering.

A search party, after not having any success finding Cornel on Thursday night, continued their efforts on Friday morning, but it was not until 1:30 in the afternoon that his body was recovered by a search party consisting of police, Coast Guard officers and friends of Cornel. Reports are that he was seen with injuries to his head and body that were believed to have been inflicted by the boat’s engine propeller when he fell overboard.

Cornel and Rosales were working with Nautilus Water Taxi Express in San Pedro onboard the boat Baby Gazelle, and they were traveling from San Pedro to an area about 5 miles southwest of Caye Caulker to collect a group of 5 tourists who were traveling from Ladyville, Belize District, to San Pedro, onboard the water taxi, Sir Alex, that was being driven by boat captain Jermaine Williams.

Lieutenant Commander, Roque Canul, Operations Commander of the Belize Coast Guard, said that because of rough seas and poor visibility the boat captains did not see each other and the two boats collided. Both boats were damaged, and Captain Williams made his way to Caye Caulker, where he informed the authorities of the collision and an immediate search was mounted to find Rosales and Cornel, the occupants of the second boat.

Commander Canul said that Rosales was found stranded on the pier of a small island known as Cayo Rosario. He managed to swim about 2 miles to safety and was found in good health except for hypothermia after being exposed to the cold sea for about 5 hours.

The Baby Gazelle was found drifting in an area about 12 miles away from the crash site and blood was seen in the boat; it is believed that Cornel was injured in the collision before he fell overboard.

Two Coast Guard boats were used in the search efforts and the captains noted a south-westerly drift in the area that led their search in the direction of Hicks Caye, a path on which they found Cornel’s body.

Commander Canul said that the collision is being investigated to determine who was at fault. Canul noted that there are steps which must be carried out by boat captains to ensure the safety of themselves, their passengers, and their vessel, and these include having a lookout on the deck to see what’s ahead, having appropriate lights, traveling at safe speeds, and ensuring that all onboard are wearing life jackets.

Those who knew him said that Cornel was well-loved and popular, and that he was very active in his village. He was the only son of his parents and he had no children.