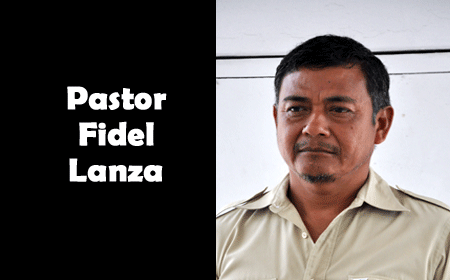 BELIZE CITY, Thurs. May 11, 2017–A jury of four women and five men deliberated for a little over two hours before returning into the Supreme Court of Justice Adolph Lucas tonight to announce their unanimous not guilty verdict in the trial of Fidel Lanza, 53, who was indicted on a charge of causing death by careless conduct in a traffic accident that caused the death of 2-year-old Rajahnee McFadzean on December 9, 2011, in Double Head Cabbage, Belize District.

The trial began on Monday and concluded today, when Justice Lucas summed up the evidence for the jury at the end of the three-and-a-half-day trial.

The Crown’s evidence was led by Crown counsel Sherigne Rodriguez, who called 5 witnesses to testify.

Fidel Lanza, 53, a pastor at Christian Academy, was defended by attorney Leroy Banner.

On December 9, 2011, around 7:30 a.m., Lanza was driving a Blue Bird school bus in Double Head Cabbage when he knocked down and killed Rajahnee McFadzean. Rajahnee and her 5-year-old brother were reportedly on their way to their babysitter when the accident occurred.

Rajahnee suffered a smashed pelvis and died hours after the accident.

In his summation of the evidence presented during the trial, Justice Lucas told the jury, “to find the accused guilty, you must be sure that he was driving that bus carelessly.”

“He has no burden to prove his innocence; the Crown must prove its allegation against him,” Justice Lucas explained to the jury.

The evidence presented at the trial confirmed that the child was squashed under the left front wheel of the bus.

Police pathologist Dr. Mario Estradabran, who performed the autopsy on McFadzean, testified that the child’s death was caused by “pelvic and right limb trauma due to road traffic accident”.

Justice Lucas also told the jury that one of the missing pieces of evidence in the prosecution’s case is how the child got to where the bus was turning on the feeder road.

The gist of the Crown’s argument was that there is the issue of the driver not being on the correct side of the road, and the fact that, in light of the speed at which the bus was travelling, the driver should have been fully focused on the road.

As he left the court area, Lanza told Amandala tonight that from the beginning, he has maintained his innocence.

“I want to thank God for the jury for coming up with the not guilty verdict,” Lanza said.

“From the very beginning, I have gone to the mother and expressed my grief and sorrow for causing her to go through all that pain, and also to her relatives,” Lanza said.