Pedophile gets 2 years for indecent assault of 3 young boys 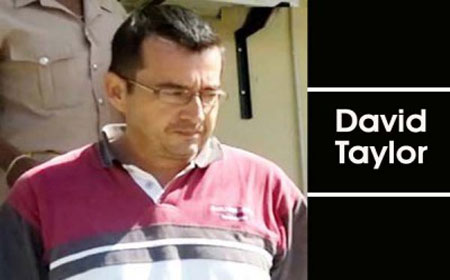 BELIZE CITY, Thurs. Sept. 1, 2016–A British-born man, who became a naturalized Belizean, pleaded guilty to three counts of indecent assault today when he appeared in the Independence Magistrate’s Court, and was sentenced to serve two years in prison.

David Taylor and his attorney, Ellis Arnold, S.C., appeared before Chief Magistrate Ann Marie Smith, who imposed the prison sentence for the first-time offender after he changed his not guilty plea to guilty.

Taylor’s case has been before the court since December 2012. This past June, he hired Arnold to represent him in his trial.

The evidence against Taylor was so overwhelming that he threw in the towel and apologized to his victims, who are three minors.

Court documents say that police found Taylor with over 500 pornographic photographs of his young victims, who were posed in a number of explicit sex positions with men.

Taylor’s victims, four young boys, testified at the trial that he molested them and forced them into homosexual acts with adult men and he also photographed them in various explicit positions.

At the last hearing, the prosecution, represented by Inspector Dennis Myles, closed its case and when the case resumed today, Taylor was supposed to present his defense. Instead of presenting his defense, however, Taylor changed his plea to guilty.

The convicted pedophile broke down in tears in the courtroom, but Myles told the court that any remorse that he was showing could not erase the scars that he had inflicted on his victims.

Taylor was sentenced to two years for each count, but the Chief Magistrate stipulated that the sentences are to run concurrently. Therefore, he will only spend two years in prison.