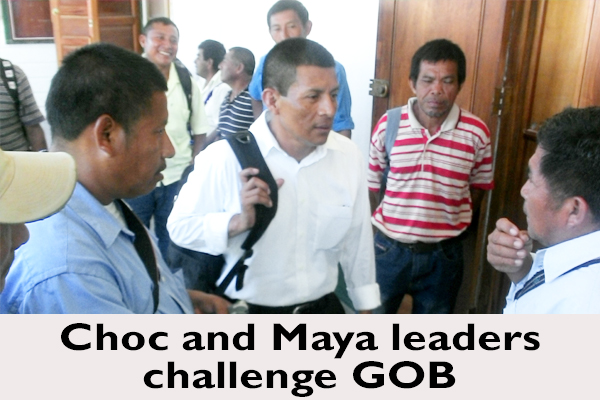 “They might as well just roll up that PSA and smoke it!” attorney for Maya tells Court

“We believe that it is fundamentally important to tie all of these rights affirmed by the court and international law that Belize has ratified to bring bearing on the Government’s issuance of development concessions—and one of them being oil development under the production sharing agreement [PSA],” Greg Ch’oc, Executive Director of the Sarstoon Temash Institute of Indigenous Management (SATIIM), the main affiant in the case, told the press when hearings began on Tuesday.

The Maya assert that the Government has given US Capital Energy the green light to drill on Maya ancestral lands and inside the Sarstoon Temash National Park—territory which they also consider ancestral lands—in a manner which violates their rights as landowners.

The Maya assert, furthermore, that no meaningful attempt was made by the Government to fulfill its obligation to gain their free, prior and informed consent before proceeding with granting the oil deals.

Eamon Courtenay, SC, attorney for the claimants, told the court that the Government has acted contemptuously against the cease and desist order that former Chief Justice Abdulai Conteh had issued in favor of the Maya. Whereas the Conteh decision was handed down on October 18, 2007, 11 days later, on October 29, 2007, the Government signed an amendment to the petroleum contract given to US Capital Energy—doing the same thing the order told them not to do.

The attorney told the court that on the face of it, the permit that Government issued to US Capital Energy, to drill inside the national park, is illegal.

“Under which section of the National Parks Systems Act is the second defendant [US Capital Energy] authorized to enter that national park?” Courtenay questioned.

He noted that a permit can only be given to enter the park to study flora and fauna inside.

“They are not interested in observing flora and fauna. They are bulldozing!” he told the court.

In arguing the Government’s position, Senior Counsel Denys Barrow told the court that given that petroleum ownership is vested exclusively in the Government, the Maya do not have the right or capacity to give consent to petroleum exploration.

“They do not have capacity to say, ‘We do not consent, so the permit is no good.’ The most they can do is to say, ‘You need our consent to enter upon our lands…’”, Barrow stated.

The judge observed: “the minister has power to override it…”

Justice Arana later noted that what the law boils down to—which really gives the minister the power to permit entry on to private property via an order, where the oil company and landowner can’t reach an agreement—is that they don’t need to consult with anyone.

Barrow added to this that, “…it would be nonsensical to have complete ownership to what is under surface and someone can prevent you from accessing what you have a right to. The law makes a sensible provision for it…”

He said that it would be, as a matter of common law, that the owner of that petroleum right would have a right to access the land.

Justice Arana questioned whether, in light of the fact that the existence of Maya land rights has been established by the Supreme Court and Court of Appeal, Government should have waited until the issue of demarcation is settled or whether perhaps Government should have compensated the Maya for the land in question.

Barrow replied, saying that the original oil contract dates back to 2001, even before the Maya land rights cases of 2007 and 2010 were filed, and that makes it extraordinary for them to be seeking to quash that contract now – in 2013. He added that time has long exceeded what judicial law permits for them to bring such a challenge before the court.

Barrow said that while the National Park Systems Act was made on January 2, 1982, the Petroleum Act was made in 1991. Whereas Courtenay had contended that the Petroleum Act is subject to the National Park Systems Act, which limits what can be done inside the national park, Barrow said that “that is fundamentally, vastly wrong…” since, in his view, “the basic principle is that a later act trumps an earlier act; and if the later act is inconsistent with [the] earlier act, it impliedly repeals the earlier act…”

For his part, though, Courtenay contended that no drilling can be allowed inside the national park—and that, he said, has nothing to do with who owns the oil.

“They might as well just roll up that PSA and smoke it!” the attorney for the Maya told the Court.

In his presentation, Senior Counsel Barrow conceded to the court that “there has to be room for consultation and accommodation.”

He said that Ch’oc makes it plain that there had been exchanges in the form of letters and meetings between the Government and the Toledo Maya. He said that one of the points which emerge is that the Government had offered the Maya 2% of the Government’s 5% portion of the oil profits it would receive from US Capital Energy—a proposal which the Maya had rejected, he told the court.

Barrow claimed that the Government had taken “prudent, considerate measures” to limit petroleum works to 10 kilometers away from the Maya villages in most instances—an assertion which the attorney for the Maya later refuted, saying that there is affidavit evidence indicating that the site locations clearly encroach on Maya ancestral lands.

As for Government’s claim that it has consulted the Maya, Courtenay said that this assertion is “scandalous!” He said that the consultations which take place within the context of the review of an Environmental Impact Assessment (EIA) cannot satisfy the legal right to the Maya to be properly consulted, with the view of achieving their free, prior and informed consent.

He said that the Maya were given only 20 days to study an EIA document which was over 300 pages long. Furthermore, he noted, the Chief Environment Officer, who heads those consultations, does not have the jurisdiction to address the socio-economic concerns—such as the need for roads and other village infrastructure—which would be addressed in the context of the broader petroleum consultations with the Maya communities.

Courtenay said that it is the responsibility of the Government to ensure the demarcation of Maya lands, and if there is uncertainty about exactly which lands fall within the range of Maya ancestral lands, the court ought to, nonetheless, protect those subsisting rights.

The Inter-American Commission on Human Rights had found violations against the Maya of Belize, despite the fact that no lands have yet been demarcated, he told the court.

Courtenay said that whereas Senior Counsel Barrow launched an attack on the fact that the lands have not yet been demarcated, the 2007 order by Chief Justice Conteh enjoined the Government of Belize to demarcate the lands in consultation with the Maya.

Michael Peyrefitte, attorney for US Capital Energy, rose after Barrow made his presentations, and told the court that there is no assertion in the claim that his client had done anything outside the permits granted by the Government of Belize. He said the case is really between the Maya and the Government, and he adopted the submissions made by Barrow.

Barrow told the press, in explaining his case, that whereas there was evidence that was advanced which proves customary land rights in respect of these particular areas, the issue is not whether they have rights—the court has so declared—but exactly where these rights can be applied.

“It is for the claimants to prove where those rights exist, and no evidence has been advanced,” Barrow insisted.

Barrow had explained that provision was made in the permit to exclude a portion of the national park, due to Conteh’s decision on Conejo, which was never appealed.

He said that there may be a wide range of rights, some of which may be exclusive to the Maya, and some of which may allow uses by others. Included in those rights may be rights to go on lands for ceremonial, spiritual and religious purposes, or to traverse areas to collect leaves, cut cohune, hunt, fish, and so on.

We asked Ch’oc whether there could ever be a win-win situation.

“I think there is always a win-win situation,” he replied, “that is what this struggle is about. I think that there is — in other circumstances there would not have been a need to come to court to get rights that are affirmed by the Constitution, to have the court vindicate those rights once more.”

Ch’oc confirmed indications to our newspaper that the village of Conejo has instructed its attorney to challenge the construction of a road for petroleum works through their village without their consent.

He said that Conejo has asked its attorney to move the process forward—a case in which they may pursue a claim for damages directly against US Capital for cutting 3 miles of seismic trails inside Conejo contrary to permit and Supreme Court order, Ch’oc said.