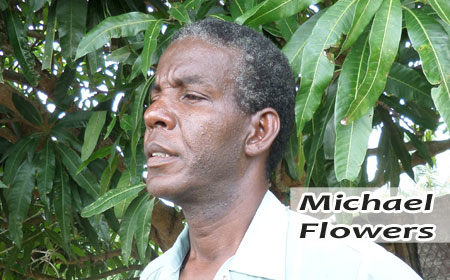 MORE TOMORROW ROAD, Cayo District, Thurs. June 4, 2015–A vigilant watchman of a pig farm on the More Tomorrow Road is now bereft of his common-law wife, Paula Zaharias, 46, the mother of his 5 children, who was shot in the head at about 1:30 this morning by one of three thieves who fired about nine shots at them in their house after the watchman caught them trying to steal pigs from the farm.

The bandits then fled the area empty-handed.

Paula Zaharias was taken to the Belmopan Hospital, where she was declared dead on arrival at about 3:30 this morning.

The pig farm, belonging to Michael Flowers, is located on the More Tomorrow Road about three miles from the village.

Flowers told Amandala today at the farm that the caretaker, 51, whom he only knows as “Primo,” told him that he, Paula and their five children, ranging in age from 3 to 15 years, were in the farmhouse this morning at about 1:30 when he heard noise coming from the pig sty where the large pigs were kept.

He opened the door to see what was happening, and that was when a gunman fired at him and he immediately took cover on the floor. The man was firing at him from in the yard, but at the same time, another thief who had been “lay-waiting” them on the back verandah began to fire into the house, and one of the bullets hit Zaharias in the head as she took cover on the bed.

Primo and the five children took cover on the floor, and they were not hit.

Flowers said that he later checked his pig stock and they were all accounted for.

Flowers noted that the watchman, Primo, had just started to work for him on Sunday, and his wife and children came to live with him in the house on Monday.

Flowers said that he began to look for a new watchman because about two weeks ago, thieves went to the farm and stole five large pigs, valued at about $2,500, and the watchman at the time was not aware that the pigs had been stolen because he was not vigilant, but was sleeping. He found them missing in the morning when a count was made, and saw a blood trail that led to the road.

Flowers surmised that the men who stole the animals may have returned, but unexpectedly encountered a more alert watchman. He said that he hopes the police find the killers, because he does not want anyone else to be killed for the pigs.

Flowers said that this brazen action caught him off-guard because nothing like this has ever occurred before in the area.

He had envisioned that he would go into pig-raising on a large scale and eventually live on the farm, and had cleared a 5-acre plot on which to plant corn and other crops to feed the pigs, but this vicious attack has caused him to put the plan on pause, and begin to do things differently until the killers are captured or the situation resolved.