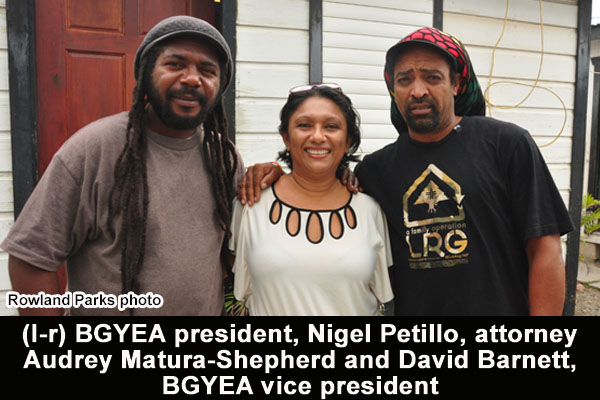 Local grassroots organization, BGYEA, is requesting the public’s support this Saturday in their struggle to access the Harmonyville Buffer Zone

This Saturday, June 7, the Belize Grassroots Youth Empowerment Association (BGYEA) will hold what they call a “Plant di Corn rally” from 9:00 a.m. to 1:00 p.m. at the Battlefield Park in Belize City to garner support from the wider public in their efforts to pursue a proposed agricultural project at the Harmonyville community which has recently been blockaded by the Ministry of Natural Resources and Agriculture.

The organization is calling for support from other local activist organizations, concerned citizens, the business community and the public at large in the face of a court injunction which was sought by the Government of Belize (GOB) late last month to prohibit the representatives of BGYEA from carrying out any agriculture-related activities in the 29-acre Harmonyville Buffer Zone that separates the community from the George Price Highway.

This morning Amandala spoke with BGYEA’s president, Nigel Petillo, and he told us about the purpose of the rally and why citizens need to come out in full force.

Petillo noted, “This rally is a symbolic gesture to show that we as a people need to take it on our own to plant seeds and reap the fruits of development because our nation is at a point where there is high unemployment, children dropping out of school, the crime situation is escalating and we desperately need to find solutions to the problems that we are faced with. BGYEA acts as an extension of the plan to alleviate poverty and we are prepared to work with any government, any organization, and any individual who is geared towards positioning our grassroots people to contribute positively to our economy and our country on a whole.

“As voters, we should be able to access resources that will impact our lives such as education, jobs and land, which is one of the most important resources, so, for the ‘Plant di corn rally’, we are calling out all our brothers and sisters and all Belizeans to come out this Saturday because we all have a major role to play insofar as dealing with the resources of our country.”

Petillo mentioned that there will be a full line-up of entertainment in the form of Belizean artists such as Ras Indio, TR Shine, Blackberry, Consigo, and Positive Vibes who will perform for the audience, as well as different DJs who will be providing music for the event.

“It’s an opportunity where you can bring out the kids as well, because our kids need to be informed about these issues that are taking place in our country, so we are also inviting the students from the different schools to be present and be involved so that they could be a part of this challenge now to ensure that they do not find themselves in this position later on in life”, explained Petillo.

The founding members of BGYEA have had a rocky relationship with GOB, particularly the Lands Department, since the organization managed to procure around 1,300 acres of government land between Miles 41 and 42 on the George Price Highway which, ironically, later became known as Harmonyville.

BGYEA has often complained about the series of difficulties brought on the community by the Lands Department in what they see as an effort to demoralize the organization and thwart their plans – the latest being an initiative to use the buffer lands for a seasonal corn cultivation project that, according to BGYEA, would generate much-needed income for the infrastructural development of the community. A date for the activity had already been set, but that was halted in its tracks when the Government sought an injunction to prevent any activity in the buffer zone, citing the fact that it is Crown land and should be left in its natural state.

For that reason, Petillo explained that the support of the general public is necessary to send a stern message to the government that they (GOB) need to understand what’s happening and get on board, or face the repercussions.

“Right now we are trying to get our community developed, and one of the main things that we are faced with is that fact that we need to get some roads into the Harmonyville community – without roads we can’t access our land and the land won’t get developed; if we can’t develop the land then we can’t pay the Government the taxes and the monies they ask for, so we came up with ideas as to how to build roads for our community and the investment in the buffer is just a part of the plan for us to develop Harmonyville,” Petillo said.

“Now,” he said, “we are faced with an injunction where the government is taking us to court and we have to build a case; we have to show the country and the court why we need to do what we are doing in order to build the community. GOB is tasked with building roads throughout the country; what happen to us? Aren’t we a Belizean community? Why can’t they build roads for us? Well, we decided that we will task ourselves with the burden and find the resources necessary in order to build our roads, but why is it that we are being faced with the hurdles that our government is bringing down on us now?

“When you have your own government threatening you about imprisonment for doing good, then it’s a whole different ballgame – the scenario changes. I’m only hoping that eventually they are going to get on board and understand what’s taking place and the implications of not getting on board this initiative.”

He said, “I don’t think the issue of the buffer zone is one of agricultural production. I think the majority of the Belizean public supports the concept of BGYEA and the development in Harmonyville, [but] I think what we have is quite frankly, a tricky situation where assets not owned by a particular party have been contracted out to others. That’s at the end of the day the long and short of the problem at this point in time. I really don’t want it to be an agriculture thing, because it is not an agriculture issue. As it relates to the development of the land held by the individuals of Harmonyville, of course, we would be more than happy to assist them in any way to put the land into productive use.”

As we’ve reported, the case for GOB’s injunction against BGYEA will go before the court next Friday, June 13.

BGYEA is encouraging those who come to the rally to bring out whatever they can, such as fruits, refreshment, water and even corn, and anyone who wishes to assist can call Ya Ya Marin Coleman at 661-8050.