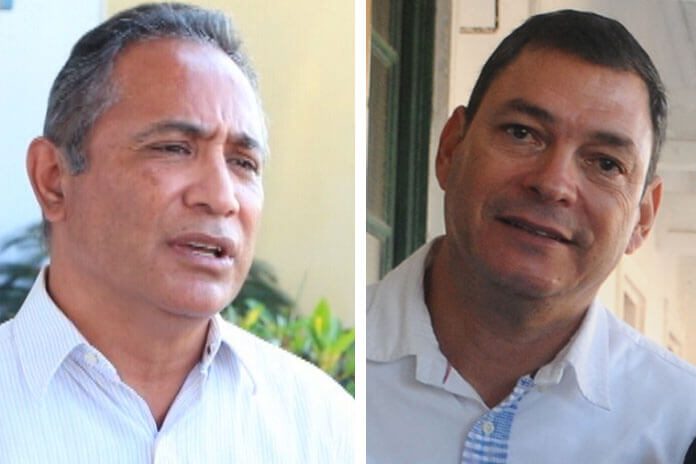 So says a Supreme Court ruling

BELIZE CITY, Fri. Jan. 31, 2020– After some delays in delivering his judgment, Chief Justice Kenneth Benjamin ruled this morning that the United Democratic Party government, under the leadership of Prime Minister Dean Barrow, has spent $1.3 billion unconstitutionally. PM Barrow, as Minister of Finance, spent the money without parliamentary approval, and that was in violation of the Constitution of Belize and also in violation of the Finance and Audit Reform Act, the Chief Justice said in his ruling.

The claimants in the civil lawsuit were two Opposition People’s United Party parliamentarians.

In March 2019, the Leader of the Opposition, Hon. John Briceño, Orange Walk Central area representative, and Hon. Julius Espat, Cayo South area representative who is also the Chairman of the House of Representatives Public Accounts Committee, sued Prime Minister Dean Barrow for violating the Finance and Audit Reform Act and the Constitution of Belize.
Financial Secretary Joseph Waight and the Attorney General were also named as defendants in the lawsuit.

The primary remedy that the Opposition’s lawsuit was seeking from the Supreme Court in their fixed date claim was an injunction to restrain the Prime Minister from spending public monies from the Consolidated Revenue Fund without the approval of Parliament.

The injunction that the Opposition was seeking, however, was not immediately granted. Chief Justice Benjamin gave Prime Minister Barrow six months to amend the Constitution to address the government’s unconstitutional spending.

Notwithstanding that setback, the ruling underscores a major victory for the Opposition in getting the high court to pronounce that the government had violated both the Constitution of Belize and the Finance and Audit Reform Act, which sets out the parameters for how public moneys are to be spent.

Following the ruling, lead attorney for the claimants, Eamon Courtenay, S.C., made remarks to reporters about the court ruling.

Courtenay said, “To put it in plain man’s language, the Chief Justice, and these are my words, found that the Prime Minister has been operating the government like a panades shop, and the result of this judgment today is to tell him in no uncertain terms that he must comply with the Constitution, comply with the Finance and Audit Reform Act, and go to Parliament and get approval, giving full disclosure as to how he intends to spend the people’s money, and that he should stop behaving unconstitutionally.”

Courtenay was asked if there was any indication from the other side that they would appeal.

He replied, “I suspect if the government were to continue with its behavior, I would expect that they would appeal. The problem with having an appeal in these circumstances, as those of you who were here would recall, and the Chief Justice repeated it, that their counsel conceded these unconstitutionalities which the Chief Justice has found. So I think it would be a waste of the people’s money if once again we are appealing something that they have conceded.”

“We should not forget that something must be radically wrong with a government who hires an expensive Queen’s Counsel to come to Belize, to stand up in court and concede a case. Why have they not gone to the National Assembly and corrected this if their own lawyer came to court and said that they were acting unconstitutionally? It’s an utter and complete disgrace. As I say, they are behaving as if this is a panades shop,” Courtenay emphasized.

Hon. John Briceño was also present for the Chief Justice’s ruling and he had this to say to reporters: “Well, certainly, first of all, I think that we are very happy with the judgment, and I think it is time that the Prime Minister understands that the people’s money is not his money, and that he needs to be able, as the Minister of Finance, to give account of every cent of the Belizean taxpayers’ money that he spends.

“But, what next? Well, I am going to be meeting with my parliamentarians and we are going to discuss in more detail the judgment and then wait and see what it is that the Prime Minister is going to do. I would not be surprised if the six months would be up and then the Prime Minister does not make an attempt to amend the Constitution.”

“So, we will wait, but we are going to keep the Prime Minister’s feet to the fire,” he said.
The Leader of the Opposition was asked, “If he is to amend the constitution, will he not need your support?”

“Absolutely, but that is why I am saying, I need to sit down with our parliamentarians to discuss that, but just as important, we have to see what the amendment is going to be before we can say yes,” Hon. Briceño replied.