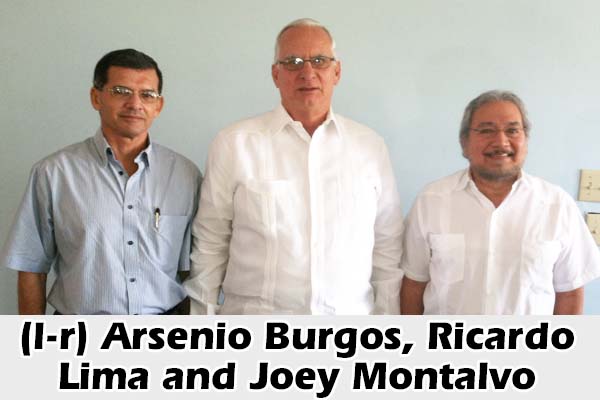 BSI tells cañeros take their “beef” to the court!

The current crisis facing Belize’s sugar industry could not just result in multi-million-dollar losses in the north—but could also trigger dire domino effects on Belize’s macroeconomic landscape, should the gridlock between the 5,339 listed cañeros and the Belize Sugar Industries (BSI), a subsidiary of American Sugar Refining, continue to persist beyond December 15.

That’s the longest possible date that cañeros can hold out before harmful effects are visited upon the industry, and the cañeros themselves, BSI officials told the media at a press conference they held at the Radisson Fort George Hotel in Belize City on Tuesday morning.

However, cañeros are not backing down from their demand – that demand being that BSI should give cane farmers a share of the monies they have earned from the sale of power generated from bagasse, because an agreement between the parties stipulates that they are to get a share of funds earned from by-products of the sugar cane.

At their annual general meeting in San Roman this Sunday, the cañeros passed a motion, affirming an earlier decision that no cane will be delivered to BSI’s Tower Hill factory unless a final deal is struck on the sharing of the revenues from bagasse cogeneration, from which power is sold to the national grid. Cañeros are asking for a payment of $10 per ton.

However, BSI-ASR contends that the monies cañeros are clamoring to get from bagasse pales when compared to what is at stake – and the financial assistance for programs they stand to lose if the matter continues unresolved much longer.

Deputy Prime Minister Gaspar Vega had been trying to broker talks between the parties; however, despite a four-hour-long session with cane farmers on Friday, they remained this week at an impasse.

Ricardo Lima, ASR’s Vice President – Technical Services, who said that he has been flying back and forth to Belize to try to resolve the dispute, said that further invitations were made to the cane farmers for a meeting this week—to no avail—so cane farmers should take their case to the court.

Ortega said that this matter needs not go to court, and he told us Tuesday afternoon that they will ask the Prime Minister to intervene.

Prime Minister Dean Barrow—who has sided with farmers, in saying that they do deserve compensation for bagasse—warned today that cane farmers cannot consider it helpful for the industry, for the economy of the north, or for the country for there to be a talk of a strike and the non-commencement of the crop.

“That will hurt all of us, but will hurt most the farmers,” he said at a press conference held at the Belize Biltmore Plaza Hotel today.

“We don’t want anyone to lose … That is why we have asked them from ever since, ‘Let us finalize the agreement.’ They have been dragging their foot,” BSCFA Vice President, Alfredo Ortega, told Amandala Tuesday, via phone.

BSI has agreed to discuss the bagasse issue – but, they say, that commitment would be made “without prejudice” – a caveat which has turned off cañeros from wanting to meet on those terms.

In a statement delivered to the media on Tuesday, BSI chairman Arsenio Burgos cited that portion of the cane purchase agreement, which is at the heart of the dispute.

The parties—BSI and the cane farmers—are, however, split on the interpretation of that clause of their agreement, which dates back to 1989. Cañeros say that bagasse is a by-product; BSI contends that it is not.

Amandala asked the BSI reps: “Could you clarify for us what was envisioned at this time that this clause was put into effect?”

“This is where we are having the fundamental dispute: the definition of by-product,” Joey Montalvo, BSI’s CEO said.

Belezario Carballo, BSI’s Chief Financial Officer, told the media that since the bagasse co-gen operation began, BSI’s subsidiary, BELCOGEN, which is the company formed to run the operations, has suffered a cumulative loss of $12.5 million.

However, cañeros are not buying that claim. They have not presented a financial statement that would demonstrate that, Ortega rebutted.

“How could I believe that? How could you operate a plant that you are not paying any cent for the fuel and you are telling me now that you are losing?” Ortega questioned. “That’s unbelievable…,” he said.

In a significant development today, Prime Minister Dean Barrow signaled that he and his Cabinet believe that the bagasse is a by-product of the sugar cane, and as such cañeros should get compensated.

However, he differed with the decision of the cañeros to strike until the bagasse agreement is hammered out. Instead, Barrow called on cane farmers to get working, and he said that financial aid for road works would be put elsewhere if the cañeros don’t intend to deliver cane.

Sugar roads, including 6 miles of a primary artery in the San Antonio area, have been rendered impassable, and Government has committed millions to road upgrades, under an umbrella scheme to spend over $200 million over the next three years to upgrade the national road network.

“We are convinced—and as a lawyer, I am entirely satisfied that there is every basis for our conviction—we are convinced that the farmers have a case,” Barrow said at today’s press conference.

Barrow added that the position was reached after reviewing the provision in the memorandum of understanding which talks about the sharing of revenue.

“In our view that clearly contemplates some form of compensation to farmers for the bagasse. The argument that the bagasse is waste and is not a by-product cannot stand,” he asserted.

He said that when the bagasse is used for other purposes – and not discarded as waste – it’s not possible to say that the bagasse is not a by-product.

“To me it doesn’t hold water for that argument to be made. So we are absolutely positive that the farmers have a case and that that case needs to be addressed,” Barrow said. “Now we part ways with the farmers in terms of the manner in which it seems that they are determined to make their case.”

Barrow said today that if farmers don’t start the crop by December 15, the country would be faced with “all sorts of problems.”

He said that he will try to meet with farmers no later than next Monday, December 2.

Barrow said that he will ask his deputy, Vega, who has been meeting with cane farmers in his absence due to medical leave, to attend those meetings with him.

After meeting with the BSCFA, said Barrow, he will then be prepared to go to ASR and see if they can kick-start the process to lead, if not to resolution, at least an understanding that will allow them to move forward, to permit deliveries to take place while the parties are working out the solution to the bagasse dispute.

Barrow said that he had been advised by former BSI director, Godwin Hulse, now a member of Cabinet, who has described bagasse as “solid fuel.” Hulse is not at all hostile to ASR, and he is saying that on the basis of science he could confirm that indeed solid fuel is what bagasse is, and this fact influenced Cabinet to take its present position – that bagasse is a by-product and must attract some form of compensation to farmers. A decision on the quantum and form that compensation will take, said Barrow, is far way down the road.