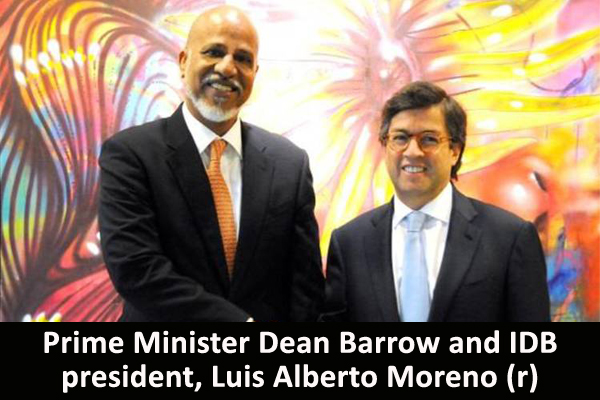 According to a release from his office, Prime Minister Dean Barrow, who left the country on an 8-day personal/duty leave this past Tuesday, May 27, is currently in Washington DC, where he visited the president of the Inter-American Development Bank (IDB), reportedly to discuss Belize’s relationship with the bank and other priority areas of collaboration.

A release issued by the IDB today reported that Barrow met with IDB president Luis Alberto Moreno, and they spoke about the IDB’s recently approved new 4-year country strategy with Belize, which focuses on public expenditure efficiency and effectiveness, and on promoting private sector development and sustainable export-led growth by concentrating on four priority areas, namely, education, tourism, transport and trade, and tax policies.

The 2014 lending program with Belize focuses primarily on road rehabilitation and education, and includes five loans supporting agriculture, citizen security, water and sanitation, solid waste and flood mitigation to the tune of 38 million US dollars.

The Prime Minister’s first stop, however, was in Houston, Texas, where he reportedly received medical attention for his ailing back, before travelling to Washington DC.

During his absence, Deputy PM Gaspar Vega will act as Prime Minister from May 27 to 31, and Minister of National Security, John Saldivar, will hold over from June 1 to 3, when Barrow is scheduled to return.

China became the majority shareholder of companies based in the country by Europeans and Americans. Xi Jinping took advantage of the markets’ panic over...
Read more
- Advertisment -