The meeting was about land sitting idle that the people needed, but Nigel Petillo, who organized the event, was charged for violation of Emergency Powers Regulations. 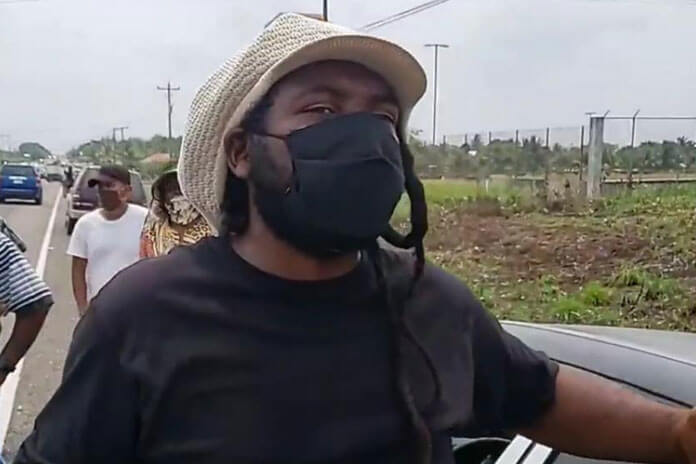 HARMONYVILLE, Cayo District, Sun. May 17, 2020– Nigel Petillo, 44, an activist of Harmonyville, was arrested and charged with violation of Emergency Powers Regulations for movement outside curfew hours without a valid reason and for not wearing a mask.

He was ordered to appear in the Belmopan Magistrate’s Court to be arraigned on the charges.  A conviction for such offenses under the Emergency Powers Regulations could result in a fine of $5,000 or 3 years imprisonment.

Petillo was charged because he organized a massive meeting in Cotton Tree, which was attended by about 700 persons.

The people converged on an area in Cotton Tree, Cayo District, where 2,500 acres of land was identified by Petillo as land that was for the taking, since its owner, who was reportedly a foreigner, is no longer alive, and millions of dollars were owed in taxes to the Government.

Petillo said that the land should be freed up by the Ministry of Lands and distributed to the people, and Petillo had organized the mass meeting to bring pressure on Government to give the land to the people.

However police were a “kill-joy.” They intervened and unceremoniously broke up the meeting and dispersed those persons who were in attendance at the meeting.

Police said that the meeting was an illegal gathering and that it was a violation of the Emergency Powers Regulations, which were enacted to combat the spread of the deadly COVID-19 virus. Those regulations prohibit more than 10 persons from gathering at any location in the country.

Petillo was told of the offense, and the crowd was dispersed. Petillo, however, told the crowd that when the regulations are lifted, another gathering will be organized.

He was on the verandah of his house shortly after midday, when police came to apprehend him. He was taken to the Belmopan Police Station, where he was booked for the offenses, but he was released after he was charged.

There were live recordings by reporters of the event and Petillo’s arrest. PGTV was with Petillo when the police came for him at his house, and the event was videoed and went viral on Facebook.