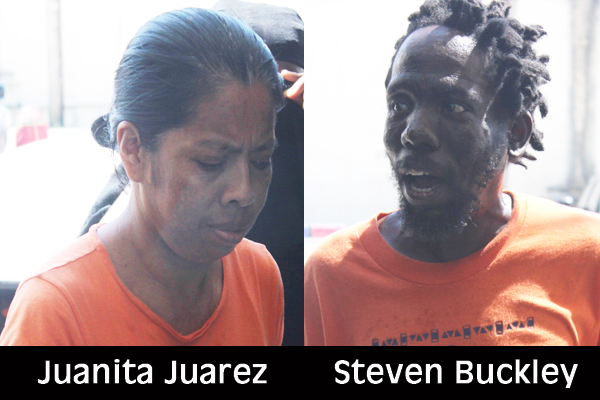 Steven Buckley, his wife and son, and three of their friends were arraigned on a charge of being in possession of a pipe adapted to smoke a controlled drug when they appeared this afternoon before Magistrate Hettie Mae Stewart, who released them on a $700 bail and adjourned their case to May 29.

Buckley, however, was charged with possession of 0.4 grams of cannabis. He pleaded guilty and Stewart fined him $60, which he has to pay by May 2. If he defaults on payment, he will spend two weeks in prison.

According to the police’s statement which was read in court, they (the police) visited Buckley’s George Street home around 10:00 a.m. in search of guns and ammunition, but came upon the cannabis when they searched inside Buckley’s room.

Before the police’s facts of the charge were read, Buckley, who is partially paralyzed from the blast of a police shotgun he suffered in 2010, in a case of mistaken identity, demonstrated to the Magistrate the size of the cannabis which was found, by holding his thumb against his index finger, saying, “it was just wan lee roach.”

In the case for possession of the pipe, Buckley is charged along with five others — his common-law wife Juanita Juarez, 46; and their seventeen-year-old son; Isaiah Middleton, 19; Charles Middleton, 18; and 21-year-old dive master, Emmanuel Villanueva. They all pleaded not guilty to the charge.

The 17-year-old minor, however, attempted to plead guilty for possession of the pipe, but the Magistrate entered an equivocal not guilty plea, after he disagreed with the assertion that the pipe was used for smoking drugs.

He told Stewart that he tried to tell the police officer who found the pipe in the yard where they were that they were not using the pipe to smoke drugs.