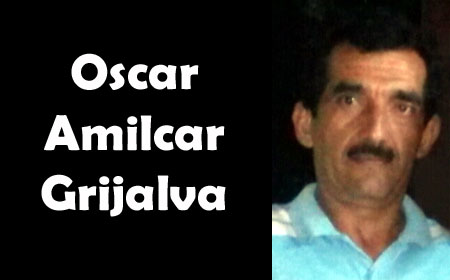 BELIZE CITY, Fri. Mar. 6, 2015–Belize City Police are on the hunt for the female companion of Oscar Amilcar Grijalva, 49, a caretaker of Ontario, Cayo District, who was found riddled with stab wounds to the upper body at around 3:50 p.m. today at Isabel Guest House on Albert Street.

The couple reportedly arrived at the guest house at around 11:30 this morning, and after Grijalva paid for one of the rooms, they proceeded upstairs to the second floor, where there are other guest rooms and a shared hall area.

Police reported that hours later, Grijalva was found lying face up inside the bathroom of room # 1 with injuries to the chest, a cut wound to his throat, and stab wounds to both arms.

Officer in Charge of the Belize District Crimes Investigation Branch, Superintendent Hilberto Romero, told us at a press briefing today that an employee of the guesthouse made the gruesome discovery when she went into the room to check on Grijalva.

According to the owner of the establishment, it appears that there was a struggle, as a lamp was found broken on the floor.

She told the media that the female guest left the building about four hours after they arrived, at around 2:30 p.m., dressed in full black, which she was not wearing when she came, saying she was going to buy something around the corner.

“When she opened the door, she saw a lot of blood on the bed, but the man was not on the bed, so she stuck her head in the room and noticed that the body of the man was in the bathroom. No one knows how it happened”, the owner mentioned.

Romero indicated that a motive for the violent slaying has not been established as yet; however, investigators know that the victim had an undisclosed amount of money on him – money that he had come to Belize City to collect in order to pay a group of workers who were back in Ontario.

The murder weapon has not been recovered, and we were also told that the female suspect, who was described as “heavy-set”, was taller than Grijalva and seemed to be in her late 20s.
Apart from changing her attire, the woman reportedly left wearing dark shades that she was not sporting when she first arrived.

The body of Grijalva now lies at the Karl Heusner Memorial Hospital morgue awaiting a post-mortem, while police continue their investigations.