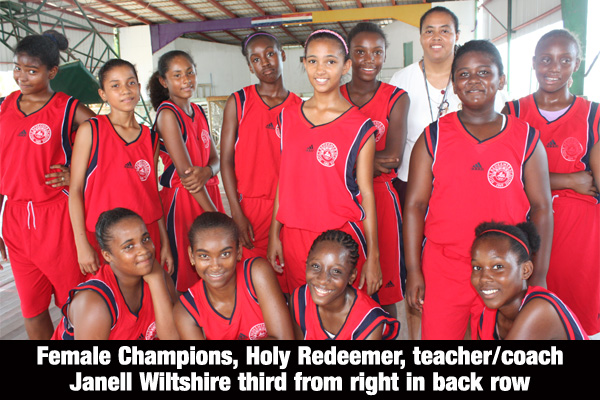 Attending students and a few accompanying parents were treated to two fantastic basketball thrillers this afternoon at Bird’s Isle, where the Sports Council supervised tournament featured the female and male Finals of the Belize City primary schools basketball tournament. Sixteen (16) male and seven (7) female teams participated in the tournament, which just tipped off a couple weeks ago on Monday, April 15.

The male semifinals were held on Tuesday of this week, and we got to see a bunch of talented youngsters in tough competition, whetting our appetite for the Finals. Ephesus SDA prevailed, 31-26, over a game St. John Vianney squad in the first male semifinal, with Antaun Palacio and Delbert Sabal netting 13 points apiece for the winners, while James Pugh Ephesus SDA was Delbert Sabal, who led them to victory with 10 points, including some clutch free throws. Deon Edwards had 8 points for St. Martin’s. scored 8 pts for the losers. In the other semifinal, it was St. Martin De Porres dominating the smaller sized Wesley Upper boys, 28-14, with Glen Arzu leading St. Martin’s with 10 pts, while Jahmar Harris had 14 pts for Wesley.

This afternoon, we were first treated to the female championship game between Belize Elementary and Holy Redeemer, and this one went down to the wire, ending in dramatic fashion, with two clutch free throws to secure the come from behind victory for Holy Redeemer in the last few seconds of the game. Belize Elementary’s Chelsea Williams led all scorers with 9 points, but her tremendous defensive effort for Elementary resulted in her fouling out early in second half. Zaria Jenkins top scored for Holy Redeemer, but it was her teammate, Felisha Arzu, who rose to the occasion and clinched the championship for her team. Elementary had the lead, 12-11, with 11 seconds remaining, when Holy Redeemer’s Felisha Arzu was fouled on a drive to the basket, and, surprisingly, Holy Redeemer teacher/coach Janell Wiltshire immediately called a timeout, sensing that her player needed to settle down and catch her breath. Then, with all their hopes hanging on her two free throws, Felisha calmly connected on both, giving her team the 13-12 lead, and that’s how it ended 11 seconds later to the ecstatic shrieks of joy and jubilation from the Holy Redeemer students/fans in attendance.

That game ended in regulation, but the male Finals, between St. Martin De Porres and Ephesus SDA was even more exciting, this one even going to overtime, after ending deadlocked at 21-21 in regulation. With a number of lead changes, it finally climaxed at 28-27 for Ephesus SDA, but it could have gone either way. It is our understanding that both 1st and 2nd place teams will represent Belize City in the district finals, and you won’t want to miss those. These kids are worth your watching, and they deserve a massive crowd in a plush arena. There are many talented and heroic players on both teams, but without a doubt, the “main man” on Ephesus SDA was Delbert Sabal, who led them to victory with 10 points, including some clutch free throws. Deon Edwards had 8 points for St. Martin’s.