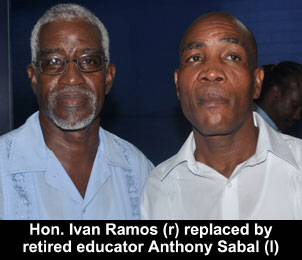 BELIZE CITY, Wed. May 13, 2015–After its devastating defeat in the March 2015 Municipal Elections, the Opposition People’s United Party (PUP), in conducting its own post-mortem, announced that it would engage in a serious process of self-examination and introspection that would enable it to win the next general elections.

This morning, the PUP’s national campaign manager, Godfrey Smith, reiterated that position when he told the media, “And so this morning’s press presentation is a result of that ongoing process that the PUP is engaged in of self-examination and getting itself in the fittest possible fighting form for the general elections.”

The main news coming out of the press briefing was that the PUP has decided to replace its freshman parliamentarian Hon. Ivan Ramos, current area representative of Dangriga, as its standard bearer. Party Leader, Hon. Francis Fonseca made the announcement that Anthony Sabal, a retired career educator, will replace Ramos as the PUP’s Dangriga standard bearer.

That Ramos has been replaced came as a surprise to political observers, especially since the PUP had adopted the policy earlier that sitting area representatives would not be challenged in conventions, making their standard bearer positions safe.

It appears, however, that that is no longer the policy the Party will follow in light of its poor performance in the Municipal Elections and Leader Fonseca’s declaration in his first post-election press briefing that “everything will be on the table,” as the party moves forward with its self-examination.

The word in PUP circles is that more standard bearers are to be replaced, as the Party continues in its make-over image mode to become more appealing to voters.

“Our discussions in Dangriga have brought us here today to report to the Belizean people in effect the changing of the guard in Dangriga. I want to use the few minutes that I am here to acknowledge the Hon. Ivan Ramos for the tremendous work that he has done on behalf of the PUP. Ivan was elected to the National Assembly in 2012, but those who know him and especially the people of the south who know him best will know that he is involved in the work of the PUP since 1985, since he was a very, very young man, and he still is very young.

Fonseca added, “He will of course continue to work with the party and serve out his term as area representative for Dangriga, and he will do so, as he has always done, with distinction.”

Even though the PUP leader made it sound as if though there was no resistance to the Party’s changing of the guard in Dangriga, that sentiment did not come across when Ramos addressed the press briefing.

Ramos said… “As a party, we are at a crossroad, and I have listened to the call for change. I want to say to my party that I believe yes, change; yes, you want that assurance that we will form the government. But let me give a word of caution. Be careful what you are doing. I ask that you be careful what you are doing. I am not a person that talks too much; especially, I don’t entertain idle talk. I hate idle talk.”

As Ramos continued to speak, it became apparent that he was not fully complicit in his own removal.

He declared, “This party has been engaged in too much idle talk and it is hurting the party. It is something that I’ve said around the table before and I am saying it again. You will cause your own destruction if you don’t desist from this behavior.

“In Dangriga, my brothers and sisters, the fundamentals are still the same: joblessness, lack of opportunities and more so when it comes to our young people. I wanted, in fact, my involvement in politics was to change these circumstances into something better. And my fight, answering the call at the time, was to do just that. I want to challenge Mr. Sabal and the rest of us that it is not always about politics. Yes, that is important; that is how governments are formed; but the people of Dangriga, Sarawee and Hope Creek want somebody that will stand for them …”

Sabal, who has spent 30 years as a teacher and education administrator, said, “Mr. Ramos, what you wanted to achieve and couldn’t because we were in Opposition, I will achieve. We must step forward and do our share. Something is wrong is our beloved Belize. Some things are definitely wrong. We cannot sweep them under the rug; we cannot just theorize or worse, we cannot wait for someone else to solve them.

“Being quiet about wrongdoings causes those who look up to us to think that nothing is wrong and if we are not careful, these things become the norm. At some point in time, we must do our share. We need to re-energize our party. Family members and first and foremost family members of the PUP, we must listen to each other and find solutions. We must reaffirm our social contract with the Belizean people.”