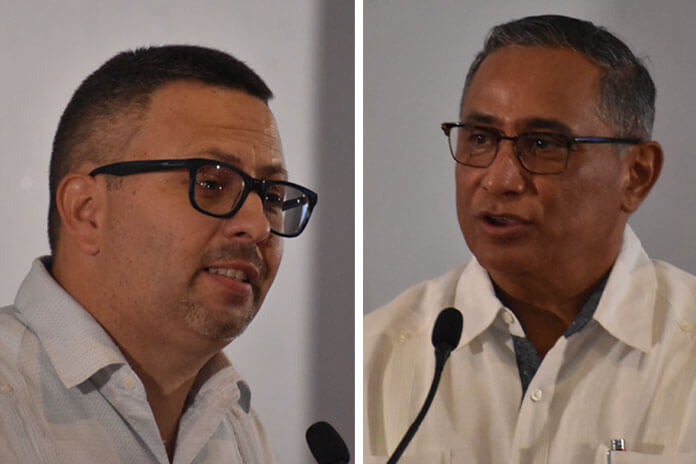 BELIZE CITY, Thurs. Feb. 13, 2020– The Opposition People’s United Party held a press conference this morning at the Princess Ramada Hotel, and several policy positions were put forward ahead of the party’s general election manifesto. The major announcement coming out of today’s press briefing, however, is that the PUP is planning to mobilize in the streets in a massive show of force.

Turning to the major political story of the week, Briceño (area representative for Orange Walk Central) called out the Prime Minister for his handling of the John Saldivar debacle involving US accused fraudster, Lev Dermen.

Briceño said that it was only after Jacob Kingston testified under oath and text messages were released that the Prime Minister finally acted.

“As I said yesterday, this is an insult to the Belizean people,” Briceño added. “John Saldivar was suspended from Cabinet; therefore, Dean Barrow lied.”

Briceño said that the Prime Minister promised that he would fire any of his Cabinet ministers who were implicated in the Lev Dermen scandal.

PUP Chairman, Henry Charles Usher, chimed in, saying, “Yesterday, the nation witnessed part two of an elaborate hoax orchestrated by a lame duck Prime Minister trying desperately to save his bruised ego and salvage his damaged legacy. Sunday’s convention was a sham.”

Usher said the only way to purge Belize of the corruption that is in every ministry is to call an election. “The mandate of the UDP has expired,” Usher declared.

Kareem Musa (Caribbean Shores area representative) likened what has been happening in the UDP to a Netflix series. “We have been gripped by the chaos, drama and disaster that Dean Barrow has designed and directed, pretending as usual, that he is just trying to do the right thing,” he said.

Musa took aim at Barrow for the spending of over one billion dollars without parliamentary approval.

PUP leader Briceño declared that the PUP is not prepared to support any constitutional amendment to fix the unauthorized spending of the Barrow government.

The PUP will ensure an independent Public Accounts Committee, which will be removed from the control of the governing party, he pledged.

In addition, the PUP also promised that there will be House of Representatives meetings once per month.

All contracts that were issued without the approval of the Contractor General will be reviewed, and the PUP will instruct its legal team to get copies of all warrants that were issued by the Ministry of Finance, the party has promised.

The PUP is also saying that it will demand that Senator Aldo Salazar release the Senate Select Committee report.

The PUP has also promised that it will not only enable the United Nations Convention Against Corruption (UNCAC), but will also draft campaign finance regulations.