PUP will introduce Motion of No Confidence in the House 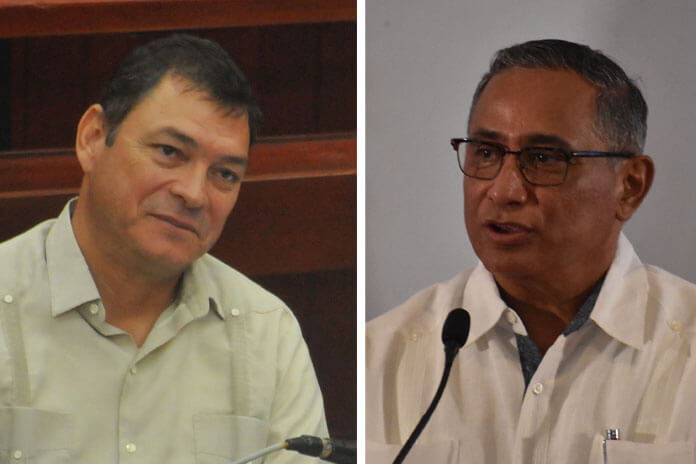 BELIZE CITY, Thurs. Feb. 27, 2020– In the wake of a number of scandals and a major court judgment that have buffeted the United Democratic Party (UDP) government of Prime Minister Dean O. Barrow, the Opposition, the People’s United Party (PUP), has drafted a Motion of No Confidence that it is planning to introduce in the House of Representatives at its next sitting on Thursday, March 5.

The Motion of No Confidence, which is a first in the post-independence parliamentary existence of Belize, would require the support vote of some members from the government side of the House.

While that support is unlikely, the Leader of the Opposition, Hon. John Briceño (Orange Walk Central area representative) and the Chairman of the Public Accounts Committee, Hon. Julius Espat (Cayo South area representative), who are the sponsors of the motion, are not deterred from bringing their motion to the floor of the House so that it can be debated and the House can be divided for a vote on it.

The PUP Motion of No Confidence will be a Private Members Bill that is supported by Standing Orders 25, 26(2) and 31 of the Standing Orders of the House of Representatives, and by Section 37(4), of the Constitution of Belize, which would require the Prime Minister to resign if the motion succeeds.

In a telephone interview today, we asked Hon. Briceño how he plans to go about presenting the Motion of No Confidence, and if he has the support to pull off such a motion.
“The first and most important point is that it is important for us to be able to go to the House and say that we have lost confidence in the government. And we have lost confidence in the government because of all the things that we have listed,” Hon. Briceño replied.

Since the Supreme Court issued the judgment, PM Barrow’s only public statement on the ruling has been an announcement that he plans to appeal.

Apart from the Supreme Court ruling, Hon. Briceño pointed to a long list of issues facing the Prime Minister and, he said, “it would be good for us to go to the House and have the debate; and it would be good if we can win the vote of No Confidence. But for that to happen, we would have to have a number of UDPs supporting the motion.”