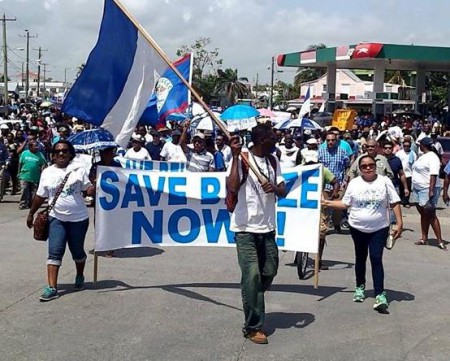 BELIZE CITY, Wed. Sept. 7, 2016–The Opposition People’s United Party (PUP) launched one of its biggest protests in the streets of the city this morning, as thousands of PUP supporters from across the 31 electoral constituencies converged on the old capital in an energetic sea of blue and white, many of them carrying placards condemning the systemic corruption of the Dean Barrow-led United Democratic Party government.

This morning’s protest comes exactly one week after the PUP mobilized its supporters last Wednesday in support of its senators, whose motion for a Senate Select Committee to investigate the findings contained in the Auditor General’s report on the Immigration Department for the period 2011 to 2013 was voted down by government senators.

The audit report on the Immigration Department for which Auditor General Dorothy Bradley has attracted savage attacks from government politicians, many of whom are named in the report as facilitators for the issuance of Belize nationality certificates, passports and visas to large numbers of unqualified applicants, has been the catalyst in the wave of protest against the Barrow-led government.

Many PUP supporters from the far reaches of the country woke before the crack of dawn to board buses that would transport them to the BTL Constitution Park, where the massive crowd began assembling around 9:00 a.m., for the march to BTL Park on Newtown Barracks, where the march ended in a rally of speeches from PUP leaders.

Hon. Rodwell Ferguson, the Stann Creek West area representative, told Amandala that Prime Minister Barrow has given corruption a new name. It’s time for a change of government, he said.

The Cayo South area representative, Hon. Julius Espat, who was dragged out of the House of Representatives by police after being ejected by the Speaker of the House for remarks he made when he attempted to speak on the Auditor General’s report, commented, “I am here for reform and change. The system is just not working for our people. We need to drastically change the system.”

“I cannot say, but our people are saying enough is enough. But if he [PM Dean Barrow] chooses not to listen to the people, he will have to face the consequences.”

Requena told Amandala that he brought out 500 persons from his constituency.

“Why is it important for you and your people to be here?”, Amandala asked Hon. Abelardo Mai, the Orange Walk South area representative.

Mai replied, “We have to show that the PUP is alive and that the UDP are corrupt. The country is in a mess.”

Amandala asked the Caribbean Shores area representative Hon. Kareem Musa to explain the importance of his presence at the Save Belize protest.

“It is not only important for me; the people of Belize are fed up; they are sick and tired of all the lies and cover-ups of this Prime Minister. There is corruption in his government in every single department, and it is time to bring them down,” Hon. Musa responded. “The people have had enough.”

Hon. Musa added, “The teachers and public officers are demanding their raise. I can see where this will be a sustained campaign against this government. We will overcome this government.”

The Mayor of Orange Walk Town, His Worship Kevin Bernard, remarked, “I am here to tell this government to shape up or ship out.”

Maria Roaches, a resident of Punta Gorda Town, who left her home around 4:00 a.m., told Amandala, “I am out here, because this is a time when every Belizean should be out here.”

Roaches said that regardless of which political party we support as individuals, corruption affects all of us. “There is no secret about what is happening in this country. It is inevitable: This government has to go”, she said.

Hon. Cordel Hyde, the area representative for Lake Independence, told Amandala, “We have been tolerating nonsense in this country for too long.”

“We have been tolerating corruption for too long. It’s time we step up and let those people know that they have been doing the wrong thing for too long. We cannot expect them to do the right thing on their own. The streets have to push them. We saw the churches do it more than once, now they are finally paying attention to the churches,” he remarked.

Hon. Hyde said that after today, Dean Barrow will see that the people are tired of corruption. “I hope he is not blind,” he said.

The PUP leader, Hon. John Briceño, area representative for the Orange Walk Central constituency, told Amandala, “We are very excited and very appreciative that the Belizean people have been able to mobilize in such a short time.”

“We need to put Dean Barrow and his corrupt UDP government on notice that if they can’t get their act together, it’s time for them to leave,” he said.
“Are you planning additional protests after today?”, Amandala asked the PUP leader.

“Well, it all depends; the party is getting more energized and we are taking more to the streets. We will not allow the government to cover up the corruption that has taken place in the Immigration Department,” he said.

Briceño noted that no less than 13 Ministers of the UDP government have been named in the Auditor General’s report.

Amandala asked the PUP Leader if the party will seek a judicial review of the voting in the Senate last week.

“We are certainly looking at all avenues of what the next step will be. Who was the Chairman of the Social Security Board Senate investigation? None other than Senator Godwin Hulse,” Hon. Briceño said.

About his feelings about a bi-cameral committee to investigate the immigration scandal, Hon. Briceño said, “It is a waste of time. The Prime Minister has already said that he will have a majority of six. The senator for the private sector cannot be a member of the committee. What good faith is the Prime Minister showing?”

Hon. Fonseca said the UDP government is blocking the inquiry into the immigration scandal and every other attempt to look into the Immigration Department.

Amandala asked PUP Senator, Hon. Eamon Courtenay, if two UDP Senators, Hulse and Carla Barnett, who are named in the Auditor General’s Report, should have voted on the Opposition Senate motion.

Hon. Courtenay replied, “I think everybody knows that the Hon. Godwin Hulse has reached a position where he is comfortable being in a conflict of interest, where he is comfortable in not discharging his constitutional obligation, which is to obey the rule of law, to not put himself in a conflict of interest. I know he must have had serious qualms of conscience in having to vote the way he voted. He is voting a cover-up. He is for something in which his name is implicated, and I think that he knows what he did was wrong. He is on the wrong side of history. He knows that he was voting for a cover-up, and we condemn it absolutely and unconditionally.”

“What are your feelings about the government’s suggesting about a bi-cameral investigation?” we asked.

“It is the biggest fraud that has ever been perpetuated on this country. First of all, the Prime Minister himself, when he was Leader of the Opposition, rejected this similar proposal from the Government of Belize with respect to the Social Security and DFC investigations. Now that the shoe is on the other foot, he wants to come and present himself as a paragon of virtue. He knows better than that.

He added, “We in the PUP will not rest until an independent investigation is done by the Senate. And I want to say this emphatically — the Churches, the Belize Chamber of Commerce and Industry are betraying the Belizean people when they agree to this cover-up, bi-cameral committee of the government, and we are going to be engaging with them to reverse that position.”

Attorney Bryan Neal told Amandala, “There comes a time when you have to stand up for your country, for what is right. So I am here standing up with the people for my country and for my party. People are tired, people are poor and I am here to support them.”

The PUP Chairman, Henry Charles Usher, said that he is very proud of the Belizean people for coming out against corruption. “The PUP will keep up the pressure to make sure that the message is sent clearly,” Usher said.