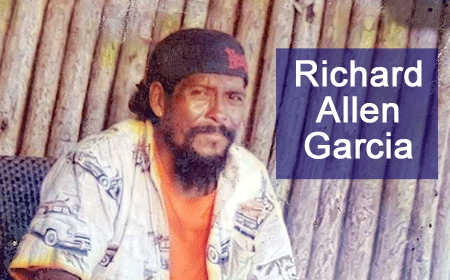 CHUNOX, Corozal District, Mon. June 12, 2017–At around 5 o’clock on Friday evening, a villager at the center of a civil dispute lost his life at the hands of four Corozal cops armed with high-powered rifles.

A post-mortem examination revealed that Richard Allen Garcia, 44, affectionately known as “Charlie,” died from multiple gunshot wounds to his face and thorax regions.

Villagers told Amandala that they heard as many as thirty gunshots and in the end, Garcia, who had just returned from a day of farm work, would be killed on the spot while two nearby homes and a vehicle would be left riddled with bullet holes.

Additionally, a bullet would find its mark inches away from Ronaldo Moh’s head while he was unsuspectingly attending to customers inside his nearby grocery shop.

When villagers learned that a man they described as a “peaceful, humble and hardworking” member of their community was murdered like a “dog” for no apparent reason, they quickly directed their anger toward the murderous cops.

Rocks, mangoes and other solid items were hurled at the officers, who then fired several warning shots in the air, but according to villagers, the “killer cops” ran out of ammunition and locked themselves inside the victim’s shack for safety.

The two police trucks which had carried them into the village were extensively damaged by the enraged villagers.

The “killer cops” managed to flee the area and in so doing, left Garcia’s body behind until around 11 a.m. on Saturday when they returned with about 10-12 patrol trucks which included the Gang Suppression Unit (GSU) and officers from the Professional Standards Branch of the Police Department.

Today, the Officer Commanding Corozal Police, Senior Superintendent Dennis Arnold, conceded that he was the one who gave the order for this operation.

According to him, in March of this year, Garcia’s landlady visited the police station explaining that Garcia was ordered by her to leave the premises, but refused to do so.

Arnold claimed that over three months ago, Garcia, armed with a machete, threatened the landlady’s life.

Since then, Arnold claimed, police have not been able to locate Garcia until Friday.

“When the officer knocked at the [Garcia’s] door, he opened it and just came out with the machete swinging,” alleged Arnold.
According to him, “the officer backed up and fell on the ground.”

“It was then that the other officer fired a couple warning shots. Mr. Garcia didn’t ease, he didn’t stop, he intended to chop the officer. That was when the fatal shot caught him,” Arnold explained.

When the media pressed why the officers were so heavily armed to subdue just one man, Arnold would claim, “The officers didn’t know what they were going to meet… it’s best you go over armed than to go under-armed.”

Amandala has had very different stories from villagers. Firstly, they told our newspaper that Garcia had been ordered to leave the dilapidated shack where he lived within the next three weeks.

However, he was making every effort to do so before the three weeks expired.

Secondly, villagers revealed that Garcia was often inebriated, but the consensus was that he never made anyone feel unsafe or caused any harm.

Additionally, villagers told Amandala that there was no machete seen near Garcia when he was killed. Video footage provided by the villagers to our newspaper has supported this claim.

According to the villagers, if any machete was collected as evidence against Garcia, that machete was planted by police.
Residents of Chunox further claimed that the officers who killed Garcia had been at the Orchid Bay Resort consuming alcohol hours before they took his life.

Sources close to the Orchid Bay Resort have confirmed to Amandala that the officers were indeed at that resort on Friday afternoon.

Though Corozal police maintain that Garcia was a threat to his community, villagers believe very differently, and so they voluntarily pooled their resources to give him a proper burial on Sunday.

Garcia lived alone and died alone. According to OC Arnold, the Police Department’s Professional and Standards Branch will investigate this killing, which has interrupted the peace in Chunox and given the Police Department another “black eye” in their efforts to have citizens to view them as friends and protectors, rather than someone to run from.