Former rap artist “Bobo Youth” fished out of the river 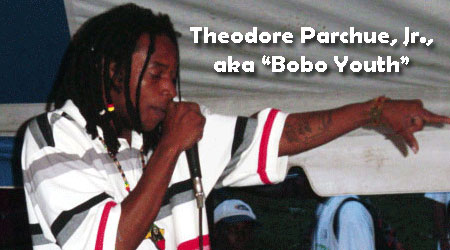 BELIZE CITY, Thurs. Aug. 27, 2015–A fisherman from Hattieville had an unnerving experience yesterday morning that made him run off, leaving his fishing net in the river near the BelCan Bridge.

Herman Lawrence Williams, 39, felt something heavy tugging on his net, and as he began pulling on the net, he saw a human hand in the net, coming out of the water

Williams dropped his net and ran, out of fright.

Williams managed to find two policemen and told them of his “find.”

Within a few minutes, a curious crowd was gathering on top of the Belcan Bridge, staring below at the body of a man near the shoreline.

There were murmurs in the crowd, as some people began saying, “that man is Bobo Youth, he hang around this area a lot.”

Without any regard for the dignity of the dead man, one woman pulled out her cell phone and shot a picture, saying, “I wah post this on Facebook right now.”

Police scenes of crime vehicles arrived and within a few minutes pulled the body out of the water.

Today, Thursday, police reported that the man, Theodore Parchue, Jr., 34, was an epileptic and was treated at the Karl Heusner Memorial Hospital as recently as this past Sunday for an epileptic seizure and head trauma.

Police reported that there were no signs of violence on the body, and therefore, no foul play was suspected. The police report went even further, without the concluded cause of death being established by a post-mortem.

They said that Parchue had drowned. “The body now awaits a post-mortem examination,” the report concluded.

About 9 years ago, Bobo Youth was a rapping sensation with his searing criticism of police in his song “Protect and Serve.”  Another of his big hit was “Love is the answer.”

But after he was found guilty of a burglary and sentenced to prison time, his life took a tragic turn, as he became homeless and took refuge under the BelCan Bridge, where he was seen alive hours before his body was discovered.

Williams explained how he ended up pulling Parchue out of the water: “ I feel the net hook pan something like a piece of board, and I di haul it, haul it and when I look, I see a hand di come like this, so and I just let go the net and I run come on land.

“And when I look I see two officers and I just hail them, and they come and then when they haul the net a lee bit more, they see da wa man deh so.

“It’s fortunate for he because then you know a lot of crocodile deh round the spot and thing, and maybe he drift go more and crocodile carry ah, or maybe he drift go, you know. And then maybe we don’t even find ah. So it’s good how I haul him in.”

Williams was along with a 12-year-old minor when Parchue’s body was fished out of the river.