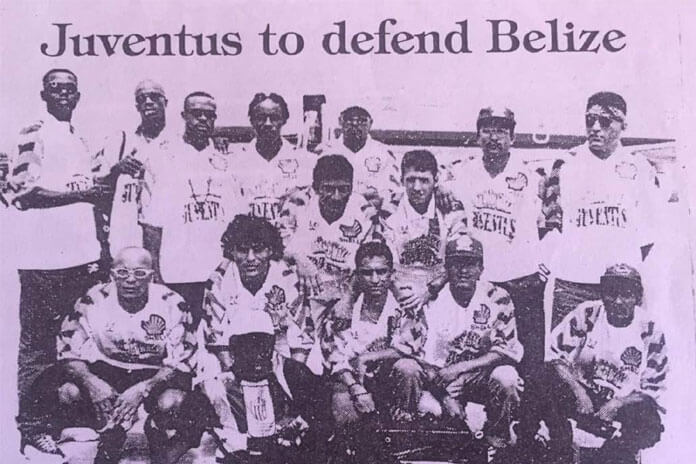 BELIZE CITY, Tues. Apr. 28, 2020– It was certainly an apt Amandala headline story dated Sunday, June 1, 1997, that hit the streets on Friday, May 30, and read: “Oh, happy day! Belize 4, Honduras 1”; and, though the Belize football community certainly celebrated the big CONCACAF victory for Juventus over España, in the absence of video footage of the event, fans across the country perhaps never fully grasped the enormity of the achievement for Belize football, or the massive impact felt in Honduras, one of the perennial “powerhouses” in Central American football.

It is true that back in April of 1989, Coca Cola Milpros of Belize had made a major milestone, playing through a first round of CONCACAF with their victory (3-0, and 1-1) against Diriangen General of Nicaragua. But in those amateur days, both Belize and Nicaragua were considered among the “whipping boys” of Central American football. But now, following the advent of our semipro football league in 1991, we were finally making a mark against the “Big Boys.” For a Belize team to not just defeat, but to “bomb” the renowned Real España of Honduras, 4-1, on their own home turf in San Pedro Sula, was earth shaking. After their 1-0 win over Juventus in Orange Walk the previous Sunday, Honduran fans were looking forward to a rout of the Belize team on Wednesday night in San Pedro Sula, and a huge crowd was in attendance to see España secure their berth in the second round of CONCACAF competition. But they got the shock of their lives.

Amandala, which had lobbied strongly for the birth of semipro football in Belize, had ample reason to be ecstatic in celebration of the monstrous victory, declaring that “Belize football came of age on Wednesday night when Juventus of Orange Walk and Belize bombed Real España of Honduras 4-1 in San Pedro Sula’s Francisco Morazan Stadium.” By then the semipro league had changed its name to the Belize Football League (BFL).

Amandala’s Ernesto Bey, with assistance from then BFL president, Nick Pollard, Jr., was the only Belize newspaper reporter at the event, which was also attended by two representatives from an Orange Walk radio station, so that “the only live commentary in Belize when history was being made, was taking place on Estereo Amor, monitoring a radio station in Honduras.” According to Amandala’s headline story, the “Honduras’ dailies were appalled.” The translations for their various newspaper headlines the next morning were: El Heraldo – “Juventus Eliminates And Disgraces España;” El Dia – “What Pain For Real España;” Tiempo – “What A Shame;” and La Prensa – “Stomped On And Trampled.”

But, continued the Amandala story, “The extent of Honduras’ shame was the extent of Belize’s glory last night.”

For the benefit of fans in other districts who couldn’t get the live reports in English on that memorable occasion, we asked former Juventus defender, now ailing and bedridden, but still mentally sharp Eian “Coco” Henry to give us some of his recollections from that historic game in San Pedro Sula. Coco had shared the Amandala headline clipping with us (and on Facebook), which revealed that then coach of Juventus was Mexican Renan Arturo Cuouh, who was also at the time the coach for the Belize national selection, and later served for a number of years as Technical Director for the Football Federation of Belize. The team manager was Glenn “Banja” Tillett.

Amandala (A): Coco, tell us about that game; we understand that Tilliman (Norman Nunez) was a sensation.

Eian “Coco” Henry (E): After defending our second championship in ’97 (Juventus won 5 national championships), we had the honor of representing Belize in the Concacaf Champion of Champions tournament in our region. Our opponent was the powerhouse of Honduras, Real España. We were huge underdogs heading into the match; but we had Norman “Tilliman” Nunez, and they did not. Thousands of fans filled the stadium, but little did they know we were ready.

As the whistle blew to start the game, we wasted no time, as Manu (David) McCaulay burned the nets in 2 minutes.

But that night belonged to Norman “Tilliman” Nunez, displaying some of the most spectacular skills, electrifying the crowd, adding 2 more goals of his own, to end the half 3-1.

But Norman didn’t hold back in second half either, as he continued to dominate, adding a spectacular third goal to his tally.

It was just ooohhhss and aaahhhss from the crowd whenever he got possession of the ball. To this day, it is one of the most outstanding performances I’ve ever witnessed.

After the game he was swarmed with media personnel trying to get an interview; but what was funny, he couldn’t say a word in Spanish.

A: Is it true that at one point during the game, the crowd was bowing down and making like a wave across the stands in honor of Tilliman?

E: Yea! And they were shouting, “Balla de Plata!” They thought he was a Brazilian.

A: What kind of goals did he score; any headers? Did you guys manage to break down their defence; or did he beat a lot of them by himself to get a shot?

E: Just great individual skills. No header, on the best goalkeeper at the time, the late “Chocolate” (RIP).

A: What was the Juventus line-up and formation like for that game?

E: For that game we played a 3-5-2 formation, with Manu and Tilliman as twin strikers. In midfield, we had Roger Jones on the left, Estevan Hall on the right, Allan “Tubos” Flowers and Freddy Tun as inside defensive midfielders, and Marcelino Tun as attacking midfielder. In defence, Deron Jones on the left; myself, Eian “Coco” Henry on the right; and Mexican Juan Hasso as sweeper. Of course, Charlie Slusher was in goal.

A: You recall the names of players on the bench for that game?

A: Was that the year when Tilliman was supposed to have gotten a contract to play in Honduras?

E: Yaa; right after that game they approached him; and I understand that CD Marathon offered him a contract for $30,000.00 US. After we lost the next series to Platense, and before he returned to Honduras to begin playing for Marathon, he gave a party for the Juventus team and some fans.

A: How long did he stay in Honduras with Marathon before his injury?

E: Tilliman was in Honduras for only about a month, and in his second pre-season exhibition game, his foot was badly broken. He returned home to Belize with his foot in a cast, and never went back to Marathon.

(Amandala Sports Ed. Note: We know that the often controversial Norman “Tilliman” Nunez/Pipersburgh entertained the Belizean football audience for another decade and a half, racking up many more championships along the way with Juventus and a number of other teams. In its heyday, that Juventus squad was a full-fledged professional outfit, and Eian Coco will have to tell us a bit more, when he is feeling stronger, about the fanfare and drama of those glory days in Orange Walk in the 1990s.)

Feature photo: Juventus, shown above arriving in Belize the morning after defeating Real España in San Pedro Sula on May 28, face the vengeful fury of Honduras’s Platense this Sunday afternoon in Orange Walk Town.