Home Features A review of 1991
Features 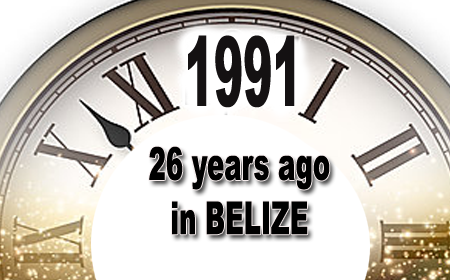 This week, in our year ending issue, we use our editorial space to take a selective look back at 1991.

Early in the year, January 8, the news was upbeat – Belize had officially joined the Organization of American States, and one week later Venezuelan President, Carlos Andres Perez, one of the most powerful leaders in this region, visited Belize and was warmly received.

Belizeans were apprehensive about relatives and friends in the various branches of the United States Armed Forces who were about to be involved in war against Iraq in the Middle East.

Later in January, news of repeated robberies of tourists at Xunantunich were an omen of a troublesome development in the tourist industry later in the year – a travel advisory against Belize issued by the U.S. State Department.

But at the end of January, the visit here of Julian Marley, a son of the late, great Robert Nesta, was cause for much excitement amongst younger Belizeans. Promoter Clinton Lightburn also featured Lee Milo and Jan Lenny on his card.

Early in February, the General Assembly of the Belize National Football Association endorsed the formation of a semi-pro football league.

On February 8, three policemen were sent to jail for possession of 416 pounds of weed.

On February 18, the gang problem entered a City high school campus as two Wesley College students fought with a gun and a machete.

Ralph McField, Frank Dougal and Kirk Pandy died in a traffic accident on the Northern Highway.

On February 27, there was a welcome ceasefire in the Gulf War, but BDF soldiers had to be deployed in Belize City to help the Belize Police Force fight crime.

KBH security guard Elwin Pollard was found shot in the head on March 6, and on March 15, 40 miles further up the Western Highway, retired Canadian couple, Gordon and Barbara Scott were found, also shot in the head. (In December, Hansel Smith and Glen Neal of Roaring Creek were charged with all three murders.)

The Salvador Under-23 Selection beat their Belizean counterparts 2-0 in Belize and 3-0 in Salvador on March 17 and March 24, respectively.

On March 22, roaming gangs of masked men dressed in military fatigues and armed with machine guns, continued the terror in the Corozal District, attacking the Clementino Cob family.

Charlie Lewis, with unified support from other Belizean riders, fought off a serious American challenge to keep the Cross Country garland at home. Belizeans were ecstatic from the Hondo to the Sarstoon.

On April 1, a Tropic Air flight crashed in the sea off San Pedro. All 8 occupants were killed.

The Women Workers Union began a strike on April 8 against the Civic Textile sewing factory in Belmopan.

A Belize Air Operation Airline Service airplane was seized on April 6 after 48 kilos of cocaine were found aboard it in San Pedro Sula, Honduras. The official story was that it was a DEA sting operation gone awry.

The Agri Show was marred by gang violence and murder on April 28. Two Salvapan residents were charged for the murder.

The Social Security Board made another controversial decision in early May when they decided to repair the Newtown Club tennis courts at a cost of $50,000.

5 Spanish Lookout Mennonites kidnapped May 8 by 8 kidnappers and taken into Guatemala were released a week later, claiming they paid no ransom.

After a show of defiance, CTV-9’s Arthur Hoare accepted a Supreme Court decision in favour of plaintiff Richard Gardiner, and allowed Receiver George Swift to take over the operation.

Belizeans Harold Williams and Leroy Tucker, both 21, were shot and killed in separate shooting incidents in Los Angeles on May 31.

A plane crashed near Big Creek on June 3. The occupants blew it up and absconded.

The West Indian Commission visited Belize in mid-June of 1991.

On June 18, Jerson Zetina, a brother of Police Superintendent Carmen Zetina, was kidnapped and found murdered a few days later.

In early July, the Social Security/Vista del Mar land scandal hit the news and was headlines for weeks.

The July 2, 1991 issue of AMANDALA broke the news that the citrus industry was experiencing some problems. World prices had fallen; the Belize crop was relatively poor; there was the threat of the CTV virus; and fear of the Free Trade Agreement.

But on July 11, IMF officials concluded a 3 week visit to Belize, and gave us a “clean bill of health.”

The rape/murder of VSO worker Jill Oborne in Dangriga on August 14 was sensational.

The KREMTRAVAGANZA on August 17 at the Civic Center was a smash hit.

Director of Public Prosecutions Troadio Gonzalez on August 29 appealed $25,000 fines against convicted cocaine traffickers James Swan and Robert Hertular. He felt they were too lenient.

In early September, 41 athletes who participated in the first Belize Games tested positive for drugs. No details were ever given.

One of Belize’s greatest saxophonists ever, Bill Belisle, died on September 5 of a heart attack at the age of 50.

No one in Belize at this time, outside of the House of Representatives, had heard of the Maritime Areas Act, tabled in the House in mid-August.

8 were killed and 11 hospitalized on September 7 after a horrible accident involving a bus and a dump truck on the Northern Highway.

It was announced on September 26 that UDP Deputy Leader Dean Barrow and Foreign Minister Said Musa were to tour Belize to explain developments between Belize and Guatemala. At the same time, it was reported that Guatemalan Foreign Minister Alvaro Arzu Yrigoyen had resigned because of President Serrano’s handling of the Belize question.

The October 4 issue of AMANDALA mentions the Maritime Areas Act by name for the first time and Dean Barrow decides that it is Party Leader Manuel Esquivel who should tour with the Bi-partisan Commission to explain the MAA.

At an October 9 meeting with the Bi-partisan Commission in Punta Gorda, that town appears to reject the MAA by acclamation.

The Friday, October 11 issue of AMANDALA reports that the Belize economy has slowed slightly but perceptibly.

October 19, 1991 – Gabriel Pou is shot and killed at the Central Police Station by a gun allegedly held by AIP Simon Castillo.

The MAA is discussed at Parish Hall on October 25.

On Wednesday, November 6, Sheldon Flowers is finally buried after his parents, Dudley and Venus Flowers, wait more than two weeks for an expert autopsy.

On November 8, Hon. Philip Goldson, resigns from the executive of the Opposition UDP because he disagrees with the party’s handling of the MAA.

A Judicial Inquiry into the circumstances surrounding the death of Sheldon Flowers begins on November 27. Justice George Singh presides.

On December 5, KREM Station Manager Gerald Garbutt is jailed on a minor traffic technicality. It is the first indication of a campaign against KREMANDALA by a faction of the Belize Police Force.

The official vehicle owned by Rueben Campos, Orange Walk member of the House of Representatives, is busted on December 8 with more than 10 kilos of cocaine.

Ellis Taibo is charged on December 9 in Dangriga with the murder of Jill Oborne.

La Victoria of Corozal Town on Sunday, December 15, at the MCC Grounds, win the first ever championship of the Belize Semi-pro Football League (BSFL) by defeating Cemcol/Crown Milpros, 3-1.