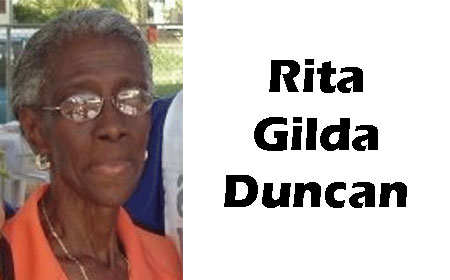 BELIZE CITY, Thurs. Oct. 8, 2015–Rita Gilda Duncan, the towering, gentle matriarch of the Duncan family of Partridge Street, has passed, but the family-togetherness that she inspired in her seven children will live on in the coming generations of her family.

When the Duncan family moved to Lake Independence in 1967, they were among the early pioneers. There were no real streets – the last street ended at Central American Boulevard.

Stephen Duncan recalled that their father was employed at Escalante Bakery, but, referring to what happened after the bakery was destroyed in one of Belize City’s historic fires, he said, “my father had to find a new job and we couldn’t afford to continue living at our home on Wilson Street, so we came to live with our grandmother on this street.”

Stephen explained that his father, Louis Duncan, who had migrated to Belize from Jamaica around the age of 19, eventually left Belize to work in the United States.

Stephen explained that his mother and father were married in 1955 and the union produced seven children – five girls and two boys: Beverly, Stephen, Francine, Kirk, Dawn, Karen and Phillipa. Stephen said that when his father went to work in the US, he sent money to build the family house on Partridge Street.

“I was the supervisor, although I was only about 10 years old,” Stephen recalled, adding that his father died at the age of 50 in 1976, when he (Stephen) was in sixth form.

In describing their mother, Stephen said that the Bible talks about a virtuous woman, and he is convinced that she fits that description. Their father died in 1976, when their mother was around 45-years-old, but she never took another partner, Stephen said.

“She struggled with us, because it was rough after daddy died”, Stephen said.

He explained that after their mother married and began having children, she never worked again. She stayed at home to raise her family.

Stephen said their mother was strict when it came to their education.

“She placed a lot of emphasis on education. Daddy used to make sure that he sat with us around a blackboard in the evening. Both of our parents focused on our education, and for us it has made a world of difference, because, like everybody else, we were poor. We are living much more comfortably now because of education. And we are trying to do the same with our children,” he said.

Stephen said that one of the hallmarks of their family is the togetherness that their mother instilled in them from a very young age.

“We don’t know life without her. She never used to go about and leave her children. She kept this family together. The principles she taught us, we are always thinking ‘brothers and sisters.’ We played games together as a family. Mommy kept us together,” Stephen remarked.