Home Features On the road with Fidel
Features

On the road with Fidel 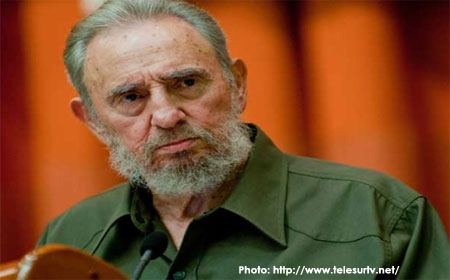 I am in Santiago de Cuba, the Crib of the Revolution, as it is known, named The Heroic City years after the Revolution. It is from a balcony on a central plaza here that Fidel first addressed the Cuban people on V-day, January 1st 1959.

Fidel’s ashes arrived here yesterday, after beginning its journey on Wednesday from Havana. The cortege followed the route, in reverse, of the March of Victory undertaken in 1959 by Fidel and the guerrilla forces from Santiago to Havana. The small caravan, with Fidel’s ashes in an urn carried in a trailer behind an army jeep, passed through all the towns and villages the caravan had traversed in that historic journey, so that most Cubans had the chance to bid their last respects to the physical remains of their leader. It passed the night next to the remains of Che Guevara at the monument in Santa Clara, the following night in Camaguey and the next in Bayamo, Granma, before moving on to Santiago on Saturday.

It was amazing to watch how Cubans of all ages, colours, creeds and occupations lined the roads, villages and towns, most quiet, crying, waving Cuban flags or the flag of the 26th of July Movement, many shouting slogans as the ashes passed by, the most popular being one that had sprouted the day after his death, which I saw by chance as I watched television. A young woman was being interviewed in downtown Havana, and she was told that some Cuban-Americans were jubilantly celebrating in Miami, and she said: “Well tell them not to rush to celebrate. Fidel is physically gone, but his ideas, his example, his teachings and especially his formation of young Cubans is alive, and we are all here committed to live up to his ideals and continue his work. The Cuban people are Fidel, Yo soy Fidel.”

The phrase spread like wildfire, and at the mass rally on Tuesday night the crowd of close to a million people repeatedly chanted that slogan.

Here in Santiago is where the Moncada Barracks is, which Fidel and about a hundred men and women stormed on 26 July 1953. They were militarily defeated by superior forces of the dictator Batista, and most of the youths were brutally murdered after being captured, but the assault sowed the seeds of the Revolution, and is celebrated more than the victory itself on 1 January 1959. It is here that Fidel was put on trial, turning the tables on his accusers in his immortal statement, History Will Absolve Me.

From here I can see the Sierra Maestra mountains, where the guerrilla war was developed, where first a few and then hundreds of mountain people followed by youths from all over Cuba joined the guerrillas and swept the people into power. Here the young girl Vilma Espín was born, she who supported the attack on the Moncada, which is now a school, fought in the Sierra, and went on to form the powerful Federation of Cuban Women and gave impetus to the program of “Circulos” for young children and many other programmes for the education of youth. Here is the birthplace of many of the heroes of the revolution, including Fran País, who was murdered before the victory; many places in Cuba are named after him, including the major hospital in Havana where many Belizean doctors did their training.

Santiago holds such a special place in Cuba that there is a well-known saying, “Santiago es Santiago”, meaning there is no place like it. Cuba is a long island, going from east to west, and Santiago is the at the eastern end, near to Haiti and Jamaica, and many of its people are descendants from those countries. Santiagueros proudly proclaim that it is the most Caribbean City in Cuba, with Black people and Black culture being most prominent here.

It is from here that we got Professor Eduardo Rivero to come to Belize for the tenth anniversary of our independence and form the Belize Dance Company, brilliantly led for years by Althea Sealey. Coming from Havana, one is immediately struck by the extreme cleanliness of the place, its streets and parks and private spaces, compared to the capital and most other places. George Price would have a hard time finding paper and rubbish here to pick up off the streets. People here are proud of their heroic city.

Not far away from here is the Cathedral of the “Virgen del Cobre”, the patron saint of Cuba, to which people from all Cuba and the world make their pilgrimages. I visited the Colegio de Belen, the Jesuit school where Fidel went to college and learnt many of the values he strengthened and pursued.

Juan Almeida was a Black man who was always a close confidant of Fidel. After Che, he was among the first, along with Raúl, to be made a Comandante by Fidel. A huge representation of Almeida, similar to the famous one of Che in the Plaza de la Revolución in Havana, graces a building in the Plaza in Santiago facing the huge statue of Antonio Maceo, a Black independence fighter known as The Bronze Titan. It was to Almeida, then Vice President, that I presented credentials when I was honoured to represent Belize here as ambassador.

He was a very cultured man, known as much for his poems and songs as for his revolutionary fervour. A few years after the Revolution, Fidel sent Almeida here to work as the First Secretary of the Communist Party, and things quickly began to improve. I was told by a Santiaguero here that one day he visited the factory of the Hatuey brewery, a popular beer in Cuba at that time, and the manager there told him it was about to close, because Fidel had said it should be transferred to the province of Holguin. Almeida’s reaction was immediate: “Pues dile a Fidel que no”. The factory stayed in Santiago, and is still here.

Last night the people of Santiago had their last chance to bid farewell to their beloved leader. Over a quarter of a million people went and created their own chants promising Fidel to remain true to his ideas, as well as assuring Raúl that they supported his continuation of Fidel’s work. There were some Heads of State and government present, but this time only Cubans spoke: leaders of the trade union congress, the farmers, the Federation of Women, the federation of combatants (in Cuba and Africa), the university students and the young Communists.

Raúl was the last speaker, and spoke of Fidel’s ideals and his work to unite the Cuban people, as well as his record of putting his internationalist ideals into practice around the world, in Algeria, Vietnam, Africa and the Caribbean and Latin America. Then he made an announcement that left the people in stunned silence and obvious disagreement. After reminding the people that Fidel, a very modest man, was always against any expression of the cult of personality, he made it known that Fidel had made an explicit wish before he died: that no statue or monument of any kind be put up in any plaza, park, or public place, nor should any street be named after him, ever. Raúl explained that his wishes must be respected, and that he would be introducing the draft law to the National Assembly of People’s Power to ensure the fulfilment of that wish.

After the event, I heard many people express their disappointment at this, but they also said that they understood, and that what was important was to keep his spirit and his ideas alive, to live their lives so that Fidel lived on in them, to be true to his definition of what it means to be a revolutionary, to fight imperialism and to struggle unflinchingly to maintain Cuba united, truly independent and sovereign.

It has been strange being here these past two days, a city I have always enjoyed for its constant live vibrant music everywhere, its friendly people, its drunken camaraderie. Now there has been an eerie silence, people avoiding your eyes, not a drink in sight. The people are in mourning.

As I was leaving the Plaza last night I got a call from my good friend Ludwig Palacio from PG. He was with a few Belizeans commemorating Fidel and wanted me to say a few words to them. I couldn’t say much. I was overwhelmed by the thought that there are people in Belize, like the world over, who recognize the greatness of the man, and who celebrate his vision and his work, and who hopefully will continue his indispensable work for the good of mankind.

Fidel always said that what assured the victory of the Revolution was the UNITY of the people, a unity he fought always to achieve above all else. There is a feeling in the air that with his death, the people sense even more the need for unity, and that the unity of the people will be consolidated and strengthened, thus perpetuating one of his greatest legacies.

This morning Fidel’s ashes were placed in the cemetery in Santiago near to the mausoleum of José Martí, his guide and mentor.